Falling Off The Block 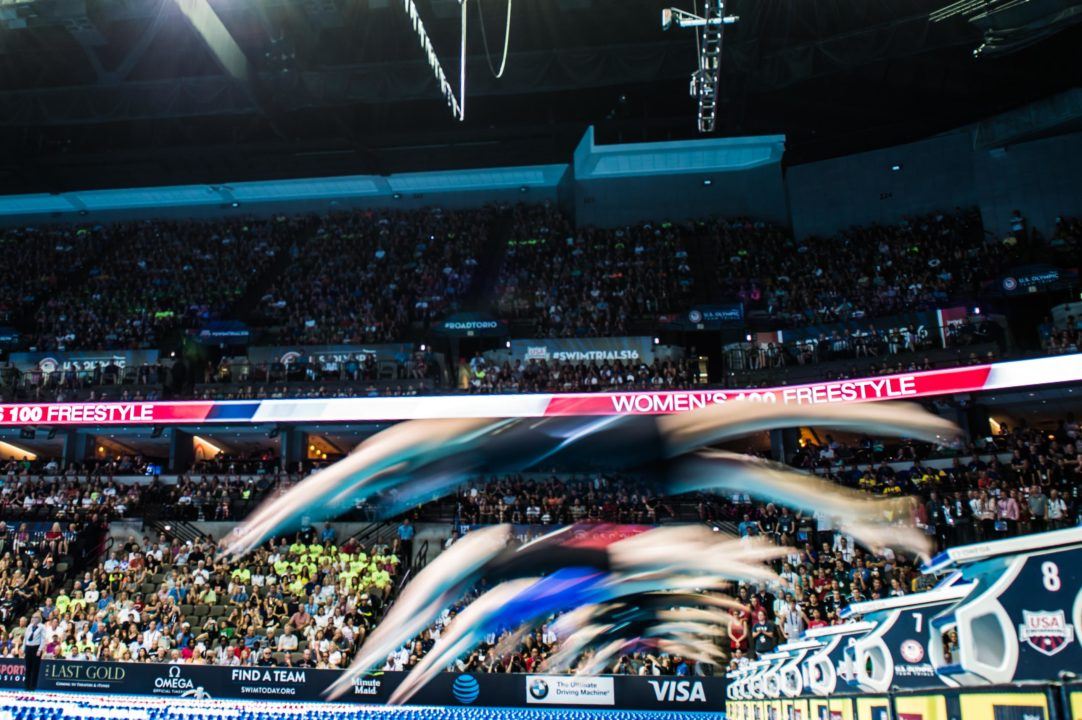 Being an experienced swimmer in college didn't prevent me from having a not-so-graceful tumble off of the blocks, and it happened more than once. Stock photo via Mike Lewis/Ola Vista Photography

Yes, you read that right. I’m going to tell you about the not one, but TWO times that I have had a dramatic fall off of the block. Not only have I had these two epic spills off the block, but they both happened while I was swimming in college, so it was certainly not my first rodeo. So, get that image of a beautiful, fast dive out of your head. These were more of a… Take your mark… SPLAT!

The first time that I face planted in the water was at the end of a relatively normal practice. As a 50 freestyler, I liked to work on my dive a lot. I did a lot of interesting diving drills with my coach, so I was used to playing around with it. While a lot of people pull back on the block when they go to take their mark, I was working with my coach on doing the opposite. He was having me lean my body forward on the block, where my shoulders would be in line over my toes. I’m a pretty tall gal at 5’11’’, and you guys already know that swimmers aren’t the most coordinated, so I had to practice a lot if I was going to change my technique just to get control of my limbs.

So, there I was, spending the few extra minutes we had in the pool once practice ended working on my dive. I’m on the block, and I go to take my mark, knowing I need to lean forward more than the last repetition. So, I lean lean lean lean, and splash! I managed to lean my way so far forward that I lost balance and toppled right into the water. There weren’t too many people on deck to witness this very ungraceful fall, but it was hilarious. After I finally stopped laughing at myself, I climbed back up onto the block and started working on leaning forward again, just maybe not quite so much.

The second and last time that I fell off the block in college happened about a year or so after the first time. However, it happened in a very different fashion. This time around we were in the middle of a sprint team practice.

We were doing one of those sets where you do all out max efforts off the block as a sort of race simulation. The kind of set where you hype everyone up, and your coach does the official three short whistles and one long whistle to get you up on the block. This is the sort of practice where you set out to prove what you can do. So, we’ve already gone through a few max 50s off the block, and I’m behind the block ready for my next one. Now, remember, I’m a sprint freestyler, so this is the kind of practice I lived for. It gave me a chance to hammer out my race strategy, as well as giving us a chance to race our teammates.

My coach blows the whistle, we get on the block. Take your mark, GO! And go I did. I exploded off of the block in the aggressive way that you do when you want to win a sprint. I don’t know if the fin on the back of the block was more slippery than usual, or if I had my foot on the wrong spot, but instead of my back-foot propelling me forward off the block, it slipped. My foot slipped so badly off the back of the block that instead of my momentum pushing me forward at all, it pushed me directly down into the water. I had no control of my descent into the pool. This time around, everyone who wasn’t in my heat saw. My coach looked at me and was like, “how in the world did that happen??” Just like the first time, it was hilarious, and I had to control my laughter to get back on the block and re-do that 50. It’s kind of hard to hold your breath when you can’t stop giggling.

I learned that even the most experienced swimmer can still take a face plant off the block into the water. At the end of the day, it doesn’t really matter how many times you fall off the block, as long as you are able to laugh about it, learn from it, and get back up on the block.

Nicely written. It sounds like that second one could have ended a lot worse. I always appreciate Swimswam publishing pieces like this once in a while.

I’ve seen this end a lot worse. We were doing starts, a swimmer flinched, so I told them to stand up, she tried to hold herself up, rolled, hit *something* (I think the bottom) with her face. This was a week before championship season was scheduled to start. So, she swam our regional meet from a push (the facial lacerations were too severe to take the impact of a dive) and still qualified for the state meet.

From then on, in practice, if I see someone leaning, I just say “go” and correct it after the fact. Freaked me the eff out.

This happened to me on my very first ever 200 fly. Long course of course.