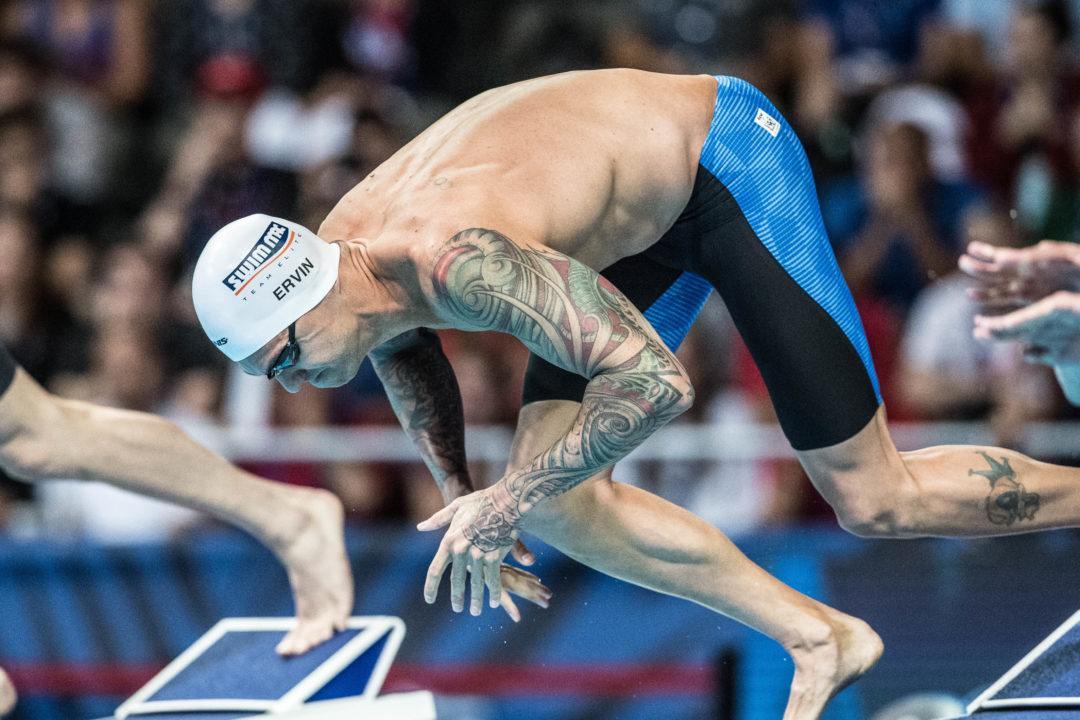 With his second-place finish in the 50 free tonight, 35-year-old Anthony Ervin became the oldest American male swimmer to make the Olympics in an individual event since 1904. Current photo via Mike Lewis/Ola Vista Photography

Tonight, with his second-place finish in the 50 free, 35-year-old Anthony Ervin became the oldest American male swimmer to make the Olympics in an individual event since 1904.

Ervin finished tonight’s event just .01 behind Nathan Adrian, coming into the wall with 21.52.

This will mark Ervin’s third Olympics. He won Olympic gold in the 50 free and Olympic silver in the 400 freestyle relay at the 2000 Olympic Games in Sydney, Australia. He finished fifth at the 2012 London Olympics in the 50 free.

That time ranks him fifth-fastest in the world this year.

His time tonight was also only a tenth of a second off his all-time best, a 21.42 semifinal swim from the 2013 FINA World Championships in Barcelona, Spain. That swim makes him the 14th-fastest man in history. He went on to win the silver medal in that event.

What was most impressive about his 100m swim was his interview after, where he talked about giving swim lessons, then those swimmers came to watch him at the next Trials, now those same swimmers are swimming in the Trials. He was so proud! In a moment that could have been all about him, all he could think about was his impact on those kids! Says a lot about his character, and what a positive impact on the sport!

I read ‘Chasing Water’ wrote in 2016 by Anthony Ervin and Constanine Markides.
In it Ervin details how he swims the 50, how he doesn’t train much and in the 100 he dies, how he was lost in school at U.C. Berkeley.
(note: I schooled in France, and one doesn’t see the nonsense school U.C. Berkeley -or for that matter nonsense schools Harvard, Stanford, etc.- in the serious to education France)
In the book, Ervin describes his own technique in the 50 -as opposed to the technique of distance swimmers he describes and that I practice myself-, and in the book, his former coach at Cal., Mike Bottom, describes Ervin’s 50 technique.
Bottom says that Ervin… Read more »

I was a non-believer at first. But this is pretty bad-ass for age 35. Well done!

I have to admit that until Ervin recently dropped a 21 high I didn’t believe he had a chance. Both of his races exceeded my expectations and hope he keeps it rolling in Rio.

It’s interesting that at trials in 2012 and 2016 he finished 0.01 behind the first place finisher