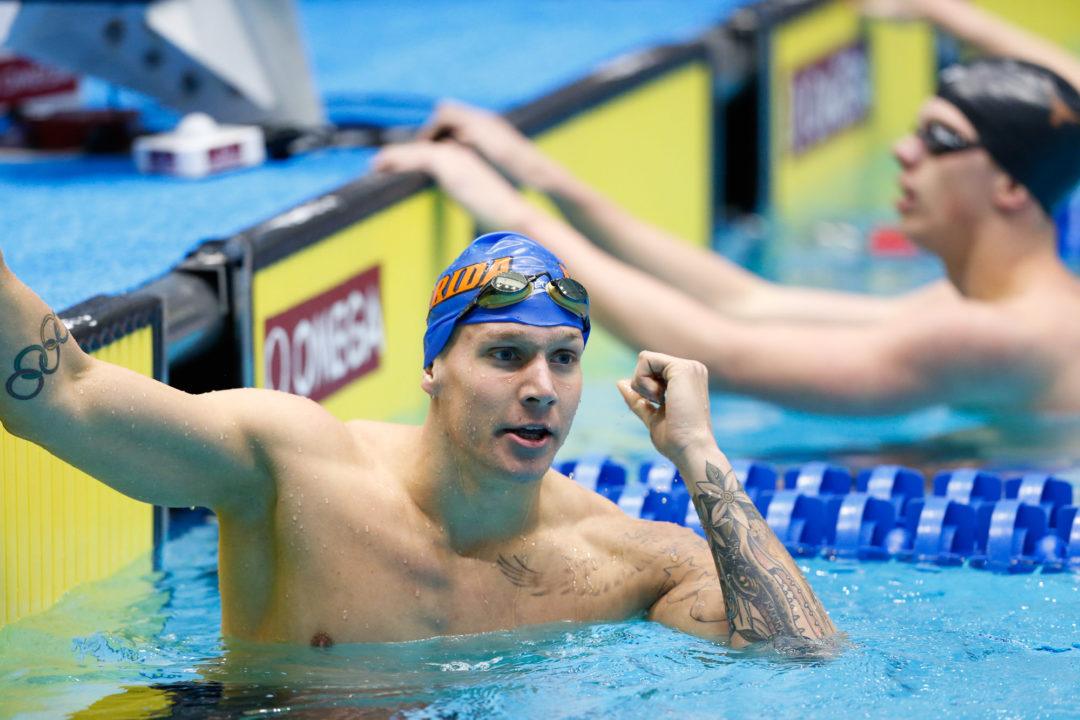 Swimming fans have been wondering if they’d get to see what NCAA champ and American Record holder Caeleb Dressel could do in the long course pool in the 100 fly at World Championship Trials. As psych sheets dropped on Friday morning, it was confirmed that Dressel would swim the 100 fly along with his signature sprint free races. It appears he’ll also be going after a spot on the 800 free relay, as Dressel has entered the 200 free as well.

Dressel had a phenomenal performance in the 100 yard fly this past NCAA season, taking down the American Record with a 43.58. He hasn’t put as much of his focus on the event in long course, however, so it’ll be interesting to see if he swims in the final to challenge the likes of Tom Shields and Jack Conger, among others, for a roster spot in the event.

His best time is currently a 52.22 from the 2016 Olympic Trials, but he’s already been within hundredths of that this season. At the 2017 Arena Pro Swim Series stop in Santa Clara, he narrowly missed it with a 52.29.

Believe it when I see it

Dressel could potentially make it all those events with the 200 being the most questionable. Not many have the raw speed in the 50’s and can still put in a great 100/200.

Typically it seems that the more he rests for the 50 the worse his 200 gets.

Hopefully he can put the full line up together as it would be cool to see for sure.

Ohh yesss , we might see a solid Dressel on the 100 fly

He might finish the top 2 in trials for 100 fly but may not make it to final in worlds.

Swimswam, will there be a pick em for this meet or only worlds?

Regardless, I’d peg Dressel as the favorite in the 50 fly.

DMac – Pick ‘Em Contest is being assembled as we speak!

Entering the event is very far from a confirmation that you’ll swim it. There is no chance he swims all 5 events.

Why not? He would only have one double and it’s 200 free and 50 fly, I don’t know if he will for sure swim them all but I say there is a good chance.

It’s possible he’s vying for a spot on the 200 free relay, all he would need to do would be to swim prelims and put up a strong time and then scratch…Might be to keep his options open in the event he doesn’t qualify in one or two of the others.