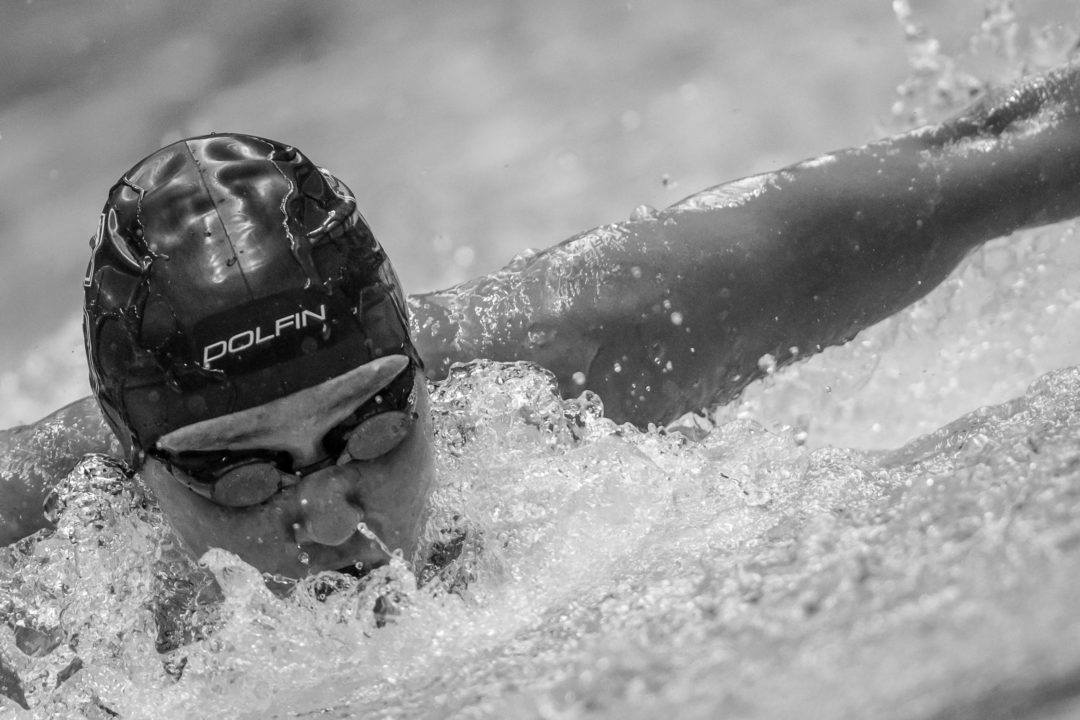 Drabot turned heads earlier this month when she threw down a personal best 1:54.49 in a dual meet against NC State. She demolished that time today, taking down reigning NCAA champ Ella Eastin as she touched in 1:51.74 to Eastin's 1:52.03. Archive photo via Mike Lewis/Ola Vista Photography

The 2017 Art Adamson Invitational continued tonight in College Station, Texas with the 1650 free, 200 back, 100 free, 200 breast, 200 fly, and 400 free relay. The Texas A&M men and women were both victorious in the team standings in front of the home crowd.

On the final night of competition at the 2017 Art Adamson Invite, Stanford’s Katie Drabot had a big swim in the 200 fly. Drabot turned heads earlier this month when she threw down a personal best 1:54.49 in a dual meet against NC State. She demolished that time tonight, taking down reigning NCAA champ Ella Eastin as she touched in 1:51.74 to Eastin’s 1:52.03. Both swimmers were under the NCAA ‘A’ cut.

American distance star Katie Ledecky earned her 4th victory of the weekend for the Stanford Cardinal when she stepped up to the plate for the 1650 free. Ledecky was ready to throw down something special as she chased her own American Record. She took care of business in dominating fashion, breaking the record with a 15:03.31 to win by nearly a minute. Hawaii’s Phoebe Hines trailed in 15:57.76, while Stanford’s Leah Stevens took 3rd in 16:05.47. Both Hines and Stevens are likely to make the NCAA meet with those times, as it took a 16:16.41 to make it last season.

Texas A&M’s Lisa Bratton had an impressive performance in the 200 back. Bratton rolled to a personal best 1:50.10 ahead of Stanford’s backstroke duo of Janet Hu (1:50.66) and Ally Howe (1:51.25). All 3 swimmers shoould comfotably make NCAAs. The Aggies also earned a victory in the men’s version of the event courtesy of Brock Bonetti. After taking off with the early lead, Bonetti continued to push ahead, knocking a second off his best to win in 1:40.56. Behind him, Hawaii’s Metin Aydin put up a 1:41.63, which is just under what it took to make NCAAs last season.

A&M teammates Sydney Pickrem and Bethany Galat battled it out in the 200 breast. Pickrem trailed Arizona State’s Silja Kansakoski (2:07.86) by a hundredth after the first half, but she and Galat surged ahead through the final 100 yards. Pickrem surged to a 2:05.96 victory with Galat following in 2:06.52. Both were under the NCAA ‘A’ cut. The Aggies’ Mauro Castillo Luna is a potential NCAA qualifier in the event on the men’s side. He touched in 1:54.14 to win it, putting him 4 tenths under last season’s NCAA invite time.

We just got a peek at how integral Simone Manuel is for Standford to win NCs.

Agreed, but you can’t base a lot off of the mid-season invitationals in terms on NCAA’s. Although A&M wins here, there are a lot of scorers at this meet that just won’t place when you bring all the teams together at the end for NCAA’s. If Simone were to miss the entire season, the meet would be interesting (mostly because of the huge factor she plays on relays), but I would imagine that Stanford would still have the top-line star power to win.

The scoring for this meet is a little weird because all relays score. Texas A&M had scoring E relays in some events, while Stanford didn’t have more that C relays and had no 800 free relays at all.

She’s amazing, but no one’s coming within 100 points of them, with or without Ms. Manuel.

Might want to change 1500 free to 1650 free in paragraph 2 of Day 2 highlights. Otherwise great article.