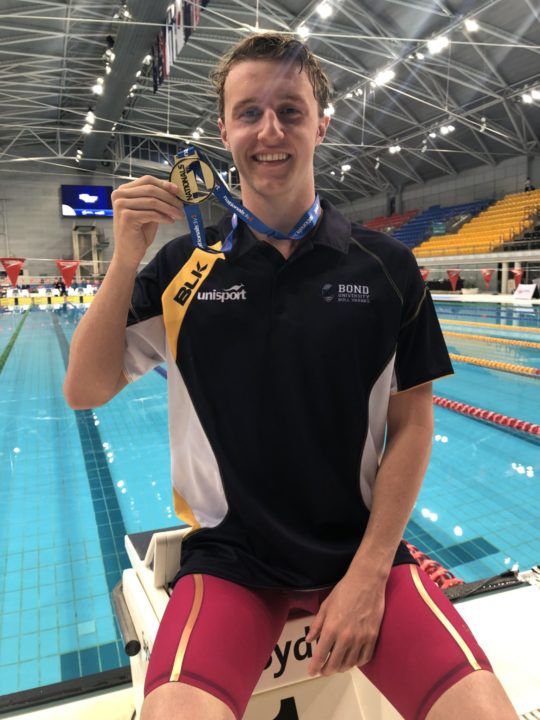 19-year-old Elijah Winnington put the pedal to the 'medal' tonight in Sydney to take 800m free gold ahead of 2 Olympians. Current photo via Hanson Media

19-year-old Bond star Elijah Winnington put the pedal to the ‘medal’ tonight in Sydney, scoring 800m freestyle gold ahead of 2 Olympians. Competing on night 2 of the inaugural Sydney Open, the World Junior Record holder in the LCM 200 free and SCM 400 free raced his way to the top of the podium in a new personal best.

Entering this meet, Winnington had never been under the 8:00 threshold n the event, but tonight the teen cranked out a mark of 7:55.75 to just out-touch Olympian Jack McLoughlin. McLoughlin settled for silver in 7:55.81 while Olympic champion in the 400m, Mack Horton, finished with the bronze well behind in 8:02.01.

Post-race, Winnington said he has no plans on adding the 800m into his freestyle line-up at this point.

“I don’t think I’m going to put the 800 into my program, I’m still focused on the 200 and 400m; it was just a training thing coming in here and working my aerobic capacity,” said Winnington.

“I might do it at Trials but I don’t think it will be a major target; it was really just a bit if fun and a hit out – but I certainly wasn’t expecting to go a seven second pb.

“The reason I won’t focus on it, is because I think it will take away the speed I need for the 200m and I think the 200m helps the 400m, just as much with the easy speed I normally have.

“I’m looking forward to seeing how I will go in my pet events when I’m fully tapered, it means that all the training is coming together and that’s always a positive thing to think about.”

“If Rich [Bond Coach Richard Scarce] and I can work out a way where I can swim the 200m, 400 and the 800m and potentially the 4×100, I would definitely add it in,” said the Commonwealth Games 4x200m freestyle gold medalist.

“It’s not like I dislike the event, I just like others more I guess and when you get to the Olympics and World Championships you want to specialize.

“You would rather be the best in one or two events than average in four or five… it’s just weighing it all up to see how we could do it.”