Back From The Brink, Strauch Logs Wins On Journey To Gwangju 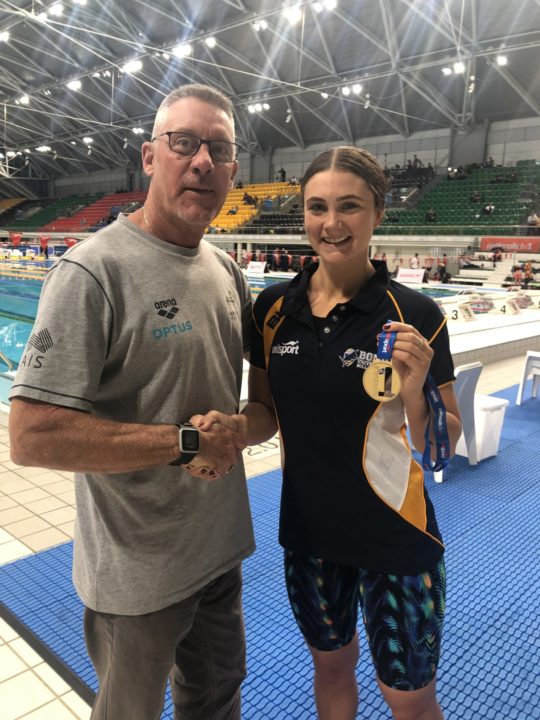 “To make this (World Championship) team would mean everything for me," says 22-year-old Bond swimmer Jenna Strauch. Current photo via Hanson Media

22-year-old Jenna Strauch won the women’s 200m breaststroke tonight in Sydney while competing on night 2 of the inaugural Sydney Open.

The Bond athlete put up her 2nd fastest 200m breaststroke time ever en route to gold tonight, producing a mark of 2:25.39 for the win. The Aussie National Champion’s time held off Tess Wallace with ease, as Wallace finished in 2:27.01 for silver. Olympic finalist in this event, Taylor McKeown of Griffith University, rounded out the top 3 in 2:27.65.

The performance is simply another feather in Strauch’s cap since the once budding junior athlete was sidelined for years with a series of health issues. Strauch actually had made the Junior World Championships squad back in 2013, but contracted 3 parasites and wound up in the hospital for over a year and a half.

Looking back, Strauch describes her misery as, “There would be week stints, day visits – they just couldn’t get rid of it. One parasite was masking the other. I had salmonella poisoning for nine months before they were able to treat that.” (Gold Coast Bulletin)

Now she is back to her old self, relishing her time at Bond University. She competed at the 2018 Short Course World Championships where she finished 22nd in the 100m breast and 11th in the 200m. She followed that up with her first 200m breast national title in Adelaide in April and now completed the 100m/200m breast double here in Sydney.
As for her run of successes, Strauch says, “I’ve put some good swims in the bank so hopefully things will only get better and better – it’s been a lot of hard training like every athlete does but it’s all worth it in the end.

“It’s been a long road for me, to get to this position; so satisfying to actually return to the sport and get back to my best – that has been what has pleased me the most, and been the most rewarding.

“To make this (World Championship) team would mean everything for me…It has been a dream for me and we have Olympics coming up next year so that is the ultimate goal.

“It will get me some exposure hopefully before the big one…the Olympics has been a goal of mine since I was a kid and after getting sick that’s the one thing that brought me back, I desperately wanted to do it..so we’ll see how we go.”