Campbell Produces Another Sub-53, While Seto Takes Out Horton In 4Free 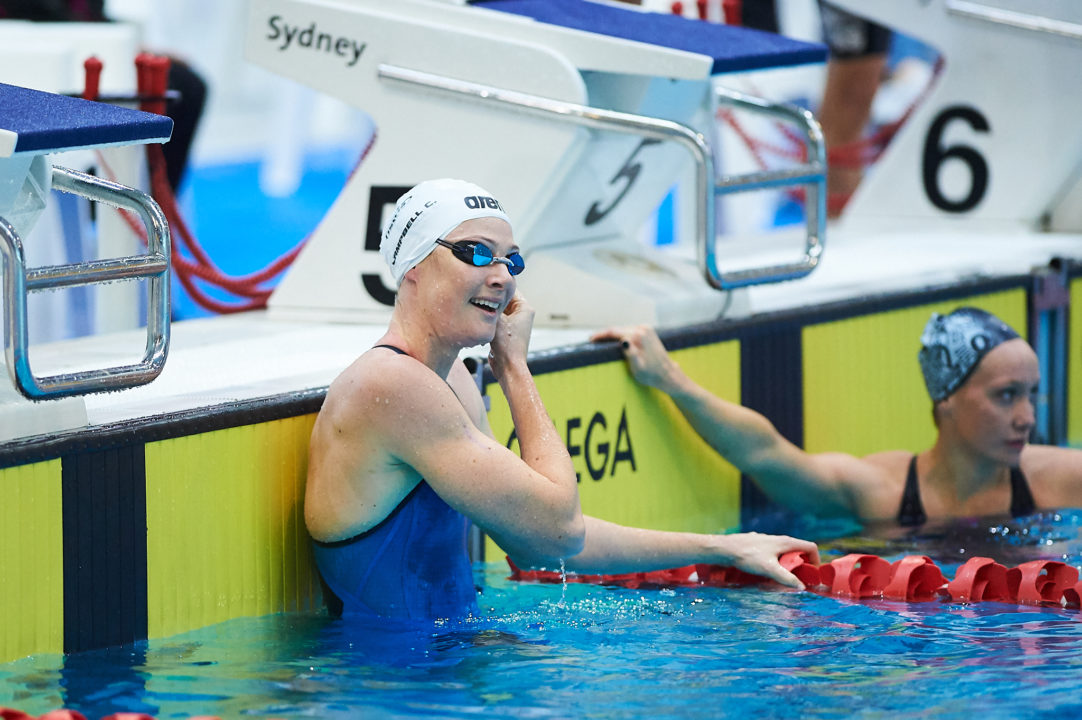 Doing what she does best, Cate Campbell threw down another impressive 100m freestyle performance on her home soil, taking her first gold of the inaugural Sydney Open Meet. Current photo via Swimming NSW

Doing what she does best, Cate Campbell threw down another impressive 100m freestyle performance on her home soil, taking her first gold of the inaugural Sydney Open Meet.

Not only is the 3-day competition new to the NSW calendar, but it incorporates the UniSport Australia Swimming Nationals. UniSport Australia is the peak governing body for university sport in Australia, representing the interests of 43 universities and over 1 million students nationally. As such, there are university student-athletes intermingled with the elite Australian Dolphins, making for a thrilling mix of amateur and pro athletes.

C1 established herself as the woman to beat with a powerful 53.92 AM swim only to drop almost a full second en route to topping the women’s 100m free podium in a menacing 52.96. Splitting 25.00/27.96, C1 threw down the only sub-53 mark of the evening, with Emma McKeon is hot pursuit with a solid swim of her own in 53.64. Marion’s Madi Wilson keeps proving her freestyle progression is no fluke, clocking 53.99 for bronze.

Campbell already sits as the #1 swimmer in the world with her big-time 52.35 mark she put up at South Aussie states last month. She remains just 1 of 4 women worldwide who have ventured under the 53 second threshold in this event this season. Both McKeon and Wilson have been slightly faster this season as well, but with the Aussie World Trials still a month away, the women have got to be happy with this kind of speed at this point.

Of her performance, C1 said, “I know I’m never going to be the fastest  starter in the field but we are working on getting it as best we can…so I will be interested to see the video of the start.

“But the time was certainly very encouraging at this stage of the preparation for next months Trials and before we head to Thredbo for our annual training camp – where we will do nothing but train, eat and sleep.”

The men’s 100m free saw an upset of sorts whereby Aussie national Cameron McEvoy, who trains at TSS Aquatics under Chris Nesbit, but is representing his Griffith Uni here, took bronze, clocking 49.48 for hs efforts. Even with Japanese National Record holder Katsumi Nakamura in the mix, it was his teammate Katsuhiro Matsumoto who came out on top.

Entering this meet with a 100m free personal best of 48.99 that rendered him 15th in this event at last year’s Pan Pacific Championships in Tokyo, Matsumoto dropped that down to 48.83 to surge to the lead and earn a new lifetime best. Splitting 23.70/25.13, Matsumoto beat out Nakamura’s still-solid 48.92. Nakamura is currently ranked 9th in the world with his season-best of 48.12 from this past January.

As with the Aussies, Japan has an additional World Championships-qualifying meet, but theirs is represented by the Japan Open Swim slated for the last weekend in May. Matsumoto has already qualified for Gwangju in the 200m free.

Of note, former national record holder Shinri Shioura raced to a time of 49.52 in this morning’s prelims but wound up scratching the final.

McKeown was already sub-2:10 this season, marked by the 2:09.47 she logged at last December’s Queensland Championships. That situated the teen as 10t hin the world  in the event, even after most nations’ World Championships Trials have concluded.

However, the younger sister of OLympic finalist Taylor McKeown put up the 3rd fastest time of her career with a monster 2:07.10 to lead the women’s 200m back field tonight by over 4 seconds. The next closest competitor was Minna Atherton, who touched in 2:11.54, followed by visiting Japanese swimmer Natsumi Sakai, who punched a time of 2:12.29.

As for her time, McKeown said post-race she was ‘super surprised.’

“The Canadians and US girls have been putting up some smart times so why not let the Australian girls do the same thing….hopefully come Trials I will get down there again,” said McKeown, who has only had a day’s rest after a heavy block of training.

“I’m pretty happy with that performance and hopefully in a month’s time I can do that again; my coach Chris Mooney didn’t talk about times just to concentrate on my technique but I only did two kicks off the walls so there is still room for improvements.”

Bond University’s Maddie Gough crushed a new personal best en route to victory in the women’s 800m free. Surging to the lead after the first 100m, Gough raced on her own to the final wall, clocking 8:26.89. That overtakes her previous personal best effort of 8:27.28 that rendered her 7th after heats of the event at last year’s Pan Pacific Championships.

With that outing Gough now ranks 8th in the world, frog-hopping Spanish Olympian Mireia Belmonte in the process.

Another PB was seen by the likes of Japanese mega-weapon Daiya Seto, who skipped his pet 200m fly event to contest an off race of the 400m free instead. Having rarely swum this mid-distance free race, the 24-year-old powered his way to an impressive new personal best, beating out Aussie stars Jack McLoughlin and Mack Horton in the process.

Stopping the clock in 3:48.19, Seto’s time marks his first adventure ever under the 3:50-threshold and gives us a good indication that he’s ready to put up some additional knockout performances at this month’s Japan Open.

For McLoughlin and Horton, who finished in respective efforts of 3:49.32 and 3:50.53, their outings are nothing more than indicative of the training they’re under in the final weeks leading up to the Aussie World Championships Trials.

Finally, Yui Ohashi nailed a stunner in the women’s 400m IM, beating the field by over 7 seconds. Earning the gold in 4:36.54, paired with her world-leading season-best time of 4:32.00, Ohashi further proves she, along with Hungary’s Katinka Hosszu is ‘the hunted’ come this summer’s World Championships.

FYI This is being streamed on UniSport’s Youtube channel.

Does anyone know what happened toe the FINA Swimming World Rankings web page? It appears to be gone.

Yozhik cyberattacked it in protest of the FINA Champions Series.

You are a brave person. I respect that. But next time be wiser with finking. 😀

Unfortunately, I don’t think so. I looked at the results, and many reaction times in various events are way too fast. It’s highly unlikely to see 0.38 RT (100 fly) without a DQ.

Would be surprised to see Horton qualify individually to be honest. Even if he did he seems to be trending in the wrong direction and getting slower so I doubt he’d final in anything

He’s not traditionally fast in season so you needn’t be so pessimistic. But I agree that he’ll face some serious challenges this year from McLaughlin and young Winnington. Missing the spots in individual events is possible.

I don’t think he gets individual 200 free qualification. I think his best shot is the 800 free.

Sjostrom in my opinion has cemented herself as the best female sprinter of all time however I feel like once Cate finally nails her taper correctly at a major meet such as worlds or olympics those freestyle WR’s will be hers. Cant wait for the showdown.

We will see this summer who is the queen of sprints so far, but Tokyo is where it counts… still don’t count out Simone she shows up when it matters.

Or maybe another unknown 16 year old girl will show up n win.

We will see maybe Gretchen Walsh

Simone got a bit lucky. Downvote away

Winning against prohibitive favorites who had one second advantage in personal best twice in a row can be looked as extreme luck. But swimming personal bests each time in these cases isn’t luck at all. Also both Sjostrom and Campbell were only twice better than 52.27 and it looks that for them it is a tough threshold. So it’d better stop talking about Simon’s luck because it has negative connotation. If she is able to swim close to her personal best then it would be no joke for anybody to race her.

some people have mind filters to watch swimming races ….thats how it is

Simone swam a smart race to be precise , no such thing as luck there .

Totally agree. If other sprinters hadn’t fallen flat they would have won. Both Campbells, Ikee, Sjostrom, Weitzeil, Kromowidojo, Oleksiak, and Blume are all faster!

I think ‘best’ and ‘greatest’ are quite different. Manuel is, as of right now, the greatest female sprinter of her generation. In regards to “best”, she is still some way behind Sjostrom & Campbell.

You must have been watching a different Pan Pacs last year…

Cate has won one individual global title (6 years ago) in an 11 year intl career. Manuel is reigning World & Olympic champ and has been around half as long. For me: Medals = greatness & times = best swimmers.

Manuel does not have hardware that match Sjostrom, and especially not if you remove relay coins that are nationality driven. Sjostrom is both the best(WRs) and greatest(hardware, longevity, consistency) for the time being. Not to mention greatness in two strokes and being a must-have-swimmer in relay prelims for her country that neither Campbell or Manuel are. When Sjostrom, Campbell and Manuel(and others like Blume) compete at the 50 free sunday of a meet, Sjostrom has swum a billion races and won a lot of individual medals already. The others haven’t and that might not be something to hold against them, but it’s still a big factor that Sjostrom has to live through at these championships. So I’d say a gold,… Read more »

I think she needs at least one freestyle gold medal for that.

Sjostrom won 100 fly though. But yes, Simone is still the top sprint freestyler at the moment

Frasers achievements in the 100m – 3 Gold Medals and World Record holder for 15 years will probably never be beaten.

Why don’t you look at prewar time. You will find even more impressive achievements. Fraser swam a half of a century ago. That time even the water was more watery. 😀