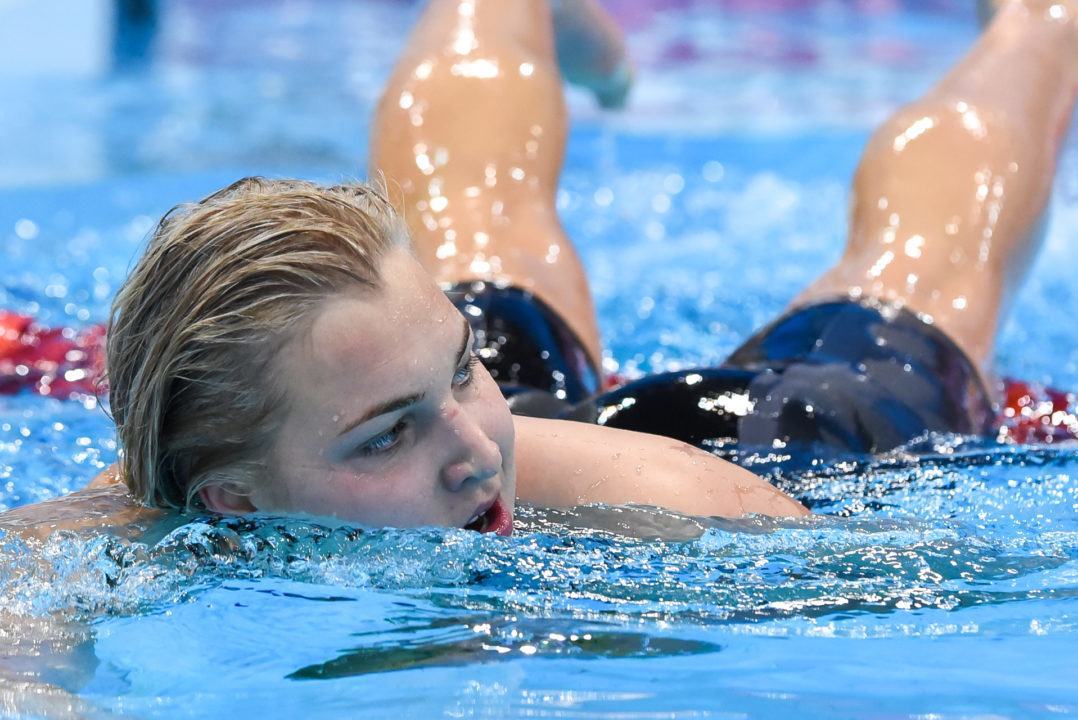 2012 Olympic Champion in the 100 meter breaststroke Ruta Meilutyte called out FINA on her Twitter account on Thursday over their... Archive photo via Peter Sukenik/www.petersukenik.com

2012 Olympic Champion in the 100 meter breaststroke Ruta Meilutyte called out FINA on her Twitter account on Thursday over their decision to not suspend Russian swimmer Yulia Efimova.

“Congratulations @fina1908 you’ve just lost the faith of thousands of swimmers and supporters,” Meilutyte said in the Tweet. She replied to her own Tweet with a “*clean swimmers” to clarify her barb.

Congratulations @fina1908 you've just lost the faith of thousands of swimmers and supporters ????

In 2012, Meilutyte, who represents Lithuania but has trained in Great Britain for most of her elite career, won the Olympic gold medal in the 100 breaststroke. Efimova placed 7th in that race.

This season, Efimova ranks 2nd behind Meilutyte in the 100 breaststroke, but she hasn’t raced since early March after being placed under a temporary suspension for a positive test for the recently-banned substance Meldonium.

FINA lifted the temporary suspension, however, and this week the FINA Doping Control Panel decided not to issue Efimova any suspension, and the Russians affirmed her spot on their 2016 Olympic Team. The positive test was Efimova’s second since the 2012 Olympics; the first, for a different substance in 2013, resulted in a 16-month suspension.

Efimova won the World Championship in the 100 breaststroke last season, while Meilutyte took silver seven-tenths of a second behind.

Surely, if Sharapova is banned for the same substance FOR 2 YEARS!! , then any other person using that should be too.
So we can’t trust FINA either.
All of these are corrupt too.

If Ruta was educated on the situation she wouldn’t make such foolish statements.

Efimova did nothing wrong. And her previous “doping” history was taking a GNC supplement. And she received a stiff punishment all for this GNC supplement.

Maybe Ruta and her moronic coach should just accept that Efimova is more talented. If a couple over the counter pills made someone a world class athlete then everyone would be.

In light of this, I might as well dope my child from an early age until they are in the 18-20 range, stop 2-3 years before an olympic games, and have them win a medal

Everybody’s so eager to jump on conclusion without looking at the facts. And the facts are: meldonium was banned without studying. WADA acknowledged there were no stydies proving improved performance and how long it takes to release meldonium from someone’s body. All they did is caught a bunch of Russian and Eastern European athletes with the amount of meldonium later acknowledged as insignificant.

Russia is not popular country right now but athletes shouldn’t suffer for politics. People who actually close to the matter realize that it’s WADA who screwed up big time banning a substance without appropriate research. FINA just follows the rules, if there are no merits to ban, a swimmer shouldn’t be banned, whether somebody likes it or… Read more »

Yeah but look at the facts 2013 the year she actually did cheat was a historic year her times were crazy fast. She cheated got caught and was let back in to the sport. What’s wrong with fina is how bad they are at catching people,and when they do they don’t ban them. They let them back In to the sport; it’s a shame to all the honest hard working people who are screwed over by doping athletes who are allowed to compete ( park tae hwan… Majority Chinese swimmers, efimova). Don’t let those names get you thinking other countries don’t dope I’m sure America Australia etc has dopers that don’t get caught!

What are you talking about? Maximum ban for the first offense is 2 years in every sport, swimming is not an exception. Why swimmers should be banned forever? And btw, it’s not FINA, it’s WADA who’s responsible for doping tests.

People had faith in FINA?