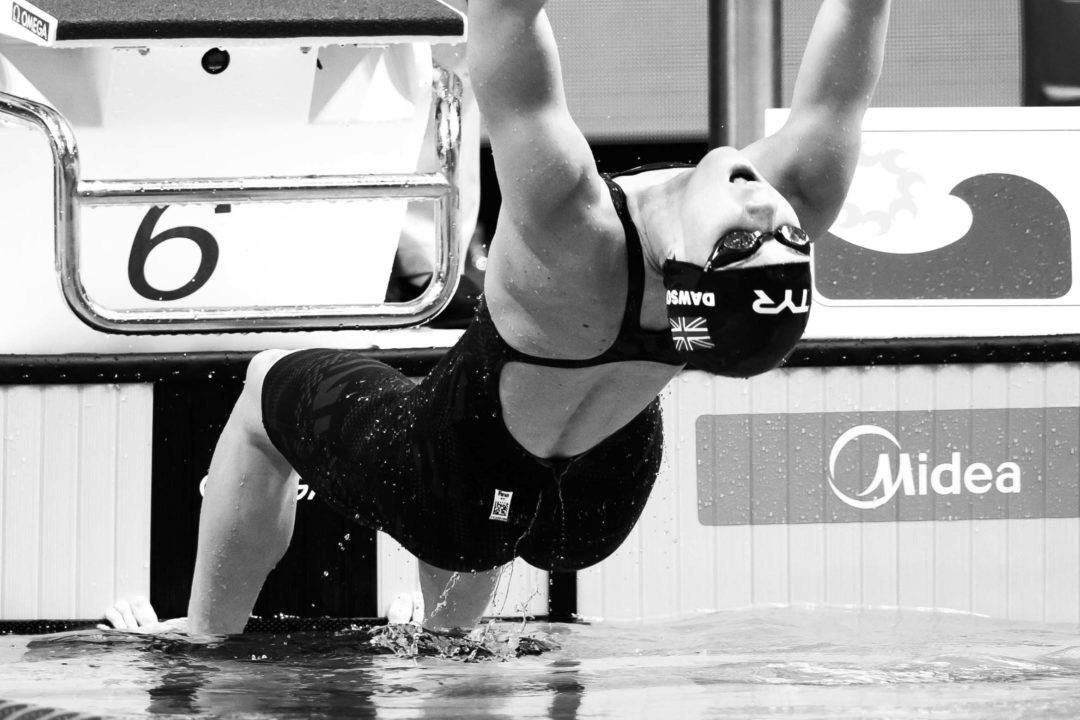 Kathleen Dawson thrived under the pressure of having to race the 100 back final a second time, reaffirming her gold medal victory in a time of 58.49. Archive photo via Mike Lewis/Ola Vista Photography

Due to a timing error, the women’s 100 backstroke final at the 2021 European Championships had to be re-swum on Friday night, taking place approximately 45 minutes after the scheduled session had wrapped up.

In the original final, which happened relatively early in the session, Great Britain’s Kathleen Dawson dominated the field en route to a decisive victory, breaking the European Championship Record in a personal best time of 58.18.

Kira Toussaint of the Netherlands won silver in 59.02, and Russia’s Maria Kameneva was the bronze medalist in 59.13.

However, due to the malfunction, it was announced that the event would be re-swum and that all of the times established in the initial heat would not count. That took away Dawson’s meet record, though she still held it with her 58.44 from the semi-finals.

The swimmer most obviously impacted by the starting error was Sweden’s Louise Hansson, who clearly missed the start and ended up swimming a time over two seconds slower than she had in the semi-finals (1:02.29 to 1:00.04).

Below, you can find the results of the initial final. Credit to Steve Buckley/@pullbuoy for providing us with full results of the race, which have since been deleted.

In the re-swim, Dawson got the job done again, this time in 58.49. Though she loses her official PB of 58.18 and that Championship Record, she still owns the record and keeps her European gold medal.

Italian Margherita Panziera was the biggest benefactor of the re-swim, dropping over six tenths from the first heat to move up from fourth to the silver medal in 59.01, .09 off her Italian Record.

A 200 back specialist, Panziera’s endurance likely played a factor in her swimming so strong in a back-to-back scenario.

On the other end of the spectrum was Toussaint, who goes from winning the silver to finishing outside the medals in fourth, adding three tenths from earlier in the session in 59.32. Russia’s Kameneva added just under a tenth and kept the bronze medal in 59.22.

Maaike de Waard, who had also reportedly not heard the start in the first race but was clearly not as hindered as Hansson, added three tenths and fell to eighth in 1:00.64.

The podium ended up consisting of the same three countries as in 2018, when Fesikova won gold for Russia, Georgia Davies won silver for GBR and Carlotta Zofkova was the bronze medalist for Italy.

This was also Dawson’s second medal in the event after winning bronze in 2016.

While a re-swim of this magnitude hasn’t happened in recent memory, there have been some individual time trials offered to swimmers at major meets for various starting malfunctions, and it seems to always be backstroke.

At the 2019 World Championships, issues with the starting ledges resulted in multiple re-swims in the men’s 100 backstroke, including Italian Simone Sabbioni having a second issue during his re-swim. Dylan Carter also got a re-swim, and with both men going fast enough to qualify for the next round initially, FINA ended up allowing 18 swimmers to race the semi-finals.

At the 2019 NCAA Men’s Championships, Cal’s Daniel Carr was awarded a re-swim in the 100 back after the officials failed to remove the wedge from his lane for his turn at the 50. Carr ended up swimming a lifetime best in the re-swim and qualifying for the final.

There was also an issue at the 2019 CCSA Championships, where four 50 free heats had to be re-swum due to a timing malfunction.

The original swim wasn’t fair due to a starting malfunction with Hansson, and her doing a re swim by herself is still unfair cause it’s a final, you race each other for medals!! So they reswam it. It also didn’t just affect Hansson, Hansson said that at the end of the race all the girls were asking “what just happened?/what was that?” Toussaint even said that she had to look during her streamline. It is likely that when the Swedish team protested, some other federations agreed, especially if De Waard struggled too, You also all argue that “Hansson reacted” but you can hear in the video that the beep was unusual and therefore her not reacting is warranted. Brodie Williams… Read more »

Well that solves it, Hansson clearly heard the start.

Oh boy, I don’t think anyone has ever been hit as hard by the Cover Photo Curse as Toussaint was today.

I can understand reswimming the final for the sake of official placement, but I don’t understand the rationale for negating the times from the original final. Is there any reason to believe Dawson’s 58.18 wasn’t legit?

Likely the officials chose the route of repeating the event as it was a finals situation and simply offering a time trial to the displaced swimmer still puts her at a disadvantage by swimming solo.

That’s got nothing to do with my point, which is that the 58.18 should still count as an official swim, a PB, and meet record.

Agree with this. Regardless of the rights and wrongs of the decision to Re-swim*, I don’t understand why times from the original final should be voided. Imagine if a swimmer had hit an A or B Fina time, then missed it in the re-run… Dawson will get one last crack in the medley relay mind.

*I think this is a case where there’s no universally “right” decision: all possible outcomes carry a measure of unfairness. But really feel for Toussaint at the end.

If you hear a sound but you dont go, its your own fault, right? Hansson clearly heard something, because she reacted, but than held back. Someone lost a silver medal because a girl afraid to start a race wanted to be 6th very bad.

what if your individual speaker (each block has their own speaker so sound can travel the same distance from speaker to swimmer) malfunctioned?

I agree she should still race if there was a malfunction but if her speaker was out that’s an unfair advantage to the other 7. At the very least they should have allowed her to time trial the race but I imagine they chose to re-race the event because they would of had a bigger issue if by the odd chance she put up a podium time on her own. I side with the swimmers generally until there is more clarity on the actual issue.

The protest is a measure available to everyone and I would imagine every swimmer or federation would protest as a matter of process. she doesn’t have to apologise for fighting for the opportunities afforded her.

In the original video Hansson clearly reacted to the starter, but just didn’t go. How can you react to the starter yet claim to not hear it? Hardly constitutes a re-swim in my opinion.

Well, to play devil’s advocate, I suppose you could think you heard something, and react instinctively, but have doubt in your mind that it was actually the starting horn. And then, part of you might not want to do a flat-out 100 back if you think it’s going to be restarted two minutes later.

In the Swedish interview she said she heard multiple sounds which would indicate that something was wrong and she thought they were going to call it back. Then she saw everyone else had already started so she reacted instinctively and tried to swim anyway but through the race she thought they were going to be stopped to restart the whole procedure.

Ya, and all other 7 swimmers had no problem. I don’t know, she wasn’t in medal contention and I think she should’ve just kept it moving and focused on the next race. Very unfortunate for Touissaint.