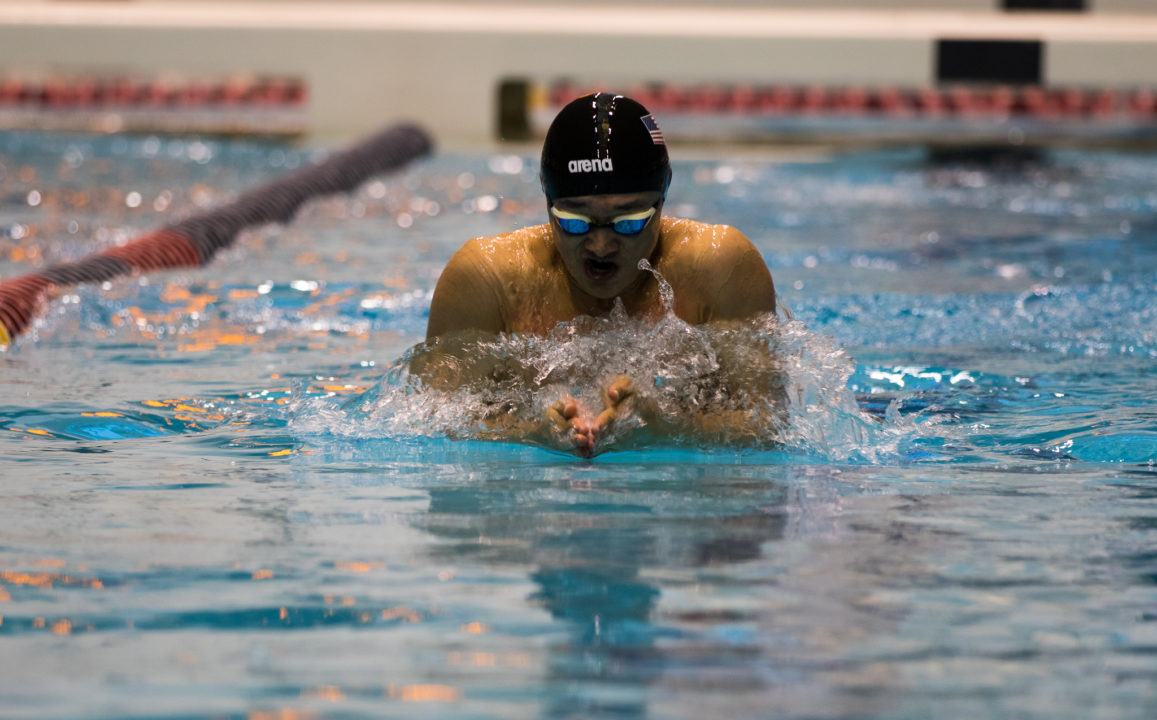 The 2018 Pacific Northwest Swimming Sectional Championships didn’t start the way most do, with a partial, distance-and-relay day, but instead jumped in full-bore with 12 events on Thursday in Federal Way. Montanan Katharine Berkoff and Oregonian Ethan Heasley won a pair of events on the opening day, while the home team from KING and the visitors from Fort Collins, Colorado duked it out in the team battles.

On the men’s side, Ethan Heasley’s first win of the session came in the boys’ 1000 free, where he swam an 8:59.64 to break the old Meet Record done by Yoelvis Pedraza in 2015. He becomes the 17th swimmer aged 16 & under to go sub-9 minutes in this event – including 12 done this decade. That marks the beginning of a recovery in American men’s distance swimming; 5 swimmers in this age group went sub-9 minutes in the 1980s, and then none did it for 20 years, until 2010 when Danny Thomson and Arthur Frayler both did it.

He was one of two male swimmers to break individual Meet Records: Daniel Roy of the local King Aquatic Club took out the 200 breaststroke in 1:51.69. That broke his own record of 1:53.55 done in prelims, and ranks him as the 3rd-fastest junior in U.S. history in the event. The top 5 swimmers in 17-18 history in the event all swam or will swim in the Pac-12, including Roy at Stanford next season. Whitley, Seliskar, and Koon are all Cal Bears, while Cordes swam at Arizona.

The day’s lone female Meet Record was broken by Zoe Bartel from the Fort Collins Area Swim team in the 200 breaststroke, where she swam a 2:06.24. That broke the 11-year old Meet Record of 2:07.80 set by Olympic gold medalist Megan Jendrick in 2007. That time knocked a full second from Bartel’s previous best. The 17-year old Stanford commit will help fill the Cardinal’s current breaststroke hole: she was already faster than Stanford’s top time this season in the 100 breaststroke, and now is faster than Stanford’s best time this season in the 200. 2:06.24 is already a top-5-at-NCAAs caliber time in the 200.

In the 100 free, former Cal bear ‘Aukai Lileikis won in 42.72, which is a new lifetime best for the former member of the US Junior National Team from Hawaii. 16-year old Tualatin Hills swimmer Caspar Corbeau finishing 2nd in 43.78.

Reece is like a foot taller than Roy. Its incredible that they are on the same level

I also have a photo of Zoe Bartel’s swim (not quite as good as Roy’s).

The meet results online show it tied – if you have different records can you share a link? Or email to share@SwimSwam.com if it’s a photo of the heat sheet or something.

Shout out to CAAT (Cenral Area AquaticsTeam) located in Seattle and Mt. Hood Aquatics who are the Co Hosts of this Sectional meet! Not KING Aquatics. Thanks CAAT and Mt Hood!!!

KIng Aquatics rents the KING COUNTY AQUATIC CENTER just the same as other teams in the Seattle area. KCAC is no a KINg aquatic club exclusive pool!

How about focusing on the quality swimming happening at the meet rather than the author’s oversight.

How about giving Credit to the clubs who are working their butts off hosting this meet!
That doesn’t take away from the fabulous swims of these swimmers! No doubt they are rocking it in the pool!

Thanks PNS Parent for the shout out but you forgot to give credit to King Aquatic Club, who graciously shared the expertise of running hospitality of big meets as well as hospitality equipment in order to run the meet successfully. It has never been just one exclusive team like you mentioned, it’s always the swimming community helping each other out when needed.