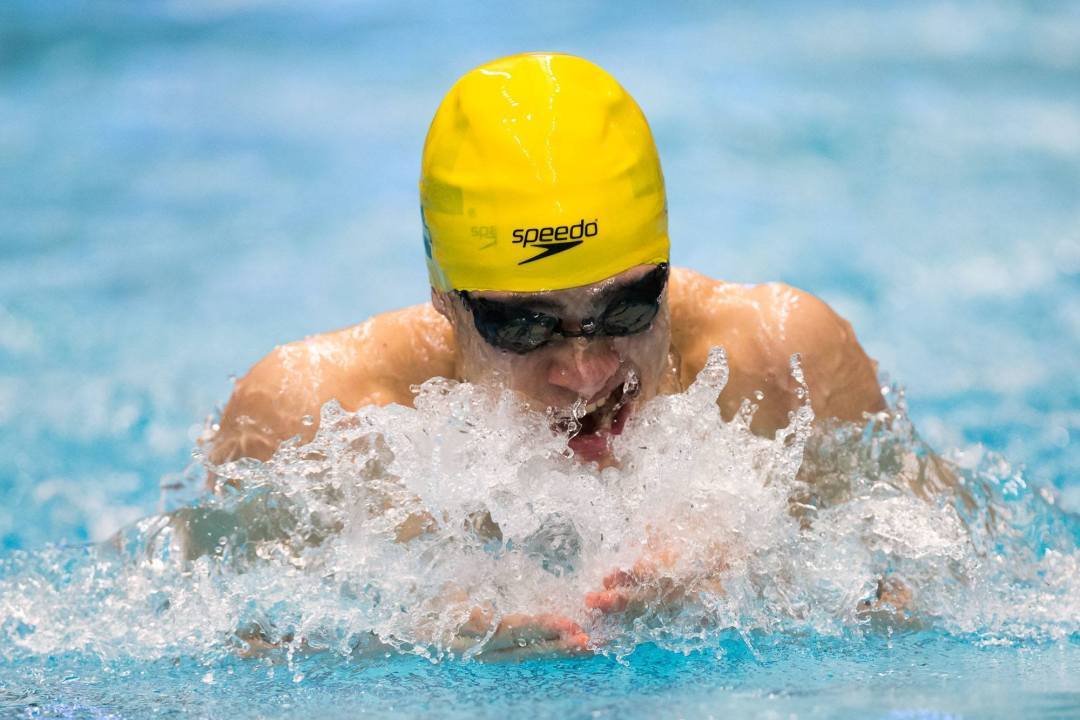 Richard Funk and the Michigan Wolverines impressed at home in a quad meet last weekend and earned themselves a #1 ranking from the CSCAA. Archive photo via Tim Binning/TheSwimPictures.com

Editor’s Note: SwimSwam does not participate in the voting for the CSCAA Poll. Our first Power Rankings of the 2014-2015 season will be released next week.

The Collegiate Swimming Coaches Association of America (CSCAA) has unveiled their first men’s rankings of the 2014-2015 season. The Michigan Wolverines, who won the huge quad meet with Texas, Indiana, and Louisville despite DQ’ing their A 400 medley relay, are ranked 1st in the initial poll. They started the year in the same spot last season before finishing 4th at NCAA’s at year’s end. Meanwhile, the Texas Longhorns start this season in the same spot they finished last season: no. 2.

The defending champions from Cal are ranked 6th, but there won’t be much panic in Berkeley as the Golden Bears have yet to race a serious opponent. Their first big challenge will be against Stanford on November 5th, and that will follow with a dual against Wisconsin two days later. For reference, Cal started last season ranked number 3.

About: The College Swimming Coaches Association of America (CSCAA) Division I Team Rankings are compiled by nine CSCAA-member coaches and one media member.   The rankings will be released on a weekly basis throughout the 2014-15 season, alternating weeks between a men’s and women’s team ranking.

Methodology: The CSCAA DI Poll Committee will produce in-season rankings of the 25 best performing NCAA Division I Swimming and Diving teams in rank order at the time of each poll.  The poll is not designed to predict the results of the NCAA Championship, but rather which teams would win head-to-head against other teams in the country. Ranking are based on performances that have taken place since the previous poll and include invites as well as dual meets.  The committee does not consider teams that have yet to post official times in the current college season for the first poll.

CSCAA NCAA Division I Men’s Swimming and Diving Ranking as of October 30, 2014

I understand they use dual meet results instead of eye test and returning points from last year NCAAS. CAL is still #1 and their recruiting classes just keep getting stronger and stronger. Texas is right where they should be for now. Did you see the Women’s poll last week? They didn’t even have Texas in the top 25??? I know the women have not been as good as the men for a long time but they are still top 10 top 12 at worst. Their assistant coach is on the voting panel? What happened there? I guess because they had not had an official dual meet yet?

Although it’s early, most teams seem to be in the top 25 that should be, although I think once Virginia is free of suspensions and Utah gets rolling they are both capable of top 20 finishes.

I would think Georgia will fall out of top 5 rankings, but should remain top 10. Other than that the top 5 is pretty accurate thus far except obviously for Cal not being the top team yet since tough schedule hasn’t begun