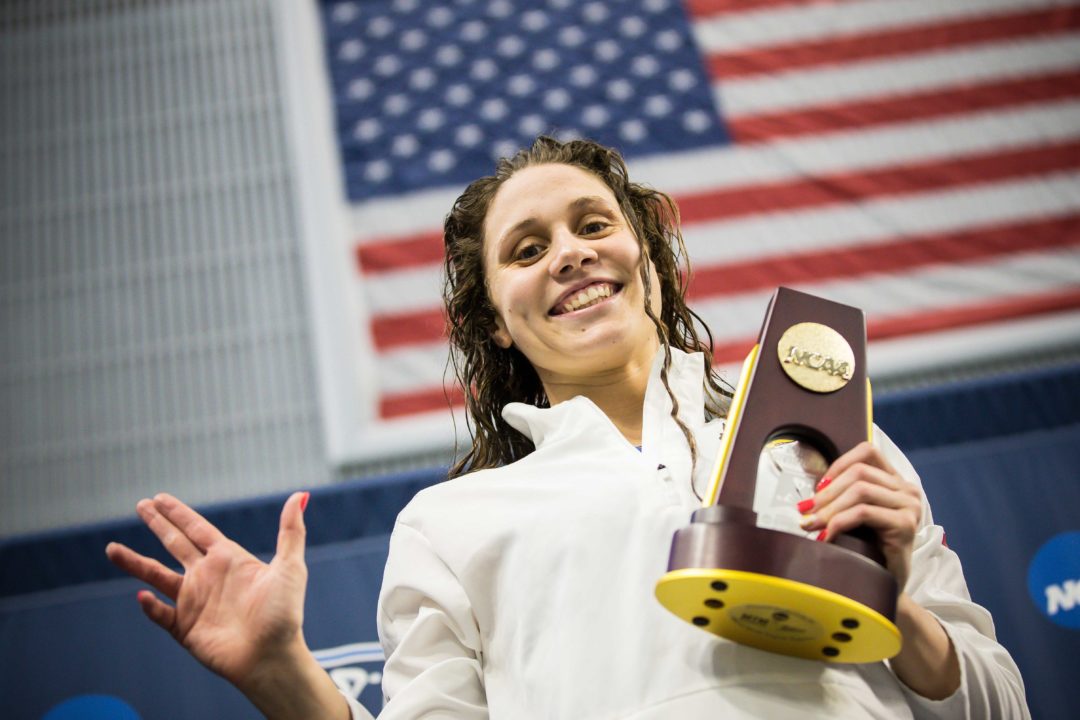 The Indianapolis site appears to be the biggest of all of the sites, with a large number of Olympians and National Team athletes slated to appear. Archive photo via Jack Spitser/Spitser Photography

The Indianapolis site appears to be the biggest of all of the sites, with a large number of Olympians, National Team athletes, and age-group standouts slated to make an appearance.

Unlike several of the other sites, the Indy psych sheets are not dominated by one college program or pro group. However, the meet will still feature the several notable teams, including Indiana Swim Club, the University of Michigan, and Cardinal Aquatics.

The contingent from Cardinal Aquatics and the University of Louisville includes many notable names, such as US National Teamers Mallory Comerford and Nicolas Albiero.

Louisville swimmer and US National Team member Nicholas Albiero, is seeded 3rd overall in the 200 butterfly. At the 2020 ACC Championships, Albiero became the 4th fastest performer all-time in the yards version of the event, putting up a time of 1:38.65. If Albiero can translate that performance into meters, he will definitely be a threat. Albiero is also slated to swim the 100 butterfly, 50 freestyle, and the 100 backstroke, with his highest seed being 3rd overall in the 100 backstroke.

Several members of the Indiana University team and pro group are also slated to make an appearance at the meet, including Olympic gold medalist Cody Miller and  National Jr. Teamer Emily Weiss.

Miller holds the top seed in both the 100 and 200 breaststroke. The reigning Olympic bronze medalist is electing to stay close to home for the meet, as Miller and his wife Ali are expecting their first child together in the next few weeks. Miller trains out Indiana with Ray Looze, but he is entered in the meet representing the Sandpipers of Nevada, his club team.

Weiss, the 2018 Jr. Pan Pacific Champion in the 100 breaststroke, holds the top seed in both women’s breaststroke events. In the 100, the 19 year-old is seeded almost a second ahead of second-seeded Elizabeth Andrews.

The biggest name competing at the meet is arguably former world record holder Kathleen Baker. Prior to Regan Smith’s record-smashing performance at the 2019 World Championships, Baker held the world record in the 100 backstroke with a time of 58.00. However, at those same World Championships, an injury-plagued Baker failed to medal individually. Baker has already swam in a meet post-quarantine, appearing at Team Elite’s San Diego Invitational, where she posted some solid times.

At this meet, Baker is slated to swim both backstroke events, along with the 200 IM. She holds the top seed in all three events by multiple seconds. With Smith and Phoebe Bacon both competing at the Des Moines meet, Baker will have to compete for the title virtually.

Joining Baker at the meet will be her Team Elite teammate Gabby DeLoof, who is representing Club Wolverine. The former Michigan Wolverine is a silver medalist from the 2019 World Championships and a multi-time World University Games gold medalist. DeLoof holds the top seed in the 200 freestyle, and the second seed in the 100 freestyle behind Comerford.

Fellow Big Ten alumnus Ally McHugh is also entered in multiple events, holding the 2nd seed in the 400 freestyle, along with the top seeds in the 400 IM, 800 freestyle, and 1500 freestyle. McHugh swam collegiately at Penn State and now trains as a post-grad at Wisconsin