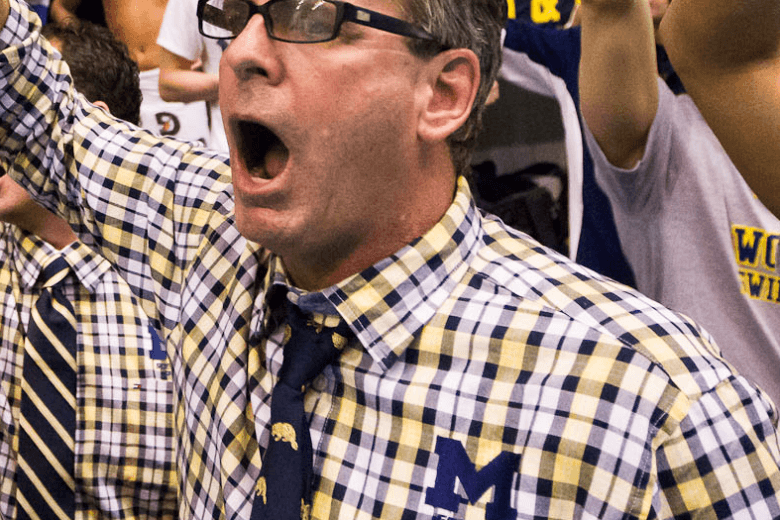 With the B1G Women’s Championship beginning today and the men’s meet quickly approaching, Michigan head coach Mike Bottom and Indiana head coach Ray Looze will likely be in the center of attention.

According to the FINIS Swimulator rankings, Michigan is slotted to out-score Indiana by a small margin (enough to be about a dead-heat) at the meet.

Looze said he is excited for the upcoming championship season with NCAAs looming on the horizon. But the head coach has his priorities set before the biggest meet of the year in Austin, Texas occurs.

“I think we have a deeper swim team than we had last year,” Looze said. “We just got to get through our conference meet first because Michigan is a hell of a team. They’re kind of our first concern and to end up getting the people we need through to NCAAs.”

Looze highlighted a few swimmers on the women’s side that he is looking forward to watching in Bloomington throughout this week, listing Noelle Peplowski, Laura Morley, Cassy Jernberg and Bailey Andison as athletes to watch. And of course, there’s Lilly King.

“Bailey Andison, I would love for her to be the first IU women to break four minutes,” Looze said. “That’s something she put down as a goal in the 400 IM, the transfer we have. There’s a few people trying to do some special stuff that I’m really looking forward to watching.”

Looze feels that his women’s team, which he believes has vastly improved and is a deeper team in general from past teams, is primed for the types of meet that lie ahead in the coming weeks with multiple swims over many days.

“We haven’t been that great of a dual meet team but I think we’re going to be a hell of a invitational type team, so like the Big 10 conference, NCAA,” Looze said. “We kind of have a little bit more in certain areas that doesn’t get to be fully utilized. For example, we have a lot of 200 breaststrokers and they can’t all swim at a dual meet but at an invitational type setting they can.”

Looze said he also thinks his men’s team can contend for a national title behind swimmers like Zach Apple, Vini Lanza and Ian Finnerty.

When Michigan and Indiana face off on the men’s side, it could serve as a bit of a national title preview as both teams have been ranked in the top five of the TYR/CSCAA Top 25 poll throughout the season.

Preparation for this conference meet is done differently by each of these squads but with the same goal in mind of saving enough energy for NCAAs. Bottom said that for Michigan, his assistant coaches will taper certain individuals who he believes have already qualified for NCAAs as opposed to tapering the whole team.

“We want to perform our best at NCAAs,” Bottom said. “It’s important for those guys that have already made it to be individualized so that they can get enough rest to swim fast enough here, but not have this as their best of the season meet.”

Looze said he likes to stick to the same training cycle he has his swimmers go through during the entirety of the year, but just to do a bit less of it leading up to conference championships.

“We’re more of an NCAA oriented team so if we have anybody that’s already qualified for NCAA, they won’t fully rest, and sometimes they won’t shave for the conference meet whereas I’m sure the majority of teams shave and rest for the conference meet,” Looze said. “We don’t necessarily [do that]. So like Lilly will be unshaved and with very little rest. It’s tough to reload that quickly to turn it around. I think those conference meets are pretty taxing.”

Both coaches shared some of the strategy behind picking relay teams for these high-stakes meets. Picking the swimmers this year is more straightforward except for a few situations for Indiana according to Looze. Determining the order of who swims when is key for Indiana.

Bottom said Michigan will make the decision on who swims on a relay based on a number of factors such as how swimmers do in individual events and how many times they might have swam before a relay.

“That is a tough decision because you never want to make a decision that will affect a person’s psyche,” Bottom said. “On the other hand, you want to pick the best team to get up there and compete.”

Title makes it seem like they’re going to race… 100 IM?

If the teams tie, this should be the tie breaker.