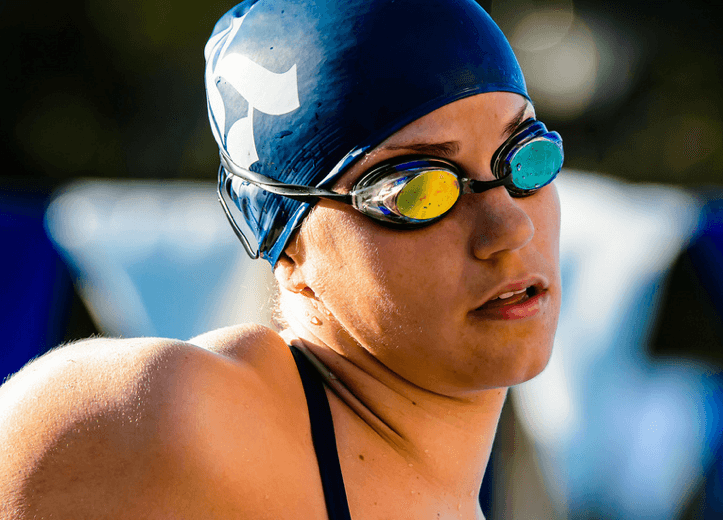 Casey Clark and the Rice University Owls led start to finish at the three-day Phill Hansel Invitational to deliver the... Archive photo via James Hilton

Casey Clark and the Rice University Owls led start to finish at the three-day Phill Hansel Invitational to deliver the team win on Sunday night over Tulane University, University of North Texas and the host University of Houston Cougars at the Recreation Center in Pearland, TX.

On Sunday night, Clark set her fifth school record of her collegiate career by erasing Mandy Mularz‘s 12-year-old Rice record in the 100-yard free with a 49.26 by leading the entire race with splits of 23.71 and 25.55 over Tulane’s Mia Schachter, who nearly missed breaking 50 seconds with a 50.03 result. Schachter tried, though, as she went out in 23.77 right along side Clark. Both women separated themselves from the field, as third-place finisher and North Texas freshman and Canadian Isabelle Morris (51.12), who finished second in the 200-yard free, was more than a second behind Schachter for third.

On Saturday evening, Clark, who barely made the 100-yard back B Final with a 15th qualifying time of 58.00, set her first school record of the meet with a 54.45. She nearly took it earlier in the meet with her lead-off leg (54.56) for Rice’s winning’s 400-yard medley relay, but missed Shelly Patton’s mark by 0.01 seconds. If Clark hadn’t miscalculated when to turn on her jets during Saturday morning’s prelim and qualified for the evening’s A Final, her new record time would have won it. However, Mona Groteguth of North Texas, who clocked a 55.22 to win, would have given her a race as she has gone 54.59 this season.

In total, Clark went away with two school records, five individual wins with NCAA ‘B’ cuts to compliment all of them, plus another one for her 100-yard back record performance. She was also part of Rice’s dominance in the relays, as the Owls won all five of them.

Tulane’s Mia Schachter, who won the 50-yard free (22.90), provided a character moment after missing her personal best by 0.01 in the 100-yard free, where she placed second to Rice’s Clark. On the final night of competition, the Arroyo Grande, Calif. native broke the 50-second barrier and set a school record with her 49.85 100-yard free leadoff split in the 400-yard free relay, leading her freshmen teammates to a second place finish (3:23.93).

Head coach Katie Robinson saw it coming. ”She came up to me after her individual event at night and said to put her as the leadoff on the relay because she was going to get the 49,” said Robinson in a story posted to Tulane’s website. “It was a moment where you could see her ferocity and determination bright as day. I love moments like that. With her leading the way and three freshmen to follow, that relay was an extremely thrilling race to watch.”

In the pool, the Cougars had several top-ten finishes and great races from Dora Bednjanec, Taylor Derevyanik, Cameron Balkom, Jasmine Williams and Rachel Hobbins among others.

“We were better each evening throughout the meet and stuck to the plan of being assertive and supporting one another really well,” said head coach Rich Murphy in a story on the Cougar’s website. “The approach is simple in design and complex to execute. It paid off in increasingly larger dividends as the meet progressed, and the girls raced for one another.”

The annual three-day invitational is named after the University of Houston’s swimming and diving head coach, Phill Hansel, who led the Cougars from 1975 to 1996 to 70 dual-meet victories. Hansel, a 1949 graduate of Purdue, was named the Southwest Conference Coach of the Year three times during his tenure. He coached 31 swimmers to All-America honors, including Diane Johannigman, the first NCAA swimming national champion in school history.
Hansel also served as the manager of the 1992 U.S. Olympics teams and worked with the Singapore teams at the 1984 and 1988 Olympics.

Mona Groteguth is at North Texas, not Tulane.