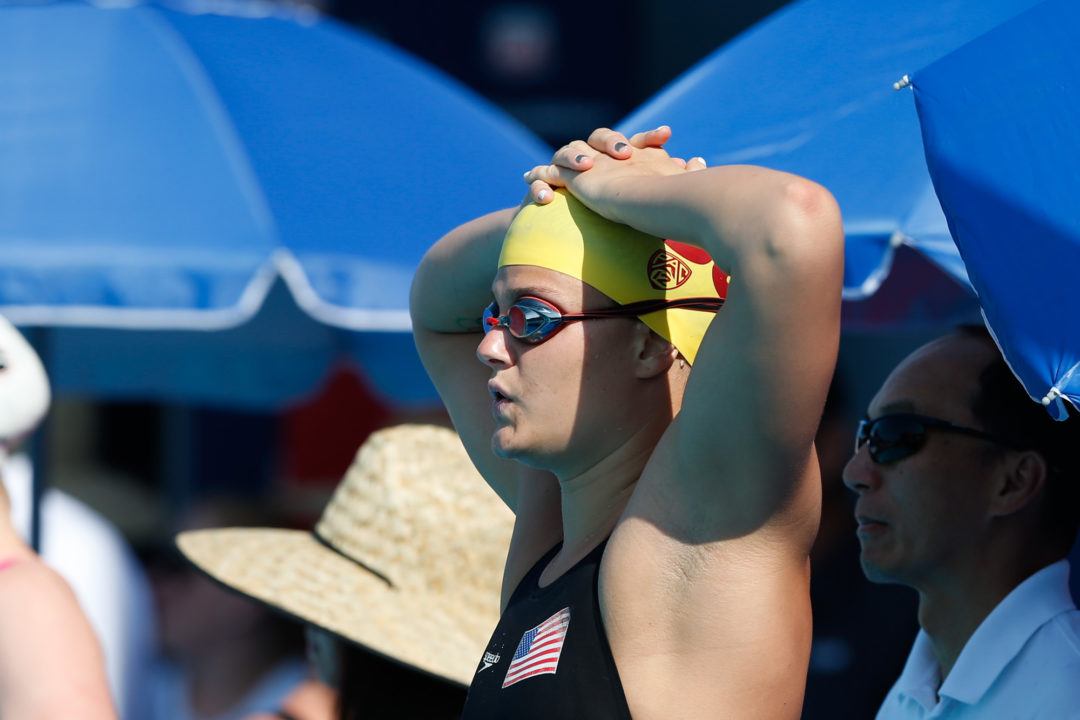 The Arizona women rolled, while the Arizona State men won a close battle on Saturday, but all 4 squads had noteworthy times to close their regular seasons. Archive photo via Tim Binning/TheSwimPictures.com

There were fast times, and even career bests, all around the meet, especially from both teams’ distance crews. Most swimmers appeared to be suited for the event.

Arizona State junior Cierra Runge started her collegiate record in record-breaking fashion at Cal in the 2014-2015 season. After spending the 2016-2017 year at Wisconsin, Runge has returned to the Pac-12 to train with her childhood coach Bob Bowman and has brought her career full-circle: once again out west tearing up the Pac-12 and breaking records.

On Saturday, she swam a 1:44.04 in the 200 free, which broke Arizona State’s 7-year old school record in the event, previously having belonged to Shannon Landgrebe.

In the 1000 free, which Runge is one of the fastest swimmers in history in, her teammate Emma Nordin finished in 9:40.71. That’s almost 3 seconds faster than the 2012 record set by former open water National Teamer Tristin Baxter in 2012 and Nordin’s personal best by nearly 30 seconds.

A sign of the day in the women’s meet though came when she swam that school record and still lost by 4 seconds. Arizona’s Hannah Cox touched in 9:36.68 to take the win in that event. That’s her season best, though 4 seconds shy of her lifetime best.

Joining her in season-best swims for the Wildcats were freshman Aria Bernal, who won the 100 back in 52.40 (an NCAA invite took 52.54 last season); and Mallory Korenwinder swam a season best to win the 100 breaststroke in 1:00.25.

Like the women, the Arizona men won the first two events of the day; but unlike the Arizona women, the men couldn’t hold on to that momentum. A 1:34.86 200 free from Grant House broke the early Arizona streak, followed by a 46.82 win in the 100 back from Zachary Poti. The Sun Devils showed big depth in both of those events, finishing 1-3-4 in each (worthy of 9 point scoring margins in each).

The Arizona men got their fair share of punches in, though, and had some big confidence-boosting swims in the meet. In the 1000 free, Brooks Fail won in 8:55.00 (16 seconds better than the runner-up Ben Olszewski of Arizona State). Fail’s previous lifetime best was a 9:01.94, done in 2017 when he was still in high school.

That swim continues Fail’s breakout sophomore season, springboarding off a 4:14 time trial at Pac-12s that qualified him for the NCAA Championships. That swim came after being left off Arizona’s scoring roster at the meet while battling an undisclosed illness.

Both teams are now done racing until the Pac-12 Championships, which start on February 27th for women and March 6th for men.

The day began with a Facility Dedication for the renovated pool, followed by honoring our seniors.

Brooks Fail won the 1000 free with 8:55.00, setting a personal-best and fifth-fastest in school history.

Sam Iida set a personal best in the win in the 200 breast with 1:54.58. The sophomore earned an NCAA B cut and moves up to sixth-fastest in school history.

David Schlicht placed second in the 200 breast with 1:56.99. The Australian won the 200 IM with 1:46.16. The freshman transfer competed in both events for the first time this season.

Arizona started the meet with a bang, winning the first four events. The women’s 200 medley relay, consisting of Bernal, Madison Blakesley, Mackenzie Rumrill, and Katrina Konopka, earned gold with 1:37.57. The LadyCat B team placed runner-up with 1:39.29.

Konopka picked up her second win of the day in the 100 free with 49.01. Taylor Nations finished right behind her with 49.77.

Up Next: The Cats head to Pac-12 Championships in Federal Way, Washington. Women’s swim and men’s and women’s diving will compete Feb. 27-March 3 and the men March 6-9.

TUCSON, Ariz. – In their final regular season meet, the Sun Devil women’s swimming and diving squad fell to the No. 21 Arizona Wildcats, 180.5-119.5, on Saturday afternoon at the Hillenbrand Aquatic Center.

The Sun Devils were highlighted by Emma Nordin and Cierra Runge, who both broke school records in back-to-back events in Tucson. Nordin stepped to the block in the third event of the afternoon, the 1000 free, and touched the wall at 9:40.71, almost three seconds faster than Tristin Baxter’s record set in 2012. The mark was a personal best by nearly 30 seconds for Nordin, which she set last January at Cal.

Runge did the same in the very next event, downing Shannon Landgrebe‘s seven-year old record in the 200 free with a time of 1:40.04, also a personal best.

Freshman Ruby Martin also contributed a top time in the 200 fly, as her time of 1:58.09 is the fifth-fastest time in ASU history. Fanny Teijonsalo rounded out the top times, contributing the No. 8 time in school history in the 100 fly at 54.05.

ASU notched five wins in the outing in the 200 free (Cierra Runge), one meter springboard (Ashley McCool), 200 back (Chloe Isleta), 200 breast (Silja Kansakoski) and 500 free (Runge). The Sun Devils also notched 20 podium finishes, including a sweep of the top-three spots in the 200 breast by Kansakoski, Marlies Ross and Nora Deleske.

The Sun Devils got off to a slow start, taking third and fourth in the opening 200 medley relay. Nordin took the block in the 1000 free, racing to a second place finish. She was followed by Kendall Dawson in fourth, Caitlyn Wilson in fifth and Bentley Hulshof rounded out the Sun Devils in sixth.

Cierra Runge took top honors in the 200 free with a personal best of 1:44.04, and ASU slowly began to build traction. Chloe Isleta took second in the 100 back followed by Silja Kansakoski and Lana Berry taking second and third, respectively, in the 100 breast. Freshman Ruby Martin contributed a podium finish as well, taking third in the 200 fly.

Diver Ashley McCool won her third three-meter springboard title on the season in the meet, putting up a score of 344.63 to take first place. Fellow Sun Devil Frida Kaellgren also place third in the event with a score of 312.00.

At the first break, the Wildcats held a 86-45 advantage over the Sun Devils.

Camryn Curry placed third in the 100 free and Isleta took gold in the 200 back to start a little hot streak for ASU, as the women went on to sweep the top three spots in the 200 breast. Kansakoski, Marlies Ross and Nora Deleske swept first, second and third, respectively, and Runge followed with her second win of the competition in the 500 free shortly thereafter.

ASU added another more second place finish through Fanny Teijonsalo, who earned that spot in the 100 fly. Just as swimming headed into their second break, McCool competed to a second place finish in the one meter springboard and Kaellgren placed third.

Ross opened the final stretch of events with silver in the 200 IM, and the Sun Devils headed into their final event of the day, the 400 free relay. The ASU A squad of Curry, Teijonsalo, Rune and Ross touched the wall at 3:20.24 for second place while the B squad of Nordin, Berry, Dawson and Erica Laning placed fourth to bring the score to its final of 180.5-119.5.

With the regular season coming to a close today, the Sun Devils turn their attention toward the postseason. Next up for the Sun Devils is the Pac-12 Championships in Federal Way, Washington.

Nice swims for Cierra for a training suit! Last year ASU men KILLED Arizona. Is Arizona that much better or ASU not as good or just different preparations. Both teams need to show up at the big dance this year!

Thanks! I didn’t read that long article. Sorry! I went right to the results. Now my perspective on times have changed

This just in, she signed with Indiana after the meet.

I know I’m ban from here because of saying that there are not enough indoor pools, but I just read an article about Fail in the Daily Star.

I read the headline that she “Fail-swam” a record. Like, she accidentally swam a 100 fly instead of a 100 back but it was a record in fly.

I am very smart.