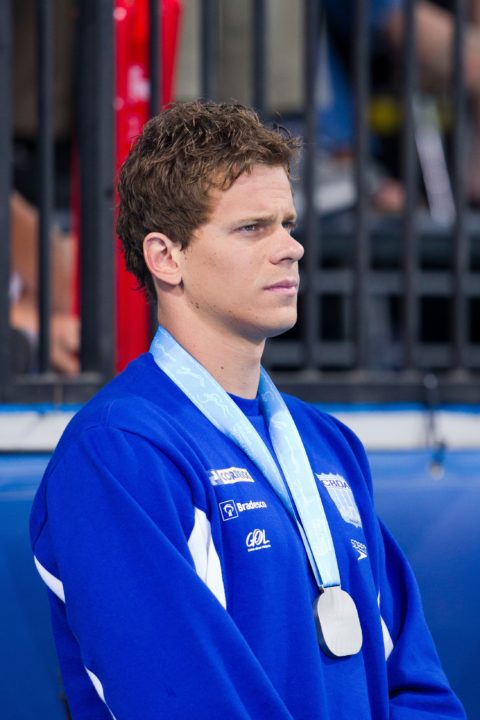 Cesar Cielo made his 2013 Maria Lenk individual debut with a 50 free that ranks him 2nd in the world. (Photo: Tim Binning/TheSwimPictures.com)

Finally, some excitement at the 2013 Maria Lenk Trophy in Brazil. So much excitement that I felt compelled to bring a special prelims report to pronounce the 21.58 swum by Cesar Cielo in the morning heats of the 50 free to lead the qualifiers into finals, head of Bruno Fratus and his 21.98.

For Cielo, now swimming with the logo of Adidas on his cap rather than the familiar diamonds of Arena, that’s the second-best time in the world this year, behind only the Olympic champion Florent Manaudou. Don’t be surprised if Cielo is able to get a little quicker this evening: In the past at this meet, he’s been very good in finals of these sprint freestyles.

Though this time is slower, so far, than he was at Maria Lenk last year, it is faster than he was at the Olympics, so for now his training under new coach Scott Goodrich is going well, at least.

In the other men’s prelim, the 400 IM, Olympic silver medalist Thiago Pereira did in fact race, but he just skated into finals in 4:30.34 as the 7th seed. Much speculation has been that this was a race swum simply for the team scoring, and not one that he’s actually been training for.

Inge Dekker took the top seed in the women’s 50 free in 25.25, followed closely by Brazilian 20-year old Graciele Hermann in 25.32 and Alessandra Moarhioro in 25.48. The World Championship qualifying mark is 25.34, meaning the Brazilian women have earned their first new qualifier for Barcelona at this meet.

Cielo is the fastest swimmer! In Barcelona he is going to do a great race in 50Free and 50Butterfly.

Another huge drop for Brandonn

Where are you seeing the results Raf?

The men’s 50free is the only race where our fellow brazilians have depth like we have in the US.

Not to mention the girls side that looks more like 15-16 age group times.

Quite close the both are.. not so big advantage on LCM as was on SCY

Chiereguinni is actually looking better than Morozov on LCM.. 21.88!

Didn’t Morozov swim 21.7something in the semis?

Yes.. I acutally corrected the statement on my next post..that the amazing difference Morozov set on SCY did not translate to LCM.. let´s see the 100 free!

Nathan is the guy on a roll too since the olympics , that’s for sure . he will probably be very prepared for both 50 and 100 in Barcelona . It will be a great battle for sure between 8 guys …

I gotta see how the US Trials pan out before I make a call … I think Adrian has a lot of untapped talent in that event and he could come out and surprise us all. However, Cielo is looking pretty good right now, I won’t take my money off him.

Philip Johnson,
I saw the finals live on TV(HDTV).For his standards, Cielo start was very weak.Near half body behind Nicholas dos Santos, with a strong finish(he made 21.57).He told live on tv(post-race interview) his start is suffering and underwater too because he didn t make the perfect preparation because the recovery of his knee injury.Without his powerfull start, i can not see him dipping under 21.30.
Right now, my favorites are 1)Manaudou,2)Adrian and 3)Cielo.