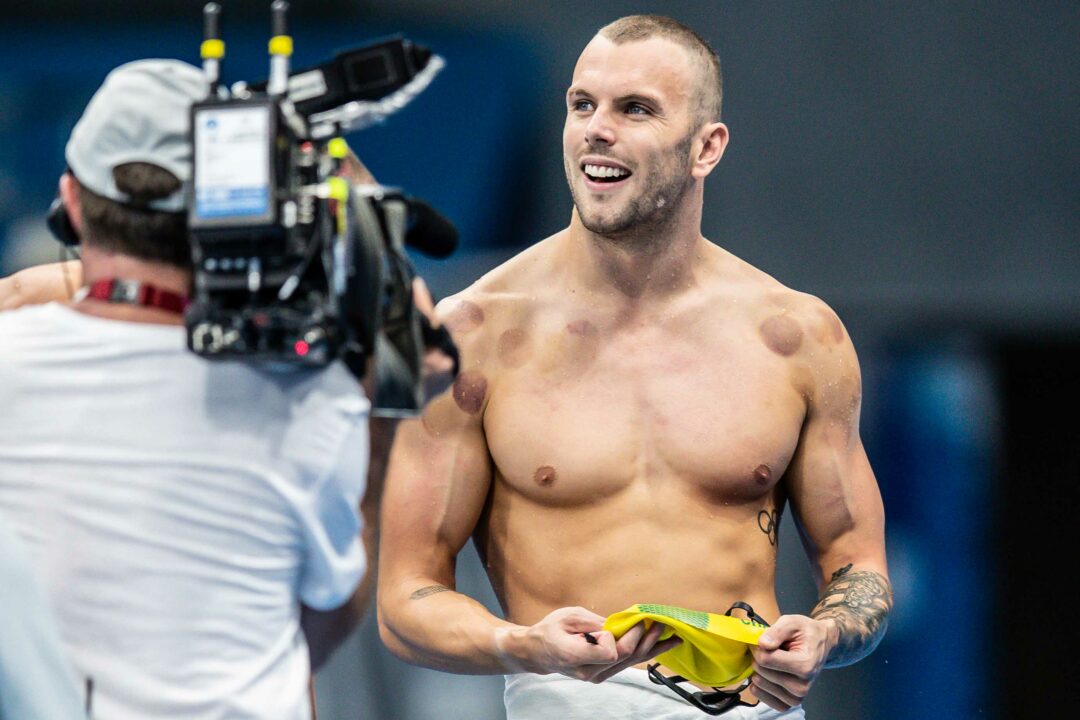 Day 1 of the 2022 Australian Short Course Championships began with a bang as Kyle Chalmers ripped the fastest 200m freestyle time of his career. Archive photo via Jack Spitser/Spitser Photography

Day 1 of the 2022 Australian Short Course Championships began with a bang as Kyle Chalmers ripped the 2nd fastest 200m freestyle time of his career.

After establishing himself as the top-seeded swimmer in the event with a morning swim of 1:42.58, 24-year-old Chalmers of Marion busted out a mighty 1:40.98. That not only took the gold tonight at Sydney Olympic Park Aquatic Center, but it also nearly took down the longstanding Aussie national record in the event.

Cameron McEvoy remains the fastest Aussie ever with a national standard of 1:40.80, a time he put on the books in 2015.

Hobson’s time checks him in as 5th fastest U.S. performer in history while House now represents the 8th fastest American all-time. Look for an additional post on these performances.

Chalmers is coming off of a successful Commonwealth Games where he took gold in the 100m freestyle and collected a haul of relay medals. This was after the man underwent additional shoulder surgery to address a nagging injury. He has now had surgery on both shoulders in additional multiple heart-related procedures to address his Supraventricular Tachycardia (SVT).

Is he going to swim the individual 200 at the WSC? He has a record of pulling out of events to save his energies for the 100. Australia will have a pretty strong 4X200 team even without Winnington and Southam. What is the USA team likely to be? If they send something more than a half strength team I think they’ll win it.

The selection policy allows for swimmers at Junior Pan Pacs (Southam) to be selected.

Swimming Australia stuffed it up by having the live results not readily available at the start of the meet and choosing an unknown viewing platform to livestream the event.. whatever happened to the great work done by both Amazon Prime and 7plus and even SwimTv to uplift Australian swimming?

Fair points but, to be fair, SC Nationals has not been streamed in the past and has had negligible profile so there was probably 0 interest from operators like Amazon Prime or 7+. 100% concur regarding live results.

One can only hope that there will be some decent stream in place for SC Worlds.

How can we generate interest in SC worlds when the Aussie trials themselves are not being shown except on some random Komunity tv that I’ve never heard of.. I would have been happy with just YouTube or the previous swimtv coverage

Kommunity TV is actually part of NewsCorp launched back in June, so make of it what you will. Ostensibly, its stated aim is the streaming of grass-roots/community sport.

The reality is that no major broadcasting outlet was going to touch SC Nats so this was probably the best offer they could get.

Do I think they’ve made the right choice ? Doubtful but then again I couldn’t be bothered sending 5c in the direction of any Murdoch media vehicle. However, whilst I fully concur with your view regarding the choice of streaming vehicle; I really doubt that quality/availabilty of streaming would be moving many, if any, percentage points of public interest in SC Worlds