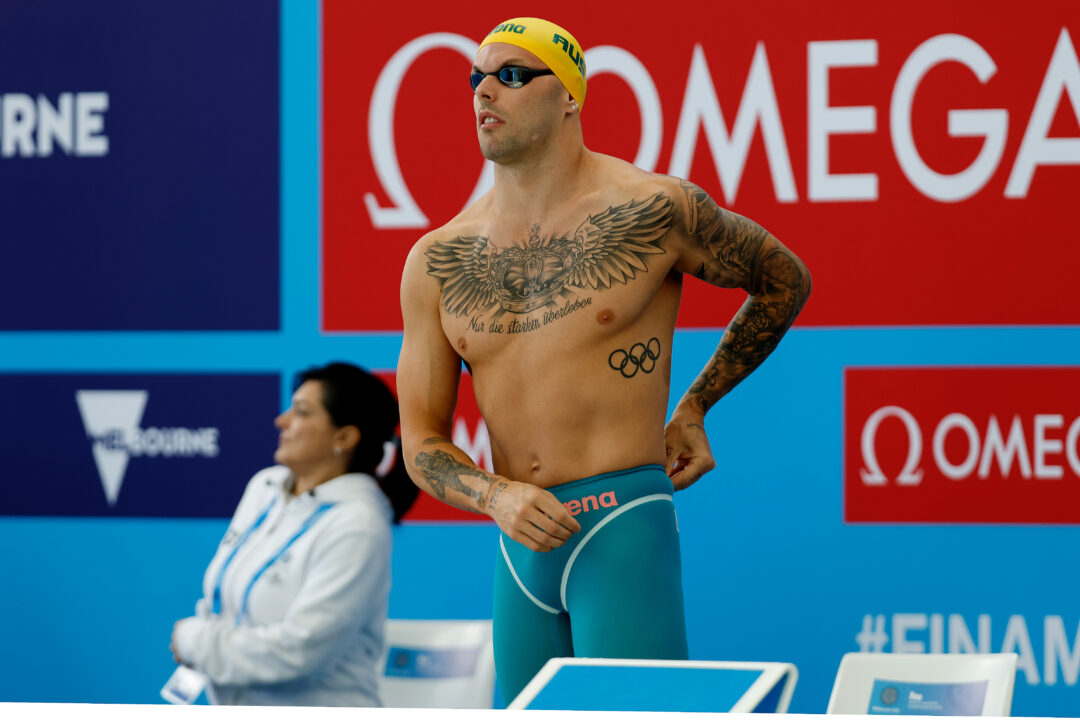 Olympic champion Kyle Chalmers had to settle for silver in his pet event of the 100m freestyle on night two of the 2023 South Australian State Championships. Archive photo via Con Chronis/Arenasport

Multi-Olympic medalist Kyle Chalmers was back in the water on day two of the 2023 South Aussie State Championships, but the 24-year-old ace had to settle for silver in his pet event of the 100m free.

Chalmers was neck-and-neck with 19-year-old Maximillian Giuliani of Miami, with the pair ultimately getting to the wall only .01 apart. Giuliani stopped the clock in a time of 49.77 while Chalmers earned a time of 49.78 in this early-season meet.

For Giuliani, his result tonight checks in as the teen’s 2nd fastest, sitting only behind his personal best of 49.66 produced at the 201 Queensland Championships.

Chalmers wound up in the runner-up spot in his other individual event on the night, the men’s 100m butterfly. Posting a mark of 53.90, Chalmers was rendered the silver medalist behind teammate and Olympic finalist Matt Temple. Temple touched in 53.03 to top the podium.

The pair had earlier competed in the men’s 4x50m medley relay, helping the Marion squad grab gold in a time of 1:46.41. Temple’s fly leg put up a time of 23.71 while Chalmers anchored in 22.90. Chalmers also anchored Marion’s 4x100m free relay as the final event, with the short course World Record holder punching a split of 49.51.

Meg Harris dove in several times this evening as well, kicking off day two with a victory in the 4x50m medley relay. She produced an anchor of 24.65 to help Marion collectively clock 1:44.94 en route to climbing atop the podium.

Harris also earned a dominant win in the individual 200m free, putting up a time of 1:59.29. That result represented the only outing of the field to get under the 2:01 threshold. She finished up the night with a 54.14 anchor on the Marion women’s 4x100m free relay.

Jenna Strauch of Miami doubled up on her 200m breast victory from last night with another gold in the 100m distance in this session. The 25-year-old logged a mark of 1:08.75 to get the job done.

Visiting Japanese swimmer Tomoyuki Matsushita hit a time of 1:59.32 to win the men’s 200m IM. The 17-year-old is one of the nation’s rising stars in this event since the retirement of Olympic champion Kosuke Hagino.

Matsushita recently produced a new lifetime best of 1:58.13 at last December’s Japan Open, a time which rendered the teen Japan’s #7 performer of all-time in the 2IM event.

No son, even winning the race doesn’t put your name in the headlines.

A lot of World records have been set in that pool!

Thought he’d be a bit quicker after that relay split yesterday.

Kyle is saving himself for the 800m lol

Kyle has been partying with Adam Peaty for the last 4 weeks!

When was the last time Chalmers lost to another Australian in a 100 freestyle? 2016 trials?

At least Kyle is competing

It was obviously a joke.

Dressel has not lost the 100 free this year.