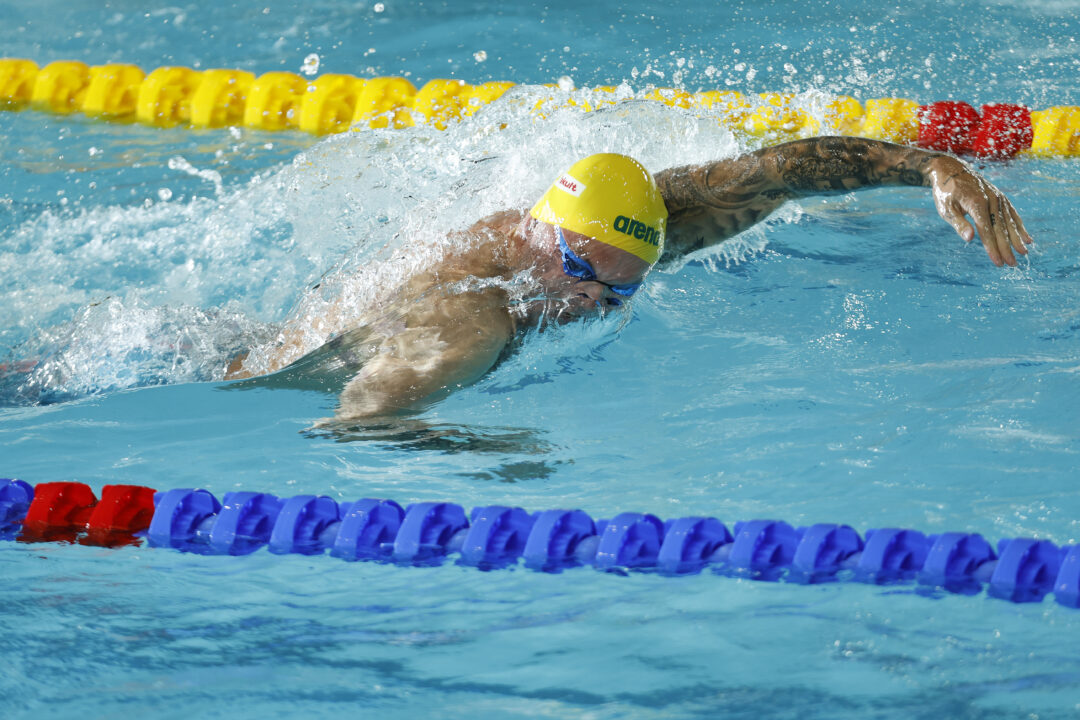 The 2023 South Australia State Open Championships began today from down under with the likes of Olympians Kyle Chalmers and Meg Harris diving in. Archive photo via Con Chronis/Arenasport

The 2023 South Australia State Open Championships began today from down under with the likes of Olympians Kyle Chalmers and Meg Harris in the SA Aquatic & Leisure Center pool.

Chalmers took on two events on the day, beginning with Marion’s men’s 4x50m medley relay. Collectively clocking a time of 1:36.13, the squad topped the podium, with Chalmers producing an anchor leg of 22.00.

The 24-year-old then raced the individual men’s 50m free, posting a time of 22.54 to wind up at the wall first. The time sneaks Chalmers in among the top 25 performers on the season worldwide, with the South Aussie still looking forward to the 50m/100m fly, 100m free and 800m free events at this competition.

For her part, Harris also took on Marion’s medley relay for the women, logging a fly leg of 27.29 to help the team produce a winning time of 1:58.53.

Harris also served as the anchor on Marion’s women’s 4x100m free relay, sealing up gold with a final leg of 54.39.

Although Harris bowed out of the individual 50m back, the 20-year-old did race the 50m free. She posted a time of 25.20 to grab gold, with her teammate Madi Wilson no-showing the event.

Another swimmer making a mark on the season’s world rankings was 19-year-old Sam Short. Competing in the men’s 400m free, Short of Rackley put up a season-best result of 3:47.86 to handily win the event.

Short owns a lifetime best of 3:44.34 in this 4free, a result he registered at the 2022 Australian National Championships.

I just noticed Australia is back to using stricter QTs than the FINA ones. Chalmers also swam a 48.6 in the free relay Retta – he was on the B team for some reason.

Yeah I did think same

Short and Winnington went 3:46.6 and 3:45 at the Queensland champs. Those rankings need updating.

A good in season time from Strauch. Given the QT for Worlds is 2.23.91, it would not surprise to see her nudge that time at her next major outing (NSW Open in March and/or Nationals in April).

Decent 50back times from Job, however to date, she has shown little signs of being competitive beyond that range.

Good in season 400free from Short who has to be seen as part of the selection picture for that event although I feel Winnington has one place locked and Neill’s 200 speed may be telling given Short lacks a major “change up”. His path to selection is most likely via 1500 and maybe 800 where he will need to drop just under a second… Read more »