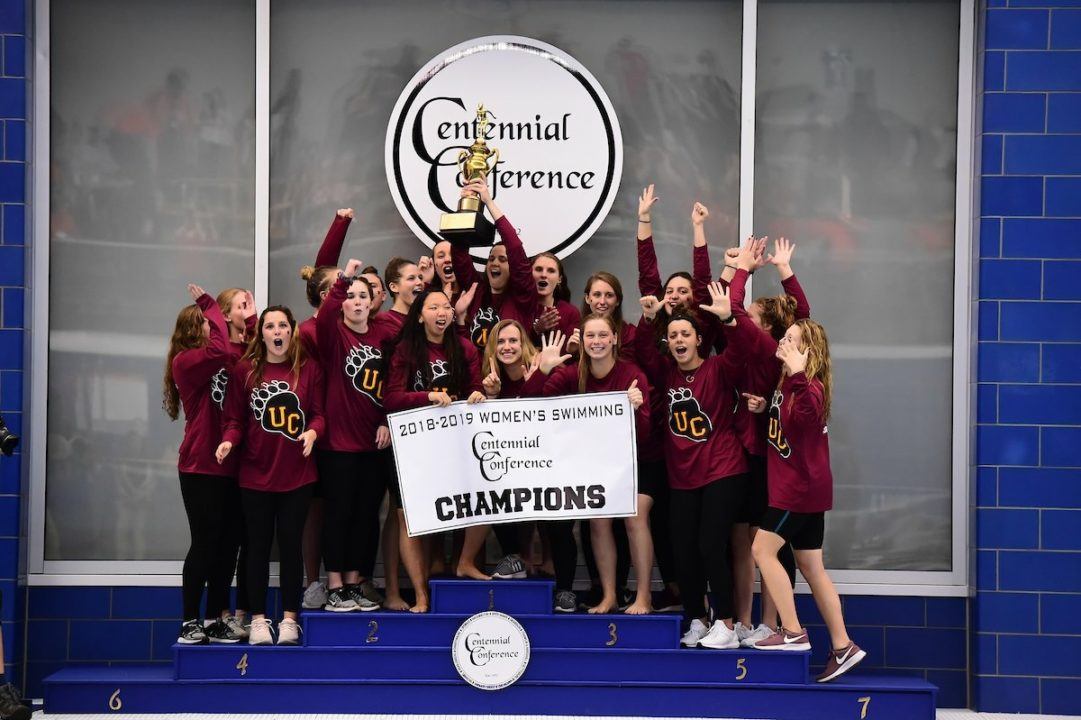 Sprint freestyler Mason Hodge has announced his commitment to join Wheaton College (IL) as a member of the class of 2025.

The Centennial Conference Championships is a NCAA Division III conference solely composed of schools from Pennsylvania and Maryland. On the women’s side, the Ursinus bears headed into this year’s meet on a five year win streak, while Gettysburg come in as the defending champions on the men’s side.

Of note, the conference was absent of any diving events – all points were won in between lane lines.

Sweeping all five of the contested relays, Ursinus dominated on the women’s side, extending their conference win streak to six years in a row. The Bears tallied a total of 816.5 points, well ahead of Swarthmore’s 676 for second.

Ursinus’s 200 medley relay team of Peyten Lyons, Sophie Lear, Clara Baker and Sophie May set a commanding tone from the get-go, setting a new Centennial Conference record of 1:43.99. The previous conference record was a 1:45.03 set last year by the Bears.

The next day, senior Peyten Lyons claimed Ursinus’s first individual title – Lyons won the 200 IM in a time of 2:06.76, which marks the fourth consecutive year she’s won the event at conference. Later on in the meet, she registered another four-peat in the 100 back, clocking a 56.99.

In the 400 medley relay, however, Lyons lead off Ursinus’s team in a time of 56.28, lowering her own conference record. Teammates Haley Sturla, Baker and Lear followed up to finish in a new conference record of 3:47.67, two seconds faster than their old record set last year.

The day that Lear won the 100 breast was a notably strong day for Ursinus, as they won every single event contested that day.

Dickinson’s Olivia Lyman was the only multiple event winner not from Ursinus. The senior swept both of the distance free events, taking the 500 free with a 5:01.42, and touching first in the mile at 17:08.73.

Lyman’s teammate and classmate Katie Schmidt raked up another win for the Red Devils, emerging victorious in the 200 back with a time of 2:03.95.

Freshman Katie Cooper out of Gettysburg also had a successful rookie season as she topped the field in the 200 breast, stopping the clock at 2:22.73.

Ursinus’s 400 free relay squad comprised of May, Baker, Lyons and Near capped of their dominant performance with another conference relay record, recording a time of 3:28.61.

Swarthmore got the ball rolling with a new conference record in the 200 medley relay. The team of Horace Shew, Chris Smith, Jeff Tse and Alec Menzer touched the wall in a time of 1:30.84, well ahead of the Garnet’s two-year old record of 1:31.57. In a time trial, however, the same Garnet relay actually significantly improved on their time – clocking a 1:30.10.

The Garnet men went on to double up in relay wins in the first session: Smith, Michael Lutzker, Ethan Bergmann and Alec Menzer teamed up to establish a new meet record at 6:45.79.

Swarthmore’s 400 medley relay significantly lowered the conference mark; Tse, Smith, Jeremy Rockaway and Alec Lawless came into the wall in a time of 3:18.52, besting Gettysburg’s record of 3:20.36 from 2015

Two Swarthmore freshman picked up individual wins during the final session. Tom Ward and fellow teammate Lutzker went 1-2 in the men’s mile, finishing in times of 15:42.82 – a new meet record – and 15:49.95, respectively. Jeremy Rockaway claimed the top spot in the 200 fly, posting a 1:51.68.

Tom Graminski of F&M was yet another freshman who earned a conference title on the last night. His time of 2:04.12 secured the victory in the 200 breast, as well as the NCAA ‘B’ cut.

F&M had the final win of the meet, as the 400 free relay team of Schiavone, Brendan Cline, Timothy Gould, and Alec Wahl combined for a total time of 3:01.54, edging out Swarthmore’s runner-up time of 3:02.91.