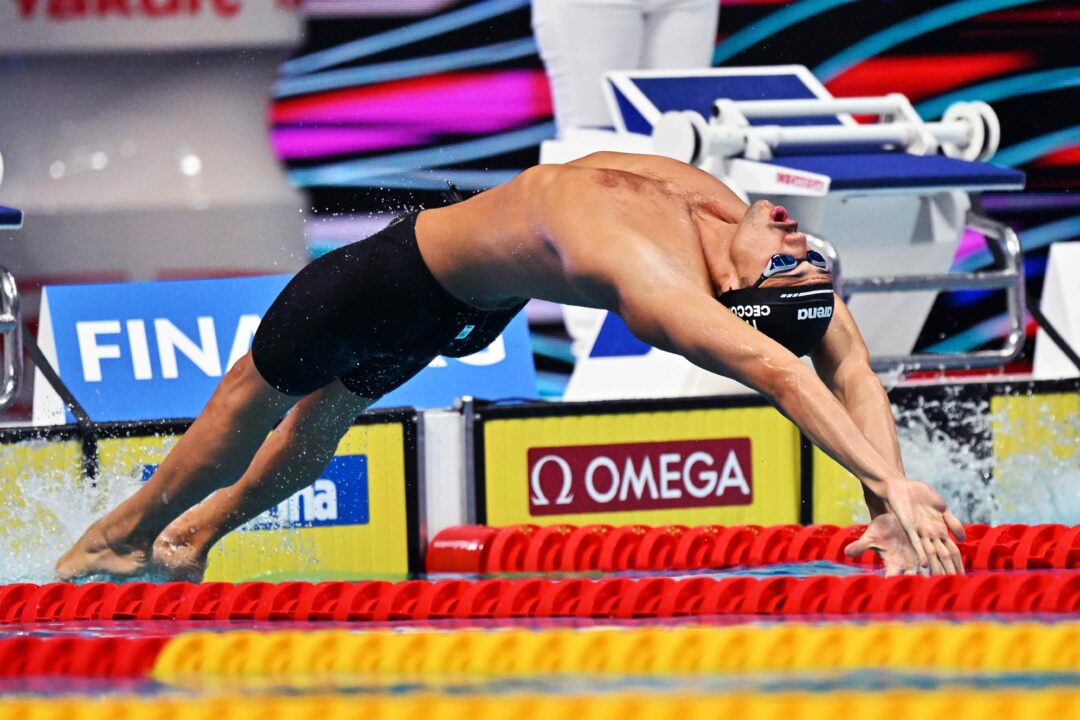 Thomas Ceccon (pictured, 49.62) and Javier Acevedo (50.16) both broke national records as they medalled in the 100 back at the FINA World Cup. Archive photo via Gian Mattia D'Alberto LaPresse

Both Thomas Ceccon and Javier Acevedo wrapped up successful meets at the Berlin stop on the 2022 FINA World Cup circuit with medals and national records in the 100 backstroke.

Ceccon, the LCM 100 back world record holder, challenged Casas for the win, but ultimately ran out of room to chase down the American. He took second in 49.62, shaving .06 seconds off the Italian record. The former record was set by Simone Sabbioni in 2017.

Comparing the two records underscores how impressive Ceccon’s second 50 was. Though he couldn’t complete the comeback against Casas, he had the fastest back half in the field by .17 seconds. In his race against the record, though, he did have enough room, outsplitting Sabionni .62 seconds to just get under the national record.

It was a massive best time for the 21-year-old Italian, whose previous best stood at 50.22. “That’s my PB,” said Ceccon, pleased in his post-race interview. “Under 50 seconds that [was] my goal.”

Acevedo also set a national record in his medal-winning swim. He tied for bronze with Apostolos Christou in 50.16, setting a new Canadian record. He took .24 seconds off the former record of 50.40, which Cole Pratt set during an ISL match in 2020.

These splits are the inverse of the comparison between Ceccon and Sabbioni. While it was Ceccon’s back half that made the difference for him, it was Acevedo’s opening 50 that propelled him under the Canadian record. Acevedo was still faster than Pratt coming home, but only by .03 seconds. However, he opened the race two-tenths faster than Pratt did.

Coming into the meet, Acevedo’s lifetime best stood at 50.60, so this is a significant improvement for him personally as well.

Both Ceccon and Acevedo are slated to race at the second stop on the World Cup circuit in Toronto, Canada, Acevedo’s home country.