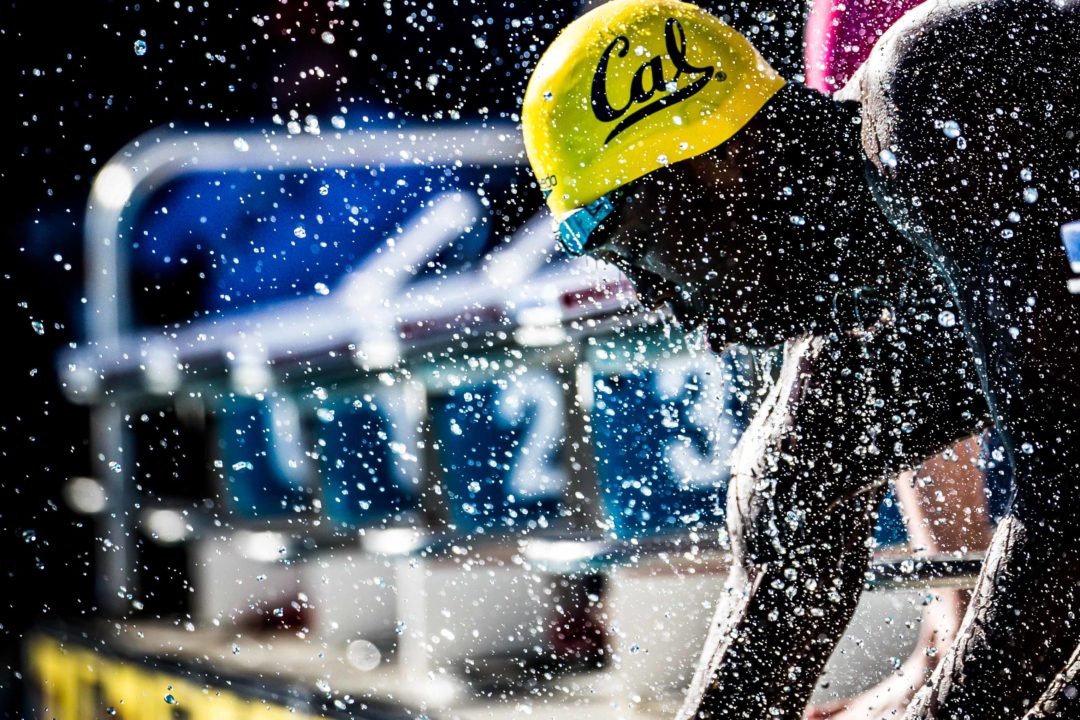 Reece Whitley won two events as Cal beat Stanford despite temperatures in the 50's as both schools wrapped up their regular season. Current photo via Jack Spitser/Spitser Photography

Both Stanford and Cal wrapped up their shortened seasons at a dual meet hosted by Cal. The competition was the third time the two schools have faced off this year, as they both started their seasons with two unscored duals meets against each other. While temperatures hovered in the mid-50’s at an outdoor facility, both teams posted impressive times while wearing tech suits.

Notably absent from the meet for Stanford was Jack Levant, the school record holder in the 200 free.

Cal got out to a strong start in the 200 medley relay, finishing with the two fastest times in the event. The team of Daniel Carr, Reece Whitley, Bryce Mefford, and Bjorn Seeliger edged out the Cal B-relay by just .37 to win the event, with the final times being 1:24.38 to 1:24.75. Helping to keep the B-relay in the race was a 19.93 split by Ryan Hoffer on the fly leg.

The 1000 freestyle also featured a 1-2 finish from Cal, with Zach Yeadon and Sean Grieshop both dipping below 9:00. Yeadon emerged with the win, touching in 8:49.88, while Grieshop was seven seconds behind in 8:56.92.

While Lasco holds the third-fastest time in the country in the 100 back, it was Daniel Carr and Bryce Mefford leading Cal in the event by nearly two seconds. Carr touched in 45.61, while Mefford was just .02 behind him in 45.63. Both of these times rank them within the top-10 for the event this season.

This shows off the incredible depth of the Cal backstroke group, which is the best such group in the country. Lasco ranks 3rd in the country this season, and Cal now hs 3 of the top 8 swimmers in the NCAA in the 100 back with the major conference championship meets yet to begin.

The 100 breast featured another tight race, this time between Cal’s Reece Whitley and Stanford’s Daniel Roy. Finishing just .05 ahead of Roy, Whitley touched first in 52.89. Last year the two were the top-2 finishers in the 200 breast at the Pac-12 Championships. Roy would win the 200 breast later in the meet, beating out teammate Ethan Dang with a time of 1:52.20.

In his lone individual event of the day, Ryan Hoffer, whose time from earlier this year leads the nation, won the 50 free as part of a Cal 1-2-3 sweep. Hoffer won the event in 19.07 and was followed by Nate Biondi (19.84) and Bjorn Seeliger (19.94). Unlike his teammates in the event, Seeliger wasn’t wearing a tech suit for the race.

After being swept in the 50 free, Stanford returned with a sweep on the 1-meter diving board. Conor Casey, Noah Vigran, and Hunter Hollenbeck finished with the three highest scores, with Casey winning with a final score of 373.58. Casey was the PAC-12 champion last year on both the 1-meter and 3-meter diving boards. On the 3-meter Casey and Vigran switched spots, with Vigran winning in 431.18.

The 100 free was won by a Stanford freshman, Jonny Affeld. Affeld dropped nearly half a second from his best time to finish in 43.05, .1 ahead of Bjorn Seeliger.

Trenton Julian beat out the 1000 free champion, Zach Yeadon, in the 500 free, finishing in 4:14.08. That time currently ranks Julian as the 8th fastest performer in the event this season.

The 100 fly went to another Stanford freshman, Ethan Hu. Hu lead the field by over a second and a half to finish in 45.93.

Beating the defending PAC-12 champion, Bryce Mefford finished with the fastest time in the 200 IM. Mefford, was only .5 off his third-place time from PAC-12’s last year, finishing in 1:44.07. Mefford finished 3rd in the 100 back at the 2019 NCAA Championship meet.

Cal finished the meet with another relay win, this time in the 400 free relay. The team of Seeliger, Hoffer, Julian, and Lasco finished in a time of 2:51.11 to win by over a second.

I may be wrong, but I think we will have to wait until the PAC 12 Championship at the end of this month which is not being held in Washington state but I think one of the southern states.

Sub-20 fly split in a dual meet is pretty fast, even if it was in a tech suit.
Anyone know the fastest 50 fly split ever?

No Hugo Gonzalez in this meet, although he swam a couple events against USC in January. I don’t believe Hugo has recorded a time that likely will get him an invite into NCAAs unless he has an LCM time that somehow counts. It appears that the Bears are counting on Pac 12s to get invite times for Hugo, Chris Jhong, Dare Rose and possibly Forrest Frazier.

Someone needs to give Preston Forst a red tag in this. He is Greensboro, NC’s hometown hero. Man has a BRIGHT future ahead of him.

Would be nice to have the times from the medley relay.

Results are on meet mobile. Cal A and B both went 1:24s