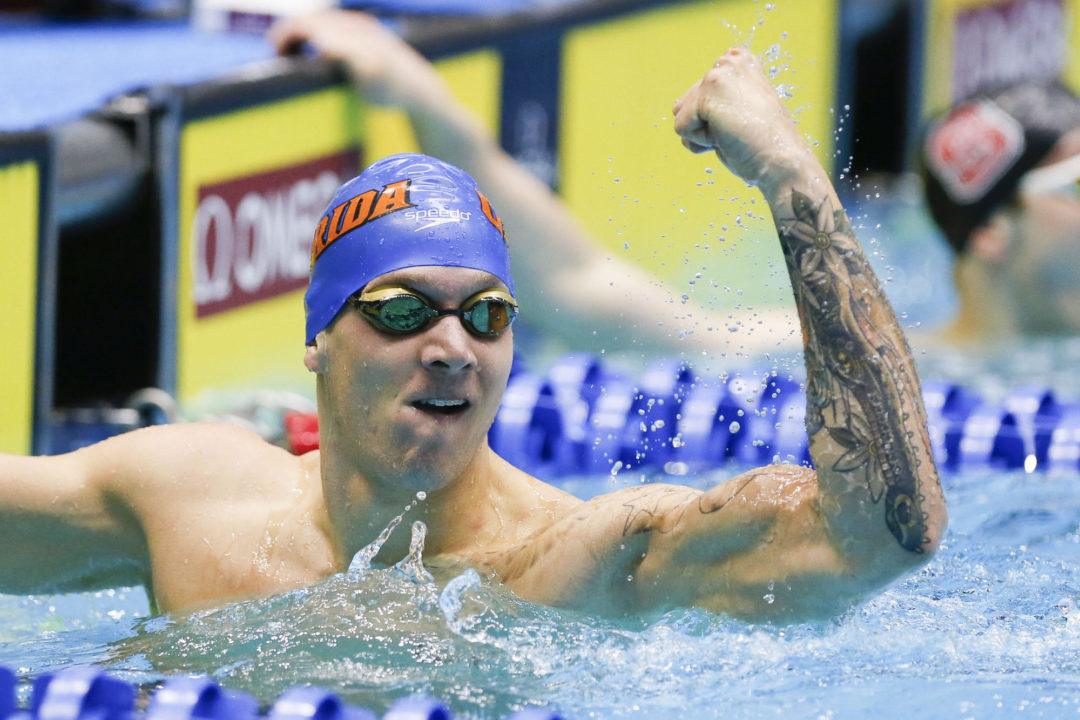 Nobody has ever been as fast in September in the 50 yard free as Caeleb Dressel was on Friday. Archive photo via Tim Binning/TheSwimPictures.com

The Florida Gators dominated the metaphorical gold medals on day 1 of the 2017 season-opening All-Florida Invite. That included a 19.21 50 yard free victory from U.S. Olympian and 7-time World Champions Caeleb Dressel, who scratched the 200 IM final on Thursday in favor of the 50 free – one of his specialty events.

Dressel’s two swims are the first two sub-20 in the event nationally so far this season, and just misses the NCAA Automatic Qualifying Time of 19.05 (though 19.10 will definitely earn an invite). Further, as far as we can tell, it’s the fastest time ever done in September – bettering a 19.50 done by Alabama’s Kristian Gkolomeev on September 12th, 2014. Gkolomeev finished 2nd behind a then-freshman Dressel at NCAAs in the 50 free that year.

Dressel’s 3rd swim of the evening was on the fly leg of Florida’s medley relay, where his recorded split was 47.79, though there were errors in Florida’s splits, so that very well may be mis-timed. The Gators won that relay in 3:17.13. Dressel took Worlds gold in the long course 100 fly this summer in the 2nd-fastest time in history, behind only Michael Phelps.

While Dressel pulled out of his chance at an individual double on day 1, his sophomore teammate Savanna Faulconer did not. She entered finals as the top seed in the 500 free and 200 IM, and after winning the former in 4:52.34 (almost two seconds clear of the field), she just barely missed the 2nd win by taking 2nd place in the 200 IM in 2;02.43. Her teammate Kelly Fertel beat her out by .01 seconds in 2:02.42.

Lexi Smith swam 23.03 to win the women’s 50 free ahead of Sherridon Dressel (23.41, of the same Dressels), and came back an event later to anchor the Florida State winning 400 medley relay (3:42.32). U.S. Summer Nationals finalist Natalie Pierce split 1:01.37 on the Seminoles’ breaststroke leg.

This meet has a pared-down field from prior years, where it truly was nearly an all-Florida invite. This year, the Florida and Florida State men are the only teams attending, while the women’s field also includes Miami (who don’t sponsor men’s swimming).

Whatever category it is, Dressel will always find a way to be the fastest.

Except for practice, that belongs to Schooling.

early season predictions: Dressel never does a faster 50 this season, missing an “A” cut, and for some reason, it takes an “A” cut to make NCAAs. Dressel fails to qualify for NCAAs in the 50 free. The swimming country is stunned, even more so than when Donald Trump won the presidency.

I think this is the only possible outcome tbh

Expecting a 18 low in NCAA.

Was he wearing one of them magic tech suits?

He was wearing a speedo

Huh so you can go fast without one if you have talent?

And why is this news exactly? Kid owns the american record in the 50 and 100 free so of course he’ll be the fastest a certain month. Next article “Caeleb Dressel swim fastest time on 5th of October at 8 pm.” It’s not shocking by any means.

He is the most exciting male swimmer in the world right now. Anything he does is news

We all clicked on it so….

The recap of the all Florida invitational is certainly news and Dressel, one of the top male swimmers in history now and the fastest ever in yards, is news because fans want to see how he’s doing. The fastest in September part is just a fun fact for some die hard fans who are interested in that kind of thing. There is absolutely no reason to complain about the article.

Only 117 men have 2 or more Olympic golds for any reason.

I don’t imagine many of them have 7 World Championship gold medals.

Wondering will Schooling swim this event in NCAA 2018 since he was third this year. It’s always fun to see both Dressel and him competing

Think he will. Opportunity to get more points for Texas since they can win the 800 free relay without him because of the depth they have

Lol, They didnt win it last time.
NC State were the winners with a record.
Wont change in this time either .
Held, Vazaios, Molecek, Ress will win it for wolfpack.
Florida may be the closest challengers with Szaranek, Jan, Rooney and Baqlah .

Just realised they graduated Conger and Smith. May or may not put Schooling in, but they definitely have others to swim the relay instead, its whether or not they can deliver like Schooling can

Deliver what? A 1:45 200 fly effort at NCAAs or a third-place/not best time finish effort like Worlds? Joe doesn’t always deliver.

What I meant was in relays

J Pine does have a point, Crooked Donald, he always carries the relays home

He didnt swim the 800 free relay in the final.

You can’t expect swimmers to go best times every year, it’s been well documented Schooling didn’t get back into the water until like December last year, of course he wasn’t going to go a best time at World’s. The 1:45 200 fly was him giving up howevrer

It’s been well documented that Schooling was swimming duals last October and November. Saying he didn’t makes for a good excuse.

From my understanding when he says he didn’t start training until December or whatever he means he didn’t start seriously training. Meaning he was inconsistent and not giving 100% before then, but was still swimming.

Exactly. Swimmers that pushed so hard for Rio need some kind of break. I expect he’s right where he needs to be … he’s got a pretty decent coach ya know 🙂

It’s well documented he said he didn’t get in the water until Dec. He was called out on that and changed his story to I didn’t start taking it seriously until December

Texas couldn’t win it last year with all their superstars

Schooling is a valuable swimmer to Texas. Before Schooling came in, Texas wasn’t very dominating. They didnt win since 2010. Schooling started swimming for texas in 2015 and winning streak continues till 2017. A 4-peat will be amazing and it will also be the hardest to achieve.

He is not a one man show. He has definitely contributed but don’t forget about Conger, Murray, Smith Haas Licon Glass and on and on and on…..,

Licon was the teams star

The US will always be the fastest in yards because nobody else swims it!

thats not new by the way lol

Well Dressel is also the real fastest meters swimmer ever so….