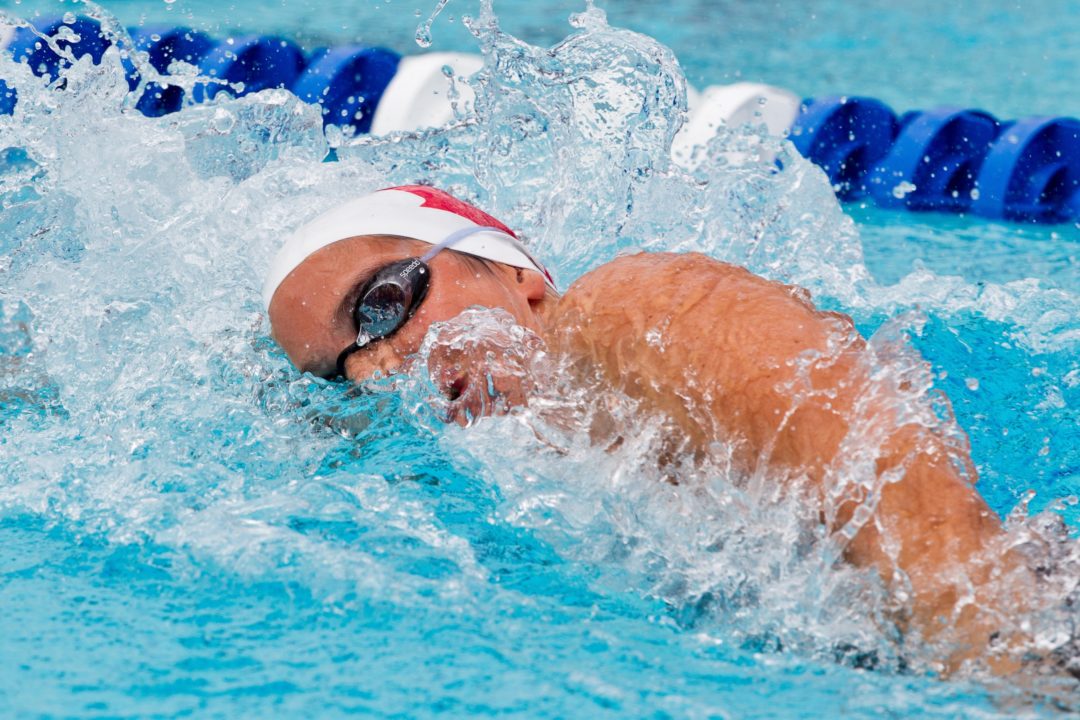 As we move into day 3 (out of 6) at the Canadian Olympic Trials, the totality of the squad started to take shape and one thing is becoming very clear – the 2012 squad is going to be young, even younger than we thought. It’s a combination of young stars evolving before our eyes with the veterans simply not stepping up.

The theme wasn’t immediately obvious in the 200 free, as this whole group is all sort of middling-in-age, but this race brought us one of the great moments we’ll see in the swimming year. Barbara Jardin took the win in 1:57.34, and Sam Cheverton took 2nd in 1:57.98, so they knew that they both had individual spots for London.

But immediately after an exciting race, math doesn’t always come easily. Brittany MacLean, winner of the 400 free, was 3rd in 1:58.09; and Amanda Reason was 4th in 1:58.72. The entire natatorium went silent, as the meet announcer stood up and leaned across the table to a nearby official with a calculator. The times off the top 4 had to add up to 7:58.95, with some nervousness coming after Julia Wilkinson, one of the country’s best, scratched the race.

And then, with all swimmers frozen over their respective laneropes, the voice echoed clear through the facility. “The top 4 swimmers are all going to the Olympics!” Though they ultimately cleared the mark easily, the swimmers went bizerk in the pool, paralleling the fans in the stands. It was an awesome moment that you could never see at an American Trial and should come away as one of the defining moments of this meet.

Brittany’s older sister Heather MacLean didn’t clear the time for being a relay alternate, which means that there’s still plenty of room for Wilkinson to hop on this relay at the Olympics, if the coaches decide that this is the way to go.

Ryan Cochrane, though likely being totally unrested for this meet, went out very well in the 400 free. His final 100 meters weren’t as good as the firs 300, but he still touched in 3:47.07. He is unlikely to be rested much (if at all) for this meet, as his times from World’s effectively guaranteed him a spot for London, so this time was awesome for him. That’s the 9th-best time in the World this year.

Cochrane and his Island Swimming teammates took three of the top four spots in this race, with Alec Page touching 3rd in 3:53.20 and Keegan Zanatta taking 4th in 3:54.66. Zanatta and Page combine with 18-year old Chad Bobrosky (3:52.65) from Cascade Swimming (USC in the United States) to make three swimmers born in 1993 (either 18 or 19 years old) in this top four too. More bright futures for the Canadians, though none of them made the Olympics.

This race was hailed as the race of the meet, and it lived up to that billing. Former NCAA Champ Jillian Tyler and Tera van Beilen separated themselves from the field around the 60-meter mark. The younger van Beilen, one day shy of her 19th birthday, held the lead, but Tyler’s stroke remained more compact and with a slightly quicker turnover for about the same distance on each cycle.

Tyler edged ahead coming past the flags, and got to the wall first in 1:07.18, and van Beilen touched second in 1:07.38. Those are best times for both swimmers (Tyler by a tenth, van Beilen by many more).

Those two will both be headed to the Olympics, but who was left out was fairly shocking. Martha McCabe was 3rd in 1:08.18, and National Record holder Annamay Pierse was 6th in 1:09.21. McCabe’s swim wasn’t too bad – she was still right around her career best, and should be fine in her best race the 200. Pierse now looks like she’s in real trouble to make the Olympic Team. She’s better in the 200 as well, but it’s clear that the young-guns of Canada are here to play.

Aside from van Beilen, take 19-year old Ashley McGregor, who was 4th in 1:08.39, which is a best time by just over a second. That lines her up for at least a 2:25-high in the 200, whereas Pierse’s swim aims her more at a 2:27. Pierse will have a serious battle on her hands if she wants to make this team.

And after the roars were brought to the crowd after the previous three race, the facility was stunned in silence after this 200 breast. So disappointed were they at the outcome, that they forgot to cheer an outstanding win by Scott Dickens to earn his second Olympic event and National Title in 2:12.69.

But they were shocked, because one of the most popular swimmers of the 2000’s in Canada, Mike Brown, added a full second to his prelims time and finished 4th in 2:14.95. The two-time Olympian seems to have made his attempt at a comeback for a third try a bit too late, as we’ve seen from many swimmers this year.

Normally, relay events at Olympic Trials meets aren’t that relevant, but in this case it was the Bahamas trying to swim a mark that would earn them a bid for the Olympic Trials. They at least gave themselves a chance in 3:47.42, including a 54.53 from Auburn National Champion Arianna Vanderpool-Wallace led the relay off in a blazing 54.53. That’s a top-25 time in the world, and just .07 away from her own National Record in that individual 100.