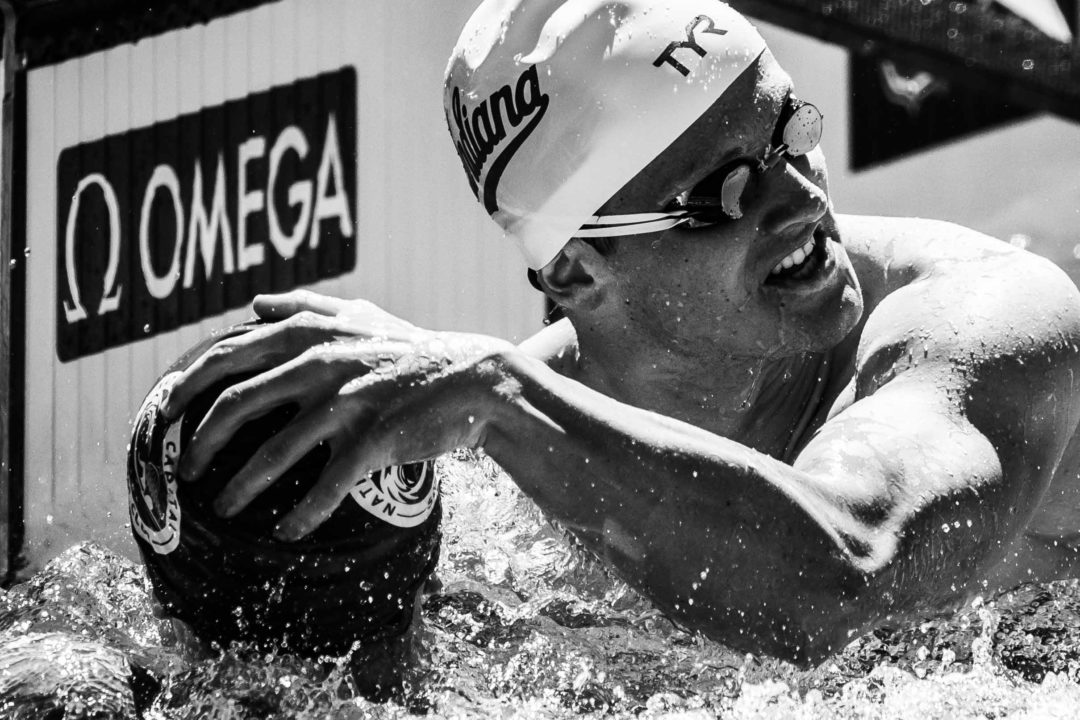 Sophomore Brendan Burns was just .05 seconds off a lifetime-best in the 100-yard backstroke at Indiana’s two-day time trial meet.

Burns, a top-ranked recruit who appeared primed to score in all three of his events at last spring’s canceled NCAA Championships, came up with two huge swims on Friday.

The 19-year-old went 45.80 in a 100-yard backstroke. That’s just a tick off of Burns’ career-best 45.75 put up at last spring’s Big Ten Championships. While it’s not clear if the meet will officially count for NCAA rankings, that swim would put Burns #7 in the NCAA for the season in official short course yards times.

Burns also blasted a 46.12 to win the 100-yard fly. That was a great race all-around for IU, with star freshman Tomer Frankel going 46.29 to push Burns. Frankel, from Israel, is one of the top international prospects joining the NCAA this year, and based on current NCAA ranks, the Hoosiers could have two contenders for big NCAA points in the 100 fly. Burns would sit#14 right now, and Frankel #17.

IU pro Laura Morley was just six tenths of a second off of her own Bahamian national record in the 200-meter breaststroke, one of several post-grads highlighting Saturday’s long course session. Morley was 2:28.46 in a very solid in-season swim. She set her national record almost exactly one year ago, going 2:27.83 at U.S. Open.

Coming off of ISL season as the standout MVP of the DC Trident, Zach Apple went 1:49.42 in the 200 free. That should check in at #5 among Americans this season in the event, a good sign for Apple’s Olympic prospects across the relay-distance freestyle events.

I love watching Brendan Burns race. That kid has a heart of gold and him and GOAT Coach, Ray Looze, and “The Young Genius”, Cory Chitwood, are the perfect combo!

Serious question, why use hashtags (seemingly) unironically on SwimSwam?

I’ll try to stop. Sometimes I’m so passionate about my subjects that I just can’t help myself!

IU men unlikely to be top 8 at NCAAs – the Looze effect kicking in.

Careful… Guerra’s about to come after you

I Win, You Looze!

Depends on who is using eligibility this year. If they have their full roster, great chances at a top 8 and possibly top 4 finish. Blaskovic, fantoni, backes and other potential ncaa scorers not in these results. Also have a previous ncaa champion diver on their roster.

Everyone gets another year, even if they compete this year.