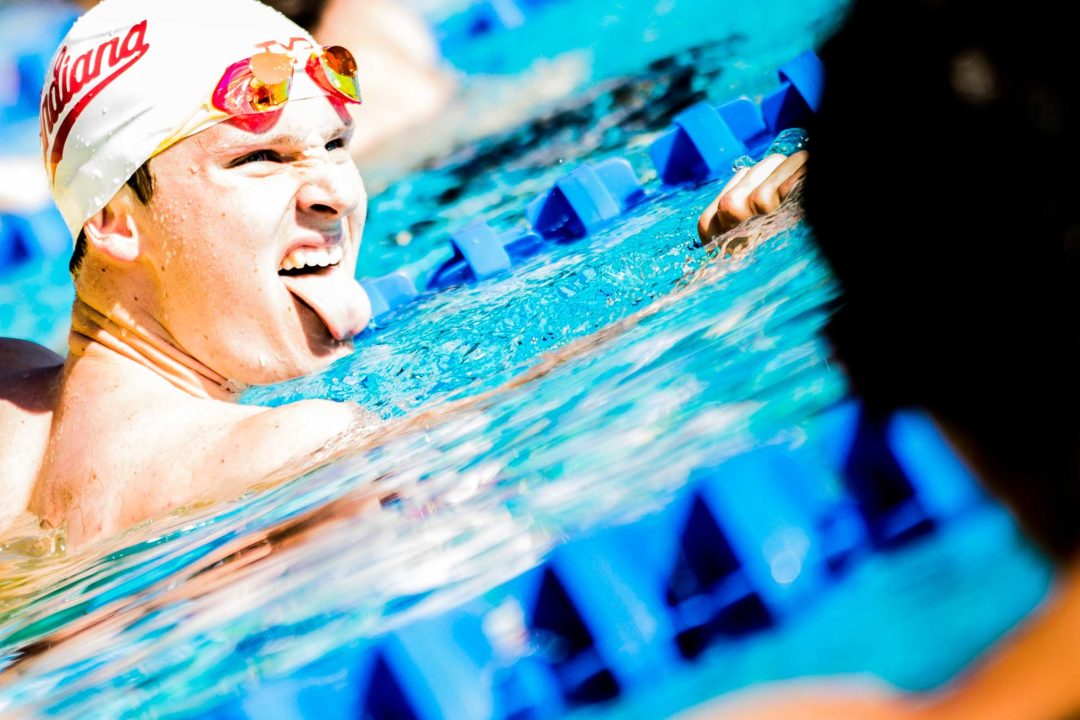 This year's Big Ten schedule makes Brendan Burns' choices more difficult, with the 100 back and 200 fly coming on the same day of the meet. Archive photo via Jack Spitser/Spitser Photography

Indiana sophomore Brendan Burns will swim the 200 fly, but not the 100 back, on day 4 of the 5 day Big Ten Men’s Swimming Championship on Friday.

The 2020 Big Ten Freshman of the Year swam both races at last year’s Big Ten Championship meet, along with the 100 fly, but because of the alterations made to stretch the meet to 5 days this season, the races fall on the same day.

Normally, the 100 back is the same day as the 100 fly – a much more plausible double. The 200 free relay is also on Friday, and while the Hoosiers didn’t use Burns in that race last season at Big Tens, he might be one of their top four sprint freestylers this season. The Hoosiers have used him on all three relays so far (200 medley, 400 medley, 800 free relay).

After a 2nd-place finish in the 100 fly on Thursday, plus his 200 fly on Friday, Burns still has either an individual event or two relays left to swim, though. The Saturday individuals of 100 free, 200 back, and 200 breast leaves an obvious choice, the backstroke race, as his third event, though we’ll probably see him switch back to 100 fly/100 back for the NCAA Championships.

A tight three-team battle sees the top two contenders Michigan and Indiana separated by just 3.5 points, with Ohio State another 15.5 behind in 3rd. Those three are well-separated from the field.

Michigan took a blow on Thursday when River Wright touched 2nd in the 100 fly after being disqualified for kicking past 15 meters underwater on his start, which video confirmed was a correct call. On net, that cost the team 31 points in their battle with Indiana.

Among those top 3 teams, Ohio State has 13 entries on Friday individually, Michigan has 12, and Indiana has 11. After Ohio State had the most divers and diving points coming into the swimming portion of the championship, the other two teams have been clawing positions back, but for the first time all week Ohio State has the most entries and a chance to stem the tide.

hunter armstrong is feeling dangerous in the 100 back