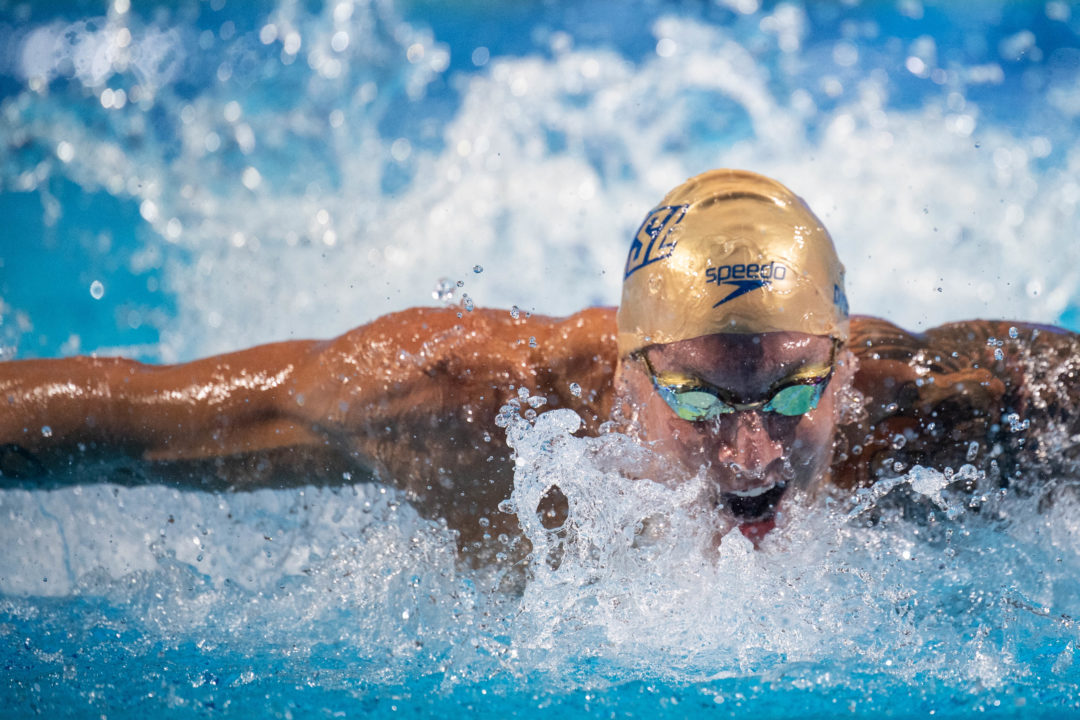 Kathleen Baker: “First time in a hot second that my freestyle leg was faster than my backstroke” (Video)

Baker finished in 2:10.30, moving past Cox to become the 2nd-fastest swimmer in the world this year, with only Kaylee McKeown (2:08.23) ahead of her

The 2020 season opener moved at a breakneck pace – and the lack of true live results left a lot of major storylines and developments overlooked.

We’re going back over the session for a few of the really notable storylines to check in on moving forward.

Jackpot and Skins Events Prove to be the Key to Winning

Going into the 2020 ISL season, we all knew that the skins races would play a huge role in the overall results of the meets as they did last year. However, one of the League’s newest twists, jackpot times, proved to be one of the biggest game changers within the meet. In the end, jackpots turn out to be almost the only thing that matters- wins without stealing points are hardly wins at all in the greater scheme.

Throughout the weekend, only three individual events did not include any jackpoint point steals: the women’s 100 butterfly, the men’s 200 backstroke, and the men’s 200 freestyle.

The jackpot point advantage was especially prevalent in the skins races, where winners Lily King and Ryan Murphy scored 50 and 58 points, respectively. With their victories, each swimmer managed to score more points than a relay victory would have for their team.

On day one of the match, Caeleb Dressel finished second in both of his individual events: the 100 butterfly and 50 freestyle, which created a slew of questions and concerns about his form going into the season.

Today, Dressel quieted the rumblings by winning all three of his individual events. Beginning with the 100, Dressel posted a 45.87 to best Florent Manaudou by .3. He later dominated the 50 butterfly, once again beating Manaudou by .3, touching in a time of 22.46. However, Dressel’s best win of the day came in the 100 IM, an event which he has not swam at an international competition before. Going against a tight field that included World Champion Michael Andrew, Dressel surged over the final 50 meters to finish first in a time of 51.36, which was over a half second ahead of second place.

Siobhan Haughey and Benedetta Pilato are the Real Deal

Many of SwimSwam’s readers already know about Siobhan Haughey and Benedetta Pilato. However, over the course of the weekend, both have showed that they have something special in them, keeping up with the best in the world.

At only 15, Pilato managed to break 2 Italian records this weekend, coming in second to World Record holder Lily King in both the 100 and 50 breaststroke. In the later of the two events, she also set a WJR, touching in 28.97 to get under the 29-second barrier for the first time in her career. Already a World Championships silver medalist, Pilato will definitely be one to watch throughout this ISL season and in Tokyo, especially considering her rapid improvement rate.

Haughey, who was the D.C. Trident’s MVP last season decided to sign with Energy Standard this year. The move was extremely valuable for Energy Standard, as Haughey won the 200 freestyle and finished 2nd in the 100 freestyle to teammate Sarah Sjostrom. In both of her swims, she managed to set Asian records, breaking her own 200 mark from last season and shattering Rikako Ikee’s 100 freestyle record.

On Saturday, the LA Current pulled off one of the biggest upsets of the meet, winning the men’s 400 medley relay, which meant the team would be selecting the stroke for Sunday’s skins races. With World Record holder Ryan Murphy on their squad, the current decided to select backstroke.

However, when it got down to the skins battle, nothing worked for Energy Standard. Rylov and Grevers swam in the first round of the skins race and neither progressed beyond that. Additionally, both managed to have their points stolen by Murphy, which sealed the victory for the Cali Condors.

With an entire season to go, Energy Standard has to figure out its situation in the backstroke events, as the skins situation will most likely pop up again in the future.

Beata Nelson may be the Most Valuable NCAA Addition

One the the best NCAA swimmers in history, Wisconsin’s Beta Nelson had shown a lot of potential on the international stage. However, she has never managed to find her rhythm in the long course pool. Joining the ISL seemed to be the perfect opportunity for her to show her full potential to the rest of the world, especially given the short course meters format. Nelson, who signed with the Cali Condors has lived up to her hype. Despite not winning any individual events this weekend, Nelson posted two second place finishes.

Yesterday, Nelson was just out-touched by World Champion Emily Seebohm in the 200 backstroke, but she still managed to post a very impressive time of 2:02.99. This was a foreshadowing of her performance today, where she finished 2nd behind teammate Olivia Smoliga in the 100 backstroke in a time of 56.29. Under both circumstances, she managed to keep up with some of the best backstrokers in the world, and Nelson still has room to improve in the SCM pool due to her unfamiliarity with it.

Didn’t Lily score 50 points in the skins ? According to your earlier article on MVPs?

skins points count for half towards MVP rankings, maybe thats why there is confusion there

If you watched the first match you’ll agree!