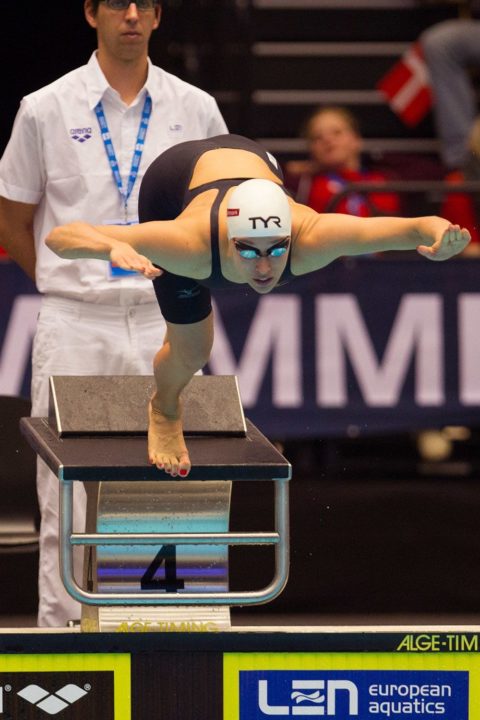 Rikke Moller Pedersen took a run at her own record winning the event in a time of 2:19.94... Current photo via Jesper Nielsen | www.sttfoto.dk

On the third night of the Danish Open 200 breaststroke world record holder Rikke Moller Pedersen of Denmark took a run at her own record winning the event in a time of 2:19.94. Pedersen posted a 2:19.11 in the semi-final of the World Championships last summer.

This is extremely impressive considering that her coach Shannon Rollason told SwimSwam before the meet that Pedersen was not rested and was focusing on the Swim Cup in Eindhoven in two weeks time.

She also separated herself from the rest of the world beating the current number one time of 2:22.46 recorded by Kanako Watanabe of Japan.

In the final she one upped herself winning the event in a time of 27.96, breaking her newly set Nordic record and tying her with Aliaksandra Herasimenia for third in the world rankings.

For Nielsen that is over a half second improvement on the year so far, it looks she has put her injury woes behind her.

Blume’s time places her third in the current world rankings with only Australian Cate Campbell (53.08) and Sarah Sjostrom of Sweden (53.65) ahead of her. It is also a lifetime best, beating her previous time of 54.06, which she recorded at this meet in 2012.

This is a season’s best for Ottesen, putting up a time that ties her with Fran Halsall of Great Britain for the seventh spot in the world rankings (taking Blume’s time into consideration).

Louise Hansson finished third in a time of 54.98.

Lotte Friis recorded her best time of the season in the women’s 1500 freestyle winning the event in a time of 16:31.45, placing her sixth in the current world rankings

It was a battle for the top spot in the men’s 200 freestyle with the top three athletes separated by only two tenths of a second. Going into the final 50 meters Daniel Skaaning led Daniel Steen Andersen by over a second and Mads Glaesner by over two, but both men made a run in the final 50 meters.

Wow! RMP very close to her world record!
And great 53.69 for Pernille Blume in the 100 free.
Ok. Now it’s sure that Denmark is the biggest threat to USA in the medley relay in the next 2 years, as long as Australia hasn’t a fast breaststroker. Perhaps Taylor McKeown is their hopeful. We’ll see what she can do next week. To come back to Denmark, with Mie Nielsen RMP, Jeanette Ottesen and Pernille Blume, they have now a complete team.

I remember you were saying all along that Russia will be USA’s closest competition in w4x100 medley.

Why made you change your prediction?

Only because Russia doesn’t have Efimova anymore.
I don’t know.
Is she suspended?
She should have at least 2 years of suspension.
On the other hand, she could be in Rio.

Denamrk being able to beat US in swimming is something I never even imagined in my life.

I haven’t said Denmark would beat USA in that relay. I said that Denmark will be perhaps the biggestv threat. But on paper USA remains the big favorite. They have now Simone Manuel on freestyle!
The big question is Australia. If in 2016 they have a breaststroker in 1.05/1.06, they will be very dangerous.

SÅDAN PIGER! Some great swimming from our Danish girls this week, so many good performances I’m not sure which has impressed me most. Mie continues to go from strength to strength, she’s ready for a big big year after having to sit out the world championships, and more importantly it looks like she has definitely put her injury woes behind her. It will be exciting to see how she progresses. Pernille beating Jeanette is a quite a great surprise, and she’s close to the Danish record. It’s particularly impressive given that Pernille is very small for a sprint freestyler. She swims a bit like Morozov with very straight arms. A really important moment for her I think, although she will… Read more »