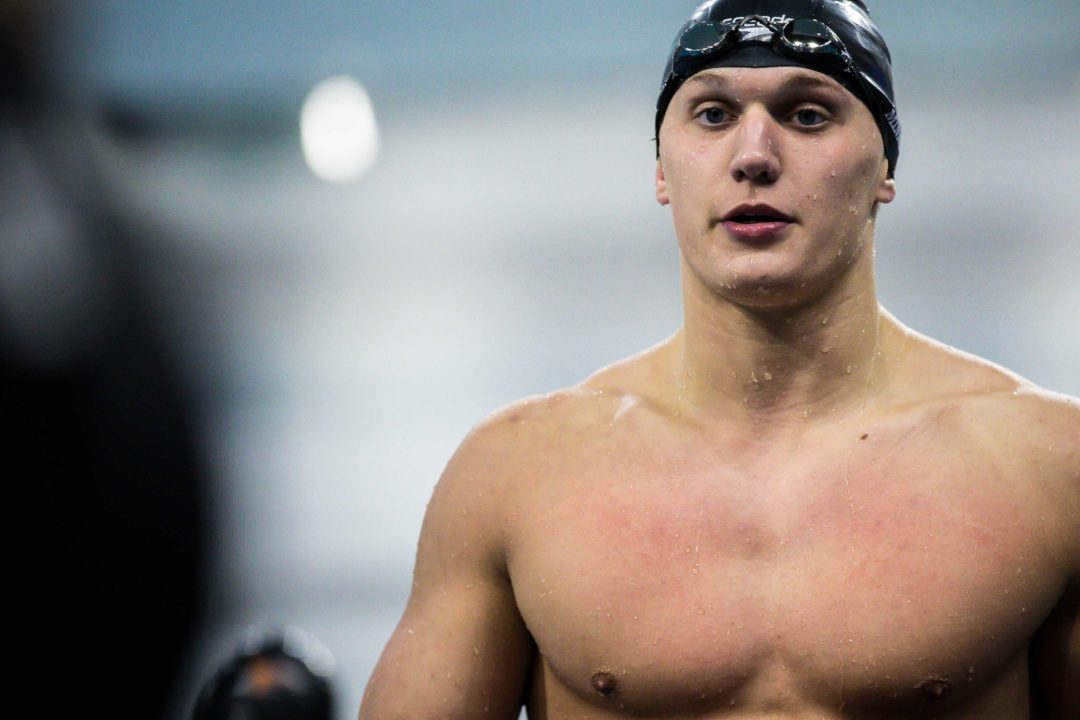 By the 2021 NCAA Championships, the Big Ten will most likely have the lion's share of 22-second breast splits as a conference. Current photo via Jack Spitser/Spitser Photography

Besides McHugh’s impressive split, the Big Ten’s breaststroke depth really shone through tonight. After McHugh was the only sub-23 in the field at this meet last year (22.99), this year, four men turned in 22-plus breaststroke splits. Other sub-23 splits included Michigan’s Will Chan (22.67), Purdue’s Trent Pellini (22.82) and Ohio State’s Hudson McDaniel (22.97). Chan now ranks #4 all-time and Pellini eighth.

At the ACC Championships and SEC Championships, there was one 22-point breast leg, each: Louisville’s Evgenii Somov (22.91) at ACCs and Tennessee’s Michael Houlie (22.77) at SECs. There were none at Big 12s, while Pac-12s are running the 200 medley later this evening. By NCAAs, though, the Big Ten will most likely have the lion’s share of 22-second breast splits as a conference.

Looking back to the 2019 NCAA Championships, which is the last NCAA Championships since the 2020 meet was canceled due to the pandemic, only USC’s Carsten Vissering split under 23 in the 200 medley relay finals. Now, with at least six 22-point legs (and probably more after Pac-12s) going into NCAAs, it’s looking like a 23-low split on a medley relay is no longer an edge.

Tonight, Michigan looked dominant, winning the 200 medley by almost a full second and the 800 free relay by over a second. Take a look at the relay split performances below, sectioned by medley leg and then illustrating 800 free relay splits at the bottom.

Ohio State led the way with the top two 800 free relay legs, including lead-off Paul Delakis at 1:31.90, a new lifetime best as he looks to be the 200 free favorite. The Buckeyes also had the best medley anchor with Sem Andreis‘s 18.43, while Michigan’s River Wright posted the field’s best fly leg with a blazing 19.88.

It seems like having the lanes open in between relays is making a huge difference for the men. Especially for the 200 FR and 200 Medley Relays.