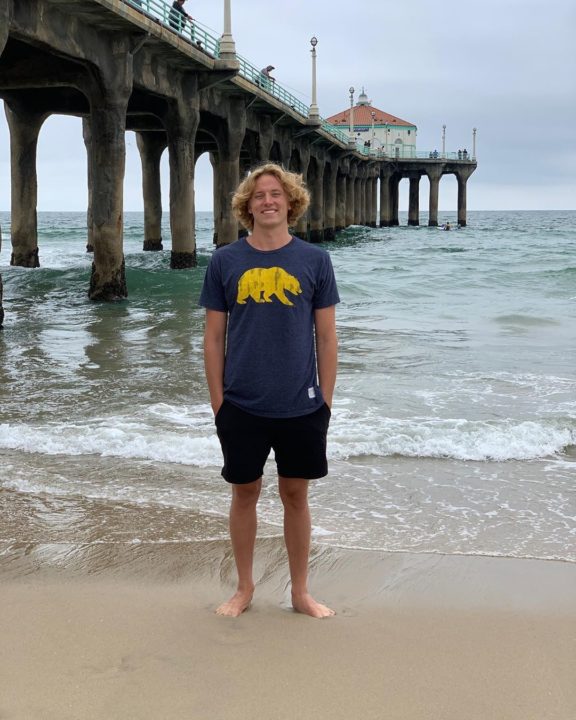 At the 2020 Big Ten Championships, Bathurst made the 200 fly A-final and placed eighth overall, while adding B-final appearances in the 200 and 500 free. Current photo via Kai Bathurst

Gallant finished fifth in the mile at the 2020 Big Ten Championships as a freshman, while Karl scored in multiple events in 2019 and 2020.

After one season with the Indiana Hoosiers, California native Kai Bathurst has announced his transfer to the University of California, Berkeley. He should have three years of eligibility remaining with the Golden Bears.

I’m super stoked to announce my transfer to swim at the University of California, Berkeley. I wanna thank all my coaches, friends and family that helped me get here. Go bears!🐻💛💙

On June 14, SwimSwam reported on Bathurst entering the NCAA transfer portal alongside Andrew Couchon, a rising junior who has yet to announce his post-IU plans. You can read about the recent IU departures here.

Bathurst dropped over four seconds in the 200 fly and over three in the 500 free in his one season with the Hoosiers. He also made small improvements in the 100 and 200 free. At the 2020 Big Ten Championships, Bathurst made the 200 fly A-final and placed eighth overall, while adding B-final appearances in the 200 and 500 free. Bathurst ended the 2019-20 season ranked third on IU’s roster in all three events that he swam at the Big Ten Championships, although he didn’t swim on any relays at that meet.

Prior to IU, Bathurst trained with Beach Cities Swimming and swam for Mira Costa High School in Los Angeles County. He was the 2019 CIF Southern Section Division 2 champion in the 200 free.

Cal is bringing in the SwimSwam-ranked #4 class in the country, and Bathurst’s addition alongside that class with strengthen the Bears’ depth.

I’m super stoked to announce my transfer to swim at the University of California, Berkeley. I wanna thank all my coaches, friends and family that helped me get here. Go bears!🐻💛💙

another day another transfer. i do not understand why people go to indiana.

This isn’t really ‘another transfer.’ A previous report was about Kai in the transfer portal. This is just the follow up now that he’s decided where he’s going.

Not every single swimmer who goes to IU transfers! There is a small percentage of swimmers in the NCAA who find IU to be the right program for them and stay there.

And an increasingly small percentage of swimmers at IU who find IU to be the right program and stay there!

Big get for Cal, especially with Quah graduating.
Wonder where the other transfer chips, from IU, will go? Didn’t they have a pretty fast breaststroker also enter the transfer portal, but not commit anywhere, yet?

He is another body but I’m not sure he is a “big get”. How much does he have to drop to score at NCAA’s?

Ya, I misread his comment. Bathurst is still scoring big conference points… he’s a great piece to add.

True but I think you have to look at the improvement curve of other 2fky guys who got to cal. Trenton came in as a 1:45 from hs and has dropped to 1:40. Plus that training group must be a real motivator as well with seliskar, Hugo and Quah