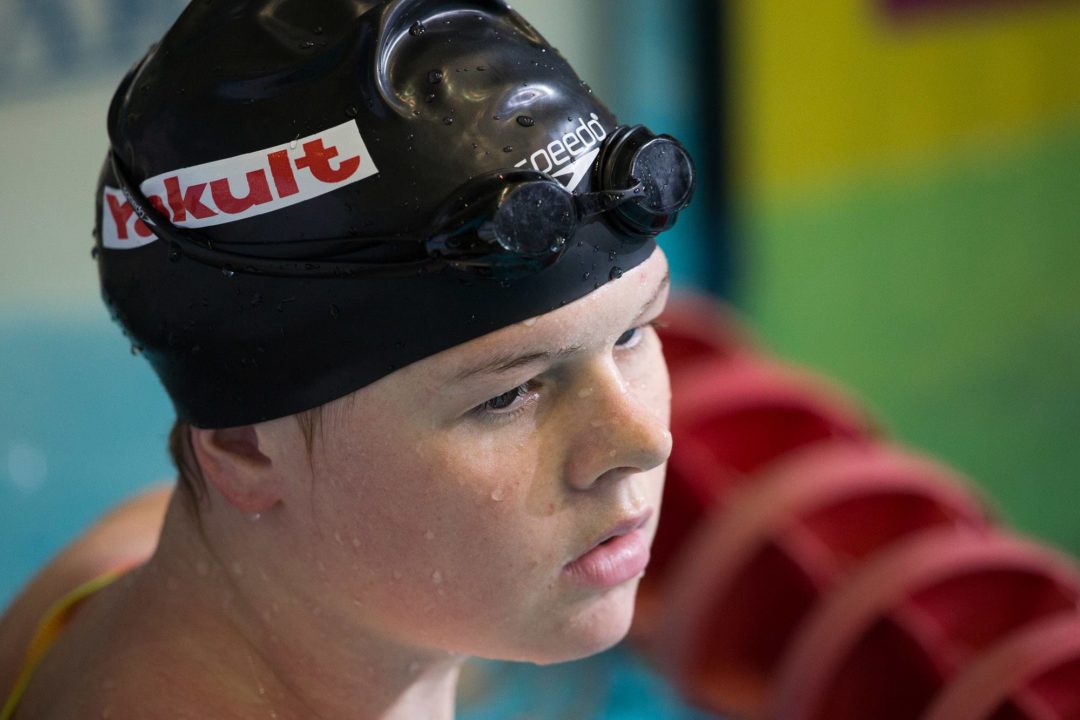 Becca Mann, above, is spending the week with the Andrew family in Kansas and training USRPT style. See what she thought of her first Indie Swimming workout. Current photo via Tim Binning/TheSwimPictures.com

This creamy, tangy and nutritious pasta is perfect for any weeknight dinner.

Becca Mann, one of the toughest and best junior swimmers in the world, will be spending this week living and training with Michael Andrew, one of the best male 14-year old swimmers in the world, and his family at their home near Lawrence, Kansas, and will share her experiences with us. Becca, who trains in Clearwater, Florida under Randy Reese, was a member of the 2013 U.S. World Championship team after finishing 2nd in both the 5km and 10km at last year’s National Championships, and placed 8th in both the 5km and 10km race in Barcelona. In 2012, at the U.S. Olympic Trials, the then-14-year old Mann qualified for finals in the 400 free, the 800 free, and the 400 IM.

This week I have the privilege to stay with the Andrew family, the family of Michael Andrew. I’m going to share my experience with SwimSwam for the next few days. The Andrews are such good-natured, down to earth people and I’ve really enjoyed my first day!
Michael and Michaela train two times a day, each stroke race pace (with the exception of the warm up). They swim in their awesome 28 meter backyard pool but don’t worry, they have a FINIS Turnmaster Pro so they can train both SCM and SCY.
I was only here for the afternoon practice. It was breast and free today. For those of you who aren’t familiar, Michael does USRPT. He trains completely race specific. Since he’s human, Michael continues his sets until he “fails”. A “fail” means that you haven’t hit your pace after holding it for a certain amount of time. When Michael “fails”, he takes an extra 45 seconds rest. After he “fails” three times, Michael either changes to a shorter distance of the same stroke or a different stroke altogether.
The first set of the practice is the most important set for him because he isn’t yet dealing with fatigue. He can give it his absolute all. It’s important that he holds nothing back because that’s when he’s at his very best. Also, it’s a great way for him to compare his times from previous first sets since he can see how much he’s improved.

The Andrews’ only dryland is in the summer when they go wakeboarding. They don’t focus on dryland because they believe that it’s not specific to swimming. However, they do have rings across the ceiling over their pool. Michael demonstated for me, easily swinging across the length of the pool. I made it to the first ring on my first try, and the second ring on my other tries. My goal is to make it to the flags (the first set, in case you were wondering) before I leave.
Tomorrow I’m going to Understanding and Implementing USRPT: A Two Day Seminar For Coaches And Swimmers. I’m going to be blogging with information from the seminar. Also, tomorrow I’m going to answer a few questions from the comments section, so please be sure to post yours!

What were the pace times you used for the 25s br, 50s fr, and 25s fr? You provided this info for the 50s br.
Thanks for doing this – it is very informative.

Also, was this in yards or meters?

And thank you for the blog. It’s a very interesting training style that I think makes a lot of sense.

I doubt it was meters; I mean holding 26’s and 25’s 50 free’s in a meter pool IN practice just doesn’t seem possible.

The times were yards or meters?

Does Michaela shout out times, or do you monitor your own via pace clock?