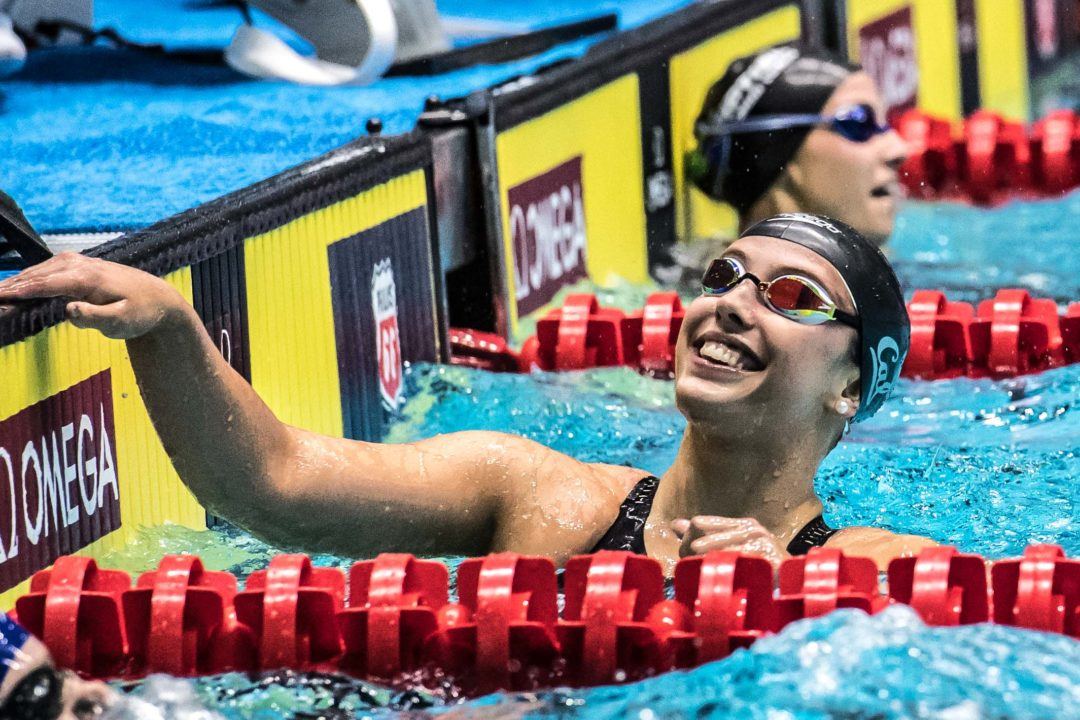 Cal's Kathleen Baker and Amy Bilquist put on a show in the 100 back, flipping in almost identical splits at the 50 before Baker pulled ahead for the win. Archive photo via Mike Lewis/Ola Vista Photography

The NC State Wolfpack made the trip to Berkeley on Saturday for a women’s dual meet against the Cal Golden Bears. The Bears, who were celebrating Head Coach Teri McKeever’s 25th year of leading the program, beat the Wolfpack by over 50 points.

NCAA champion Kathleen Baker led the charge for Cal, winning 3 individual events. She went up against fellow Cal All-American Amy Bilquist in the 100 back. They flipped in almost identical splits at the 50, 25.83 to 25.84, but Baker reached slightly ahead in the closing yards, winning in 52.92 to Bilquist’s 53.13. She swept the backstrokes, winning the 200 back as well with a 1:55.68.

Baker’s final victory came in the 200 IM, where she built a steady lead over freshman teammate Sarah Darcel (2:00.78). She was 2 seconds ahead, but Darcel charged home in 28.39 to try and close the gap. Darcel wasn’t able to run her down, though, as Baker still held a sizeable lead at the finish in 1:59.25.

Sprint star Abbey Weitzeil won her signature events for the Bears, first taking on NC State’s ACC Champion Ky-Lee Perry in the 50 free, touching in 22.40 to clip Perry (22.51) by a tenth. They battled again in the 100 free, with Weitzeil taking a slight lead up front and extending it through the back half to beat Perry 49.12 to 49.56.

BERKELEY – On a day when Cal knocked off North Carolina State in a morning dual meet, the results took a backseat to what followed the competition. In a room just off the deck at Legends Aquatic Center, more than 200 alumnae, current Golden Bears and friends of Cal women’s swimming & diving celebrated head coach Teri McKeever and her 25 years leading the program.

Director of Athletics Mike Williams, Chancellor Carol Christ, swimming alums Caitlin Leverenz Smith and Dana Vollmer, and former assistant coach Kathie Wickstrand all noted the accomplishments and impact McKeever has made on the Cal program, and swimming overall, during her long career.

“I’ve been so incredibly blessed – all of us have – to have had such an amazing role model in our lives,” Vollmer said. “I’ve learned so much. The quality I admire most is that I truly feel that Teri cares about each individual woman more than their times in the pool.”

Perhaps the highlight came when donor Michael Go announced the formation of the Teri McKeever Scholarship, which will be awarded to a deserving women’s swimmer beginning with the 2018-19 school year.

“I really don’t have words,” McKeever said. “More than anything, I just want to say thank you. I feel so fortunate, the older I get, of the environment I grew up in where that drive for excellence and being your best and challenging yourself is rooted in all of us. To look around the room and see people that are just starting their journey and people that are 20 years beyond their journey and have their own kids … it’s really hard to put into words. I’ve been able to achieve everything I’ve wanted in my life and more.”

At the meet itself, junior Kathleen Baker won the 100-yard back, the 200-yard back and the 200-yard individual medley to lead Cal to a 176-124 victory over NC State. Baker is the reigning NCAA champion in each of those races.

In addition, Abbey Weitzeil captured the 50 and 100 free, while freshman Briana Thai earned victories on both diving boards.

Now 3-0 on the year, Cal next hosts Nevada on Nov. 17 at Spieker Aquatics Center.

BERKELEY, Calif. – Despite dropping its dual to No. 7 California, the No. 13 NC State women’s swimming & diving team was able to leave the Legends Aquatic Center with many positives on Saturday. Having only a short turnaround from its meet the previous night at No. 1 Stanford, senior Hannah Moore led way winning both the 1000 and 500 freestyles while freshman Julia Poole continued to emerge as a rising star as she won the 200 breaststroke for a Wolfpack team that gained valuable experience competing under adverse conditions.

Quoting the Coaches
Swimming
“Overall a pretty productive day,” articulated head coach Braden Holloway. “The competition was closer with Cal and the objective of coming over here was to put our women in a tough situation against great competition, to get them to understand adversity and how to compete through that. I think today was a lot more challenging with keeping warm with the cold weather and trying to manage another quick meet. Since there are no men the meet goes so much quicker. We struggled a little bit with the cold and how to deal with that but they kept fighting; we had some pretty great performances. Hannah Moore had another big day for us, Julia Poole had a great day, Ky-lee Perry had a great day, Elise Haan had some great performances. Some of our young up-and-comers like Kathleen Moore are emerging. I know the divers had to really go up against some tough elements going up on that board in that cold wind. I think Lexie Lupton continues to really rise in our program. Having a lot of ladies get up and race some Olympians; there was a silver medalist and a lot of other Olympians in the pool today for Cal. I was happy to see us not back down and get after them; the first part of the meet was a little bit of back-and-forth then they got on a little streak and built a little bit of a lead that we weren’t able to come back from but this is what we’re going to have to do if we’re going to continue to get better. We have a young team; we have a lot of freshmen on this trip who are still trying to figure stuff out. They had a little bit of a tough time today and we’ve got to get better in that area. They’ve got to get better, they’ve got to learn and they’ve got to keep trying to improve. They’ve got to learn about their bodies and learn about where they are so we can continue to improve. Overall, I think there were some bright spots for us; our distance ladies were pretty big for us today. We knew that was an area we might be able to get some good results. Coming out of the gates we lost that first relay. We then came back with a one-two-three in the 1000 freestyle and that was big for our women. We just kind of ran out of gas a little bit and didn’t have an answer for some of the talent they threw at us. I’m proud they didn’t put their head down and shy away; they kept fighting and I think we can continue to improve as a program and learn how we can get better at performing on a day-to-day basis.”

Diving
“Considering the climate, I’m pleased with the results,” said diving coach Yahya Radman. “The girls were one or two details away from winning both boards. Madeline was consistently solid in her execution and process with better confidence. Rachel showed what she was capable of and impressed. She would be a contender at the highest levels if she got out of her own way.”

Wolfpack Relays
The team of Elise Haan, Julia Poole, Krista Duffield and Ky-lee Perry finished the 200-yard medley relay in 1:40.69 seconds which earned them second; they narrowly trailed the winning team from California who posted a time of 1:40.08 seconds.

Haan and Perry teamed with Vasiliki Baka and Lexie Lupton in the 400 freestyle relay and finished second in 3:21.75 seconds.

The 500 freestyle also saw dominance from NC State with Hannah Moore finishing first in 4:47.82 seconds and Holub finishing second in 4:51.14 seconds. Moore also made an impact in the 200 butterfly, touching the wall in 2:02.00 seconds which earned herself third.

Julia Poole‘s reputation as one of college swimming’s rising stars continued to grow; she won the 200 breaststroke with an NCAA ‘B’ qualifying time of 2:15.95 seconds. Lindsay Morrow was also impressive for the Wolfpack as she finished third in 2:18.12 seconds.

Perry continued to show why she was last season’s ACC Freshman of the Year as she finished second in both the 50 and 100 freestyle. Her times of 22.51 and 49.56 were both NCAA ‘B’ standard qualifying times.

Poole and Lupton were also impressive in the 200 freestyle as they took second and third thanks to their times of 1:48.44 seconds and 1:49.34 seconds respectively.

Elise Haan continued to shine in the backstroke events; she finished third in the 100 with an NCAA ‘B’ standard qualifying time of 53.59. She also finished second in the 200 backstroke thanks to another NCAA ‘B’ cut of 1:55.68 seconds. Lupton trailed her, as her time of 1:59.82 earned third.

The 100 breaststroke also saw NC State among the top-finishers with Lindsay Morrow and Olga Lapteva finishing second and third. They completed the race in 1:04.33 seconds and 1:04.75 seconds respectively.

Duffield finished second in the 100 butterfly, completing the race in 54.51.

Weitzeil looking a lot better and McLaughlin no longer looks like she’s dying the last 100.

Alot better than what? Last year both girls were faster in dual meets than the times they have posted. Looking at times 2 years ago in Oct, Weitzeil and Katie were faster as well. Im unimpressed with Cal women as they continually do a substandard job with superior talent.

Then what about Stanford? Ledecky was a lot faster before college swimming…

A lot better than what they showed end of last short course season and the summer. Not saying their times are ideal, but it’s in the right direction.

yes Weitzeil is looking good. Still not sold on McLaughlin, 200 time was ok

typical, I say something negative about a swimmer and the down votes come pouring in. A 1:58 is ok, not great.

its called progression ……so u are right