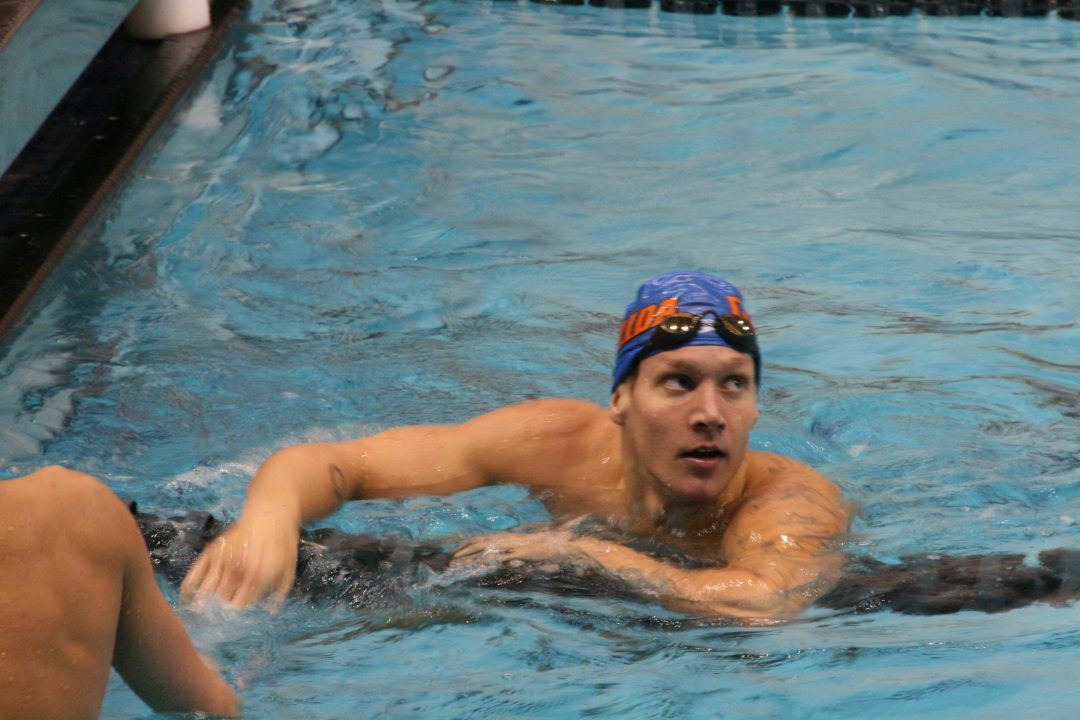 American Record holder Caeleb Dressel swept the men's sprints, putting up a blistering 19.21 in the 50 free and a 42.64 in the 100 free to outswim Auburn's Peter Holoda, who took 2nd in both events. Archive photo via Lauren Neidigh

The Auburn Tigers and Florida Gators met in Alabama for their dual meet matchup, with Auburn winning on the women’s side and Florida winning on the men’s side. American Record holder Caeleb Dressel swept the men’s sprints, putting up a blistering 19.21 in the 50 free and a 42.64 in the 100 free to outswim Auburn’s Peter Holoda, who took 2nd in both events. Dressel also collected a first place finish in the 100 fly, posting a 46.35 ahead of Auburn’s Luis Martinez (47.11).

“I thought the women were outstanding today,” Auburn head coach Brett Hawke said. “Both teams were ready to race. It’s just that part of the season where you’ve got some that are feeling great and others that aren’t and you just have to race through it. We’re coming up to a rest period before SECs but overall I’m happy with the quality of the efforts and the way the team is still coming together.”

“Patch has been such a consistent force for us over the four years and we are surely going to miss him,” Hawke said.

Patching then closed out his final dual meet with his fourth win this season in the 200 IM (1:46.19). The win was his 50th individual event win during his Auburn career.

“I had one last shot at being at home and one last dual meet ever so it was great to just experience that, embrace the team and embrace the atmosphere,” Patching said. “I was hoping for three wins but to go and execute it, and all the times were real good; I had a fight to the finish in the 200 IM but I stepped on the blocks before that race and said `this is your last opportunity at home, make the most of it.’ The pain really went away on that last 25 and I just kept my head down and got my hand on the wall.”

Neidigh did a distance sweep, winning the 1000 free (9:42.20) for the sixth time this season, and the first time ever against Florida, and the 500 free in a season-best 4:47.92, her fourth time winning it this season. It was the third time this season she swept the distance events in a dual meet, also doing it against Wisconsin and Alabama.

“Florida has a really strong distance program and I had never won a distance event against them before so it was nice to go out on a good note and finally get that win against some really tough girls,” Neidigh said. “These four years went by so fast. I don’t want it to be over but it’s great that we get to go out with the win and break it down one last time.”

“Aly Tetzloff really blew our minds in that 200 IM, she was amazing, and her 100 back was fantastic too,” Hawke said. “I thought the women overall really stepped up and performed.”

Auburn also swept the relay events in the women’s lanes. Tetzloff, Lloyd, Haley Black and Purcell went 1:40.17 to win the 200 medley relay while Erin Falconer, Meynen, Ellzey and Purcell went 3:21.29 to in the 400 free relay.

“Alison did a solid job on 1-meter and I was pleased with Miranda and scoring in her last dual meet,” Auburn diving coach Jeff Shaffer said. “We are giving too many dives away on the men’s side to really challenge for winning events.”

“We are still a work in progress,” Shaffer said. “We are still not competing at the level I know we can, and that’s frustrating and disappointing to see. In my point of view, athletes that should be continuing to push for personal bests and improving and the lack of consistency is a little off. We have three weeks to right the ship and be ready for SECs.”

Auburn now turns its attention to next month’s SEC Championships in Knoxville, Tenn. The meet begins on Tuesday, Feb. 14, with diving and a pair of relays and runs through Saturday, Feb. 18.

The women’s loss was just the first in the last four dual meetings with Auburn, while the men improve to 3-1 since the 2013-14 season.

Samuel Smith helped out the men on the springboard events, taking the 1-meter with 348.53 points (a season-high by .31) and the 3-meter with 388.20 points, his second-best turnout of the season.

Jan Switkowski rounded out the men’s individual wins, placing first in the 200 fly at 1:46.07.

The A-team of Jack Blyzinskyj, Chandler Bray, Switkowski and Dressel also teamed up to win the meet-opening 200 medley relay in 1:26.75.

On the women’s side, Florida swept both springboard events. Teya Syskakis won the 3-meter with a 295.35 score, while Brooke Madden collected the 1-meter title with a team- and season-best 305.03 score.

Sydney Sell had the lone Florida women’s win between the lane lines, placing first in the 200 back at 1:59.30. It was her second win in the event this month, having previously won at Miami.

TROY’S TAKE ON SWIMMING
“We got off to a really slow start for the women. We certainly would’ve liked to have scored a little bit better, but it was a good Auburn team and a lot of good races. We ran all the races – we just didn’t do as good a job in closing the deal. I’m really proud of the way they turned it around. The second half of the meet was much better. It certainly gives us a good feel for where we’re at and the things we have to work on in the next few weeks. We’ve got some freshmen who stepped up pretty well. Savanna Faulconer was good again. Kelly Fertel was really good. We saw some improvement in Tori Bindi. We just have a ways to go in what we need to work on.

“For the men, we jumped all over Auburn up front. We swam really well at the front half of the meet. We moved some things around lineup-wise. We wanted to see some different things. We saw a lot of things that will help us make decisions moving forward. Caeleb Dressel was outstanding. Maxime Rooney was especially good. We had a lot of guys do some special things. The breaststrokers improved a lot.”

GILLOOLY’S TAKE ON DIVING
“Overall, this was our best performance of the year. Each meet we are learning more about ourselves and making improvements. Auburn is a great team and SEC rival. This meet will really help our preparation for the SEC championships. We still have room to improve, but the potential is there. Winning all four events will definitely help our confidence for the final push this season. I am very proud of this group of athletes, their hard work and their contribution to the team.”

UP NEXT
Florida makes its much-awaited return to the Stephen C. O’Connell Center Natatorium on Saturday, Jan. 28, where it will face NR/No. 17 Tennessee at 10 a.m. The Gators will also honor their seven seniors in a ceremony prior to the meet.