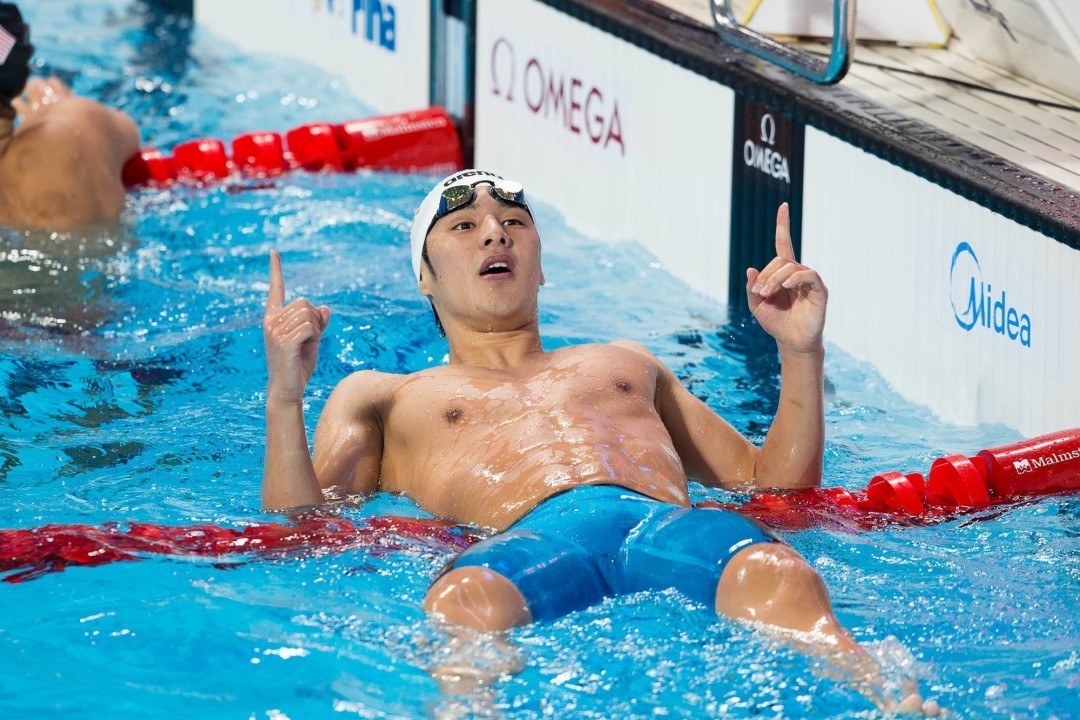 Japan's Daiya Seto had a breakthrough tonight with his performance in the 200 IM final at the 2019 FINA World Championships. Archive photo via Tim Binning/TheSwimPictures.com

Japan’s Daiya Seto had a breakthrough tonight with his performance in the 200 IM final at the 2019 FINA World Championships. Seto was up against defending champion Chase Kalisz of the USA, who was looking to extend the Americans’ winning streak in the event to 9 in a row. Seto was out a nail behind Switzerland’s Jeremy Desplanches through the fly leg, but took over the lead on backstroke and never gave it up. Kalisz made up a little ground in the end, but no one could catch Seto, as Japan snapped the USA’s winning streak with Seto’s 1:56.14.

It was a best time for Seto by half a second. And while Kosuke Hagino’s Japanese Record stands a second faster, Seto is in form to seriously challenge Hagino now that Hagino has decided to recommit to swimming ahead of Tokyo. He had been looking poised to make some big drops ahead of this meet after swimming lifetime bests this season ahead of the meet. Seto’s previous best was a 1:56.69 from April of this year.

When he won the race tonight, Seto earned his first major international gold since 2015 (excluding his 200 fly gold at Worlds in 2018, as it was in short course). His previous Worlds golds had come from the 400 IM, as he won back-to-back titles in 2013 and 2015. That event is yet to come at this meet. Since then, he had earned a bronze in the 400 IM at the Rio Olympics and 2 bronze medals (200 fly and 400 IM) at the 2017 World Championships. This is also his first ever major international medal in the 200 IM.

Also standing out for Asia tonight was China’s Ye Shiwen. Earlier in the meet, Ye cemented her comeback as she earned silver in the 200 IM. That was her first major international medal since 2012, when she swept the IMs at the London Olympics. Ye has already swum a lifetime best in the 200 breast this year and was at that point the fastest woman in the world for 2019. She qualified 5th for the final of the 200 breast, which will take place tomorrow night.

Japan’s Ippei Watanabe, the 200 breast World Record holder, will also compete in the 200 breast finals after qualifying 6th tonight. Australia’s Matthew Wilson tied Watanabe’s World Record in the semis, so Watanabe will be looking to reclaim that record as solely his. However, after watching Wilson’s semis swim, he’s in danger of losing the record altogether.

(Despite still looking boyish, Seto is married to Yuka Mabuchi and had a daughter Yuwa)

Seto has also earned a spot for Tokyo 2020! It is their rule that a gold medalist at FINA world a year prior to the Olympics earns a spot.

Nice! Now he can afford to have uninterrupted training and taper only for the Olympics. Watch out for him in 400 IM.

Great to see him break thru for gold!

Except that this is not his first world championships gold medal.

Yes. He got his spot this way for Rio in 4IM at FINA world 2015, and also did well at Japan Open. That was how Kanako Watanabe got her spot for Rio too. The rule is they can earn a spot this way, but still have to compete at Japan National (selection) in April. I read his biography book- it was very good that his friendship with Hagino and pushing each other since they were ten years old have helped him to get where he is. Also although he wanted a gold medal, receiving a bronze in Rio set a fire in him and made him feel he could do more.

But it was his first long course worlds gold in 4 years, which is still something exciting to see. 🙂