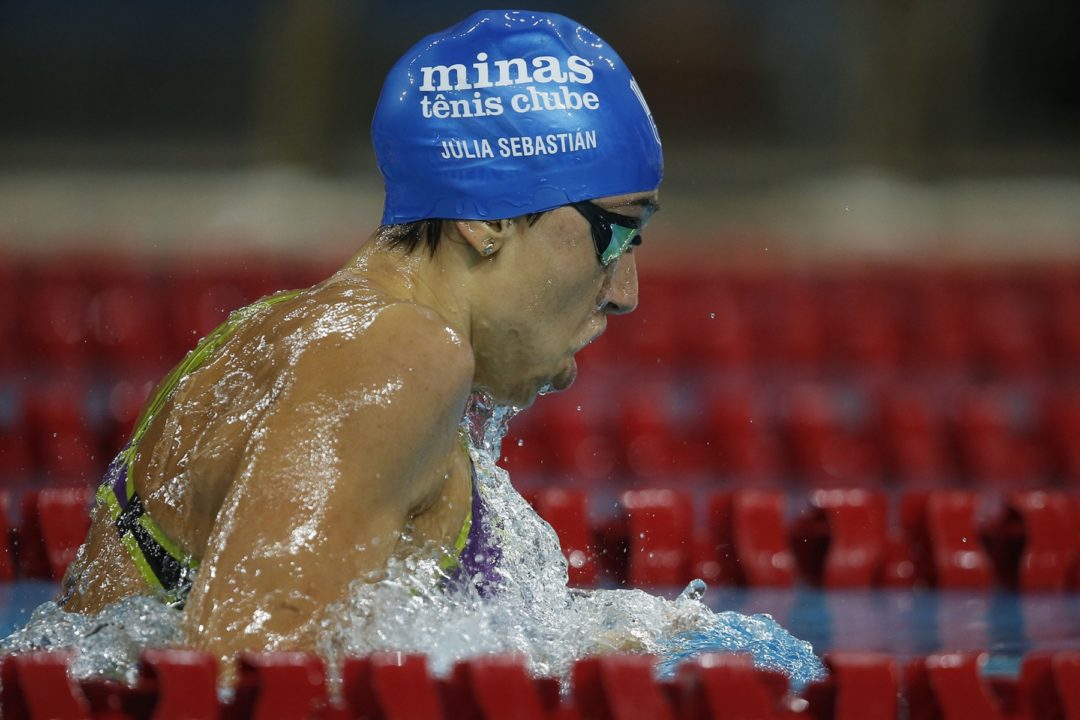 Sebastian lowered by .11 her own record of 2:21.31, which she broke Aug. 2018, while racing at that year's edition of the Jose Finkel Trophy in Brazil. Archive photo via Satiro Sodre/SS Press

The International Swimming League (ISL) continues to serve as a record-setting meet for many of the racing swimmers. Julia Sebastian of Argentina today broke her own South American record in the 200-meter breaststroke.

This time, the Los Angeles Current team member clocked a 2:21.20, to set a new short-course South American record. Sebastian lowered by .11 her own record of 2:21.31, which she broke Aug. 2018, while racing at that year’s edition of the Jose Finkel Trophy in Brazil.

On day 1 of match 3, with new franchises Tokyo Frog Kings and Toronto Titans as well as LA Current and Aqua Centurions on deck, Kelsey Wog (TOR) cleared the field in the 200-meter breaststroke in a time of 2:17.51, approximately 4 tenths of a second above Lilly King‘s best time this season.

Sebastian came in 5th adding 4 points to the scoreboard for LA Current, which adds to the 3 points earned by teammate Kierra Smith, who touched the wall in 6th place.

That same day, Sebastian also lowered her own record in the 50-meter breaststroke, notching a 30.52 shattering the prior Argentine record of 30.66 set by Sebastian herself last year.

In this case, Italy’s Martina Carraro (AQC) won the 50-meter breaststroke, becoming the only swimmer to dip under the 30-second mark after swimming a time of 29.66. In second place was Brazilian Jhennifer Conceicao, who holds the South American record in the event in a time of 30.00. Today, Conceicao clocked a time of 30.34.

Tomorrow Sunday will bring this third match of the 2020 ISL to a close. Sebastian is slated to swim the 100-meter breaststroke, where she could lower her own Argentine record and get closer to the South American record owned by Jhennifer Conceicao (1:05.69).

Below is a comparison of Sebastian’s splits at both ISL matches and the 2018 Jose Finkel Trophy: