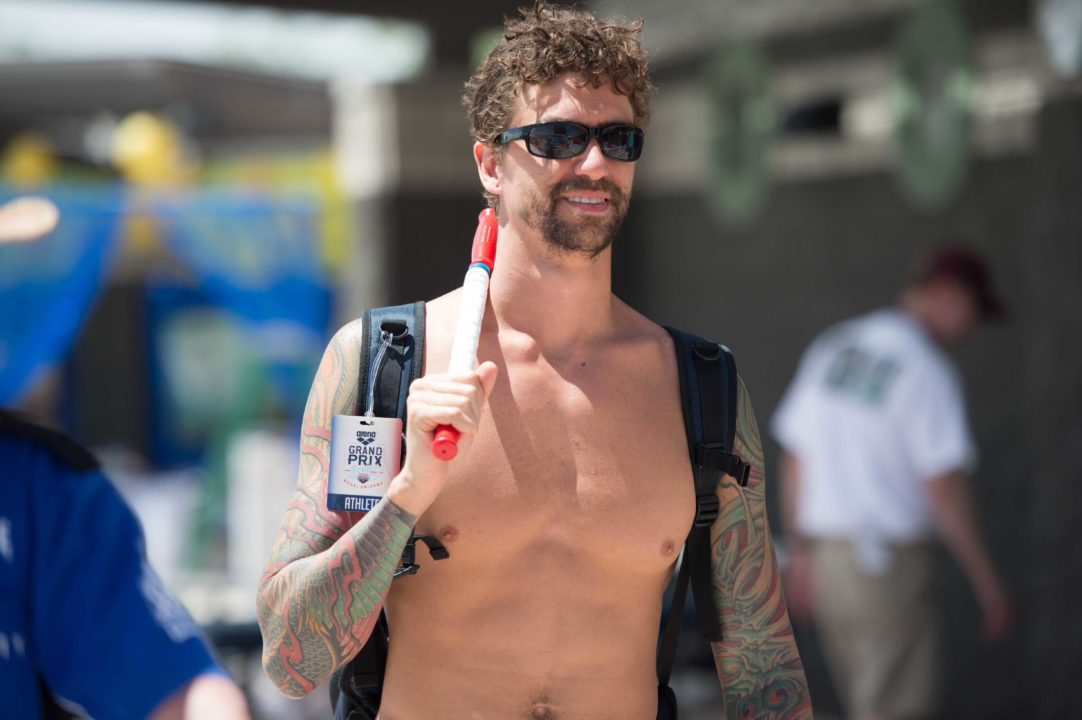 U.S. Olympian Anthony Ervin will be leaving his Cal-Berkeley training base and moving the Los Angeles to train with Dave Salo and the USC professional group for the year leading up to the 2016 Rio Olympic Games. Archive photo via Mike Lewis/Ola Vista Photography

U.S. Olympian Anthony Ervin will be leaving his Cal-Berkeley training base and moving the Los Angeles to train with Dave Salo and the USC professional group for the year leading up to the 2016 Rio Olympic Games.

Ervin announced the move in a press release Monday, noting that Southern California is his original home, and the area in which he grew up.

Ervin has generally trained out of the University of California, where he attended college and won an Olympic gold medal back in the year 2000. He retired at the age of 22 in 2003, but again trained at Cal when he made a career comeback in 2012 and once again made the U.S. Olympic team.

Long one of the coolest characters in swimming, Ervin – who earned an English degree from Cal – was true to form in the language of his press release:

“After 16 years, the time has come for me to return to the city of my birth, a journey home that I always knew I would make. I will always have the blue and gold of a California Golden Bear in my mind and in my heart, for Berkeley as a city and university has, with a liberal education, matured a wily teen into this 30-something adult.  I will always be grateful for the support of those personal relationships forged in Berkeley, and though I move forward, I will remain in touch with the friends, mentors, coaches, and teammates as we all continue to grow.  The time and place for structured learning has passed; and as the dusky twilight of my competitive career closes in on me, it is time to move forward into the wilds of life with my friends and family.”

Ervin is coming off of a disappointing summer that saw him fail to advance to the 50 free final at the World Championships and also swim a leg of the disastrous American 4×100 free relay that failed to make finals.

He’ll now join a Trojan professional group that is loaded with stars both national and international. Salo is well-known as a sprint coach, which should be an ideal fit for Ervin, a pure sprint specialist at the age of 34.

Ervin will swap longtime training partner Nathan Adrian for another elite sprinter in Vlad Morozov, a Russian superstar who is one of the better young sprinters worldwide.

I think it a muscle roller.

BOBO , if u watch well closely , u will see this photo was taken at a Grand Prix and most probably he was holding one of those pancards with a stick … not sure but it seems .

Talking about men’s sprint, Florent Manaudou, as expected, has announced he will double 50 free/100 free at next French national championships and wants to swim both events in Rio.

Well, the 100 is wide open, so why not. He just has to learn to show up for a final in that event at a big meet.

It was not a world meet but it was in LCM.

I think Anthony needs to go back into the ring, the cauldron that formed that former boxing …ummm .. swimming champ Gary Hall Jr : By neading to SprintLand Phoenix Swim Club,he can also learn to train with Miriam Sheehan.

Maybe the coach will be able to tell him which supplements work best for him.

He will also be training with Kenta Ito, Derek Toomey, Dylan Carter, and other Russian sprinters