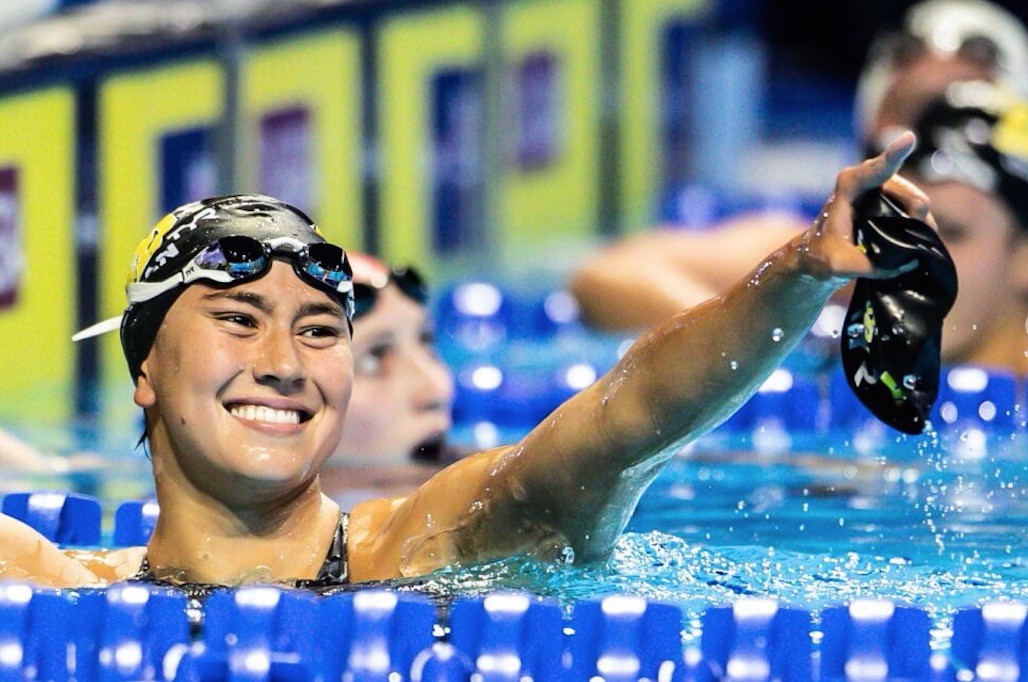 For the fourth year in a row, Erica Sullivan has equated each Best Picture nominee at the Oscars with a type of person in the swimming community. Archive photo via Jack Spitser/Spitser Photography

Olympic silver medalist Erica Sullivan has continued an annual tradition on Twitter upon the release of the 2022 Academy Award nominations. Every year, Erica Sullivan creates a thread listing each film nominated for Best Picture and likens each one to a type of person in the swimming community.

The 2023 Oscars, which will occur on March 12, 2023, will honour films released in 2022. In the lead-up to “awards season”, various films have been cited as front-runners for the Best Picture award, which is the most coveted award in the world of film.

Steven Spielberg’s semi-autobiographical family drama The Fablemans was an early contender after premiering at the Toronto International Film Fest. Everything Everywhere All at Once, a science fiction tale centering around an immigrant family has found a groundswell of support and led the nominations with 11 total. A third film that many believe to have a shot this year is Martin McDonagh’s The Banshees of Inisherin, which tells a story of a fractured friendship in a 1920’s Irish town.

“Front-runners” for the top prize, however, can lose momentum in the final countdown to the ceremony. Last year, Jane Campion’s The Power of the Dog was expected to win for months, but ultimately lost out to Sian Heder’s CODA after a late surge of support for that film. Any of this year’s 10 nominees for Best Picture could wind up winning on March 12th.

Without further ado, here are Erica Sullivan’s People in Swimming as the 2023 Oscar Best Picture Nominees:

People in Swimming as the 2023 Oscar Best Picture Nominees: A THREAD

Elvis (dir. Baz Lutherman)
The swimmer who’s good at competing and their swim coach is wayyyyy to involved in their life. pic.twitter.com/CTUNVKlLXO

The Fabelmans (dir. Steven Spielberg)
Those crazy swim families where every kid swims. One is like SUPER good though. pic.twitter.com/2gbE5KcYH9

Top Gun: Maverick (dir. Joseph Kolinski)
This is the swimmer who is a sprinter. Pure racer. Will go out a :45 in a 200 free. pic.twitter.com/B8xtzgoTIo

Women Talking (dir. Sarah Polley)
This is all of the fast wonderful women who lead the lane and don’t take shit! (Also can we get some hype for another female director nominated for best picture) pic.twitter.com/FVjUfH6bIf

After releasing her thread, SwimSwam’s own Yanyan Li requested a personalized movie comparison as someone who “can do everything related to swim besides actually swim.” Sullivan obliged and gave Yanyan Glass Onion: A Knives Out Mystery, which is Rian Johnson’s murder mystery sequel nominated this year for Best Adapted Screenplay. The comparison is apt, considering that the film centers Miles Bron who founded and runs a major tech company despite knowing very little about science.

If you do I’ll make sure it won’t flop

Check out Sullivan’s thread from the 2022 Oscars here.

Brilliant! Just brilliant. Thanks to Erica 😁👍🏼

Tar is definitely the swimmer who’s the best on the team, knows they’re the best and acts like it, and gets into several bad incidents.

Lol this was so accurate. She’s so funny.