Alabama Women Beat Auburn for the First Time Since 1996 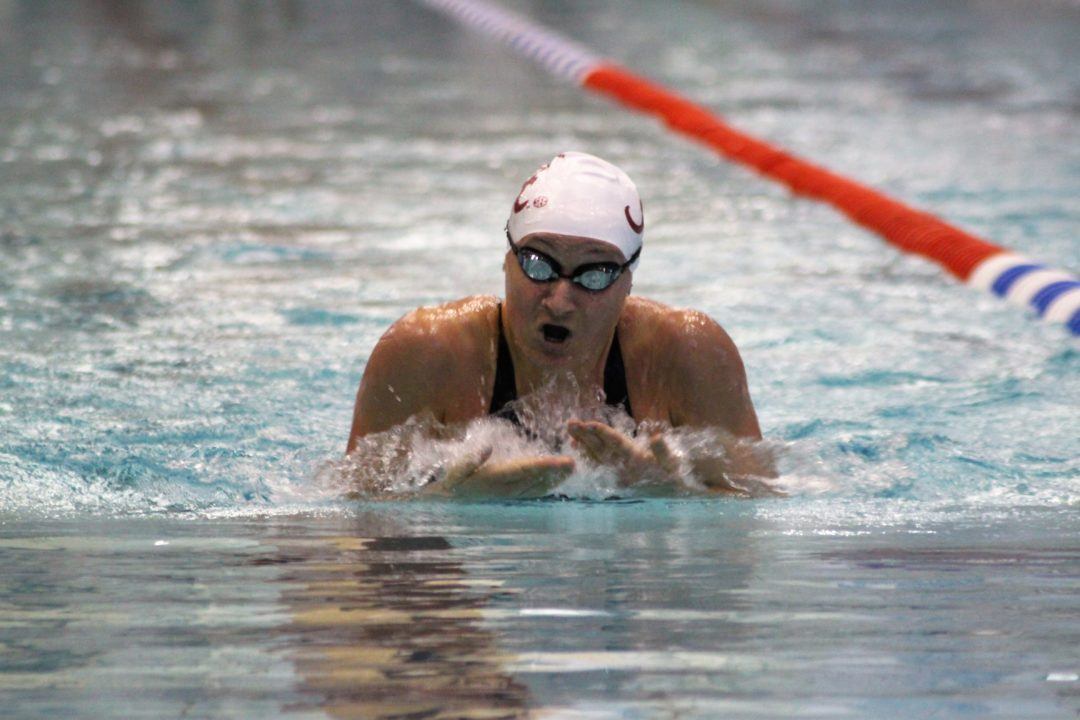 On Friday, the Tide traveled to SEC and in-state rival Auburn for dual meet action. The women were victorious, giving them their first dual meet victory over Auburn since 1996. On the men's side, however, Auburn prevailed. Archive photo via Andy Ringgold/Aringo Photography

This week in college swimming brought a highly anticipated SEC and in-state rivalry meet between the Auburn Tigers and Alabama Crimson Tide. On Friday, the Tide traveled to Auburn for dual meet action. The women were victorious, giving them their first dual meet victory over Auburn since 1996. On the men’s side, however, Auburn prevailed.

Senior captain Mia Nonnenberg, an All-American IM and distance freestyler, helped lead the Tide to their first victory against the Tigers in over 20 years with her individual performances in the 1000 free and 400 IM. In the 1000, she got them off to a good start to the meet, posting a 10:01.78 to lead a 1-2 finish with teammate Alexis Preski (10:03.40). She closed the session with a 4:13.23 in the 400 IM, finishing nearly 5 seconds ahead of the field.

Justine Macfarlane and Flora Molnar were also multiple individual event winners for Bama. Macfarlane popped off a 1:01.72 to win the 100 breast. She completed the breaststroke sweep in the 200 breast, leading from start to finish in 2:13.48. Freshman Molnar rocked a 22.41 in the 50 free to out-touch teammate Bailey Scott (22.61). She then went up against Auburn’s Aly Tetzloff (53.02) in the 100 fly, coming from behind to win by a fingernail in 53.00.

Among the event winners for Auburn were All-Americans Tetzloff and Julie Meynen. In the 100 back, Tetzloff was dominant, flipping in 25.79 en route to her winning time of 53.28. Meynen, on the other hand, took control of the 100 free, She was the only swimmer to break 50 seconds, touching in 49.92 ahead of Bama’s Temarie Tomley (50.42).

Teammate Luis Martinez contributed a pair of wins for the Tigers with his butterfly sweep. In the 200 fly, he trailed Alabama’s Will Freeman by half a second with 50 yards to go, but stayed steady coming home in 27.08 while Freeman faded. Martinez hit the wall in 1:46.61, followed by Freeman in 1:48.26. He returned for the 100 fly, running down Bama’s Laurent Bams (47.01) and Luke Kaliszak (47.16). Bams had the edge halfway through in 21.71, but Martinez pulled even going into the finish. They were separated by just a hundredth at the touch, with Martinez getting his hands there first in 47.00.

Alabama’s Kaliszak had impressive performances, starting with a blistering 21.19 50 back split on the Tide’s winning 200 medley relay. Later in the meet, he put up a season best 46.58 to dominate the 100 back. That’s the 3rd fastest time in the NCAA this season and the fastest time outside of the USA Swimming vs. College Challenge.

“I thought the whole men’s team stood up as a unit,” Auburn head coach Brett Hawke said. “I know there was some individual highlights but the way we won this was through team swimming. It’s clear that Alabama came in with a little bit different agenda than we had. We came to race tough and I thought our guys did that man-to-man.”

Luis Martinez, Hugo Gonzalez and Scott Lazeroff each picked up a pair of individual wins while Tommy Brewer, Peter Holoda and Bryan Lee each earned wins as well.

Martinez took the top spot in both butterfly events for the second straight weekend. He won the 200 fly in a season-best 1:46.61 and then made it a personal sweep of the fly events with a win by .01 seconds in the 100, touching in 47.00, seventh-fastest in the country to date.

Lazeroff swept the springboard events, taking home top honors twice as Auburn went 1-2-3 on the 3-meter with Lazeroff (363.83) taking first, Logan Andrews scoring a season-best 344.10 to take second and Pete Turnham finishing third (340.35). It was more of the same on the 1-meter as Lazeroff just beat out Turnham for first, scoring a 341.03 to Turnham’s 340.13, both of which are season-best scores.

“On the 3-meter we were real consistent,” diving coach Jeff Shaffer said. “Pete still needs to work on finishing his backs and gainers but he really had an awesome top on his inward three-and-a-half. It’s unbelievable that it’s been four years and this is his senior year. I’m proud of his efforts and what he’s done.

“Scott was real steady,” Shaffer said. “He actually did a new dive on 1-meter, a front one-and-a-half, three twists, and I think that will be a strong dive for him as the season goes on.”

“I think the Alabama women came in in a different spot than we are,” Hawke said. “I thought our women improved from last week in terms of racing tough and getting some wins.”

“The girls were rock solid,” Shaffer said. “Another personal best for Erin and another solid performance for Alison. She did some great dives, missed a couple of entries, but overall we are getting better. This is our third meet in a row with one more week to go. We get through that and maybe it will be time for some training to get better and focus on the mistakes that we made. I’m proud of what they did today.”

Aly Tetzloff, the reigning SEC Swimmer of the Week, remained undefeated in the 100 back this season, winning in a career-best 53.28. She just missed out on a second individual win, getting out-touched by .02 seconds in the 100 fly, finishing in 53.02, which is the fifth-fastest time in the country thus far.

Bailey Nero earned her first individual win of the season, winning the 200 fly in a NCAA B cut time of 1:59.16.

Julie Meynen, who had won every dual meet 100 free up until last weekend, returned to the top spot with a 49.92 to take top honors on Friday.

“Carly was a gem of a find in recruiting last year,” associate head coach Lauren Hancock said. “We knew we were getting a tough one in her and she will swim whatever we ask of her. She stepped up in breaststroke for us but she’s also got a good 200 fly, 200 free, 500 free and 400 IM. We are very pleased with her progress so far.”

Auburn hits the road for the first time this season next weekend, competing at South Carolina on Saturday, Nov. 4. The dual meet is set to begin at 10 a.m. CT in Columbia, S.C.

AUBURN, Ala. – The Alabama women’s swimming and diving team won eight of 14 individual events and both relays to earn its first victory over Auburn since 1996 at Auburn on Friday afternoon by a score of 167-131.

“This was as much fun as I’ve had in a dual meet in a long time,” UA head coach Dennis Pursley said. “It was absolutely a total team effort. Everyone got into it and fed off one another and really got after it. This is a big confidence boost for our women and brings a lot of credibility to the women’s program.”

“I could not be more pleased with both teams and where we are heading into November,” Pursley said. “I am really pleased with the intensity and passion they’ve brought to the meets, as well as the spirit and the racing. They’ve given it everything they’ve got and I couldn’t ask any more of them.”

The Tide women also won the opening and closing relays by healthy margins. Junior Katie Kelsoe, Macfarlane, Molnar and senior Bailey Scott combined to win the 200 medley relay in a tie of 1:38.59 while Molnar, senior Temarie Tomley, Kullmann and Scott won the 400 freestyle relay with a 3:19.01.

The men also swept the relays. Kaliszak, Bams, sophomore Christopher Staka and Howard combined for a 1:26.22 to win the 200 medley relay, while senior Christopher Reid, sophomore Zane Waddell, Howard and Bams won the 400 freestyle relay in a time of 2:53.61.

Alabama returns to action Nov. 16-18 at the Georgia Tech Invitational in Atlanta, Ga.

Coach Hawke needs to worry about doing his job… Alabama is obviously doing theirs. I know it must be tough to get steamrolled and know that Alabama is more talented but you have a lot of work to do Brett. BAMA has just gone by you and it isn’t even close. Time to coach you squad up COACH!

Coach Hawke would be better served by acknowledging Alabama’s victory versus the sour grapes he exhibited in his press conference. His lack of decorum is consistent with eye witness accounts that said he refused to walk over and congratulate the Alabama staff at the end of the meet.

Congrats to Alabama women. I think it is a joke that Auburn women are ranked 9th in the country. They shouldn’t even be top 20.

Here’s some other rankings that might make more sense to you.

I’ve always been a true war eagle fan but it’s great to see such a classy team like Alabama compete against our guys. Not many teams will give the winning team a good job chant. Auburn should pick up a thing or two from Alabama. Great job to both teams! War eagle

Yeah but Alabama women only scored a tragic 3 points at NCAAs last year. So, let’s not be surprised when Auburn throws down in the spring.. when it counts.

Good point! But I will counter that with the fact that the freshmen class who, by the nature of eligibility and the American school system did not participate in the 2017 championships, will in fact account for a point increase at the 2018 championships.

“Throws down,” their end season times are comparable with their in season tapors. I’m sure auburn women are shook from the loss, maybe it’ll teach them how to class up. Bama isn’t the only team who has had enough of their trash talk.

Let’s be fair, it’s not the swimmers talking trash, it’s their coaches.

It’s been a rough week for Bama’s developmental Breaststrokers. I expect them all to be splashing Tommy Brewer’s Lane at SECs with all under 1:54s.

Chris Staka coming into his own now… Connor Oslin took him bowling last week. Coincidence? There are none, grow up.

LouBams3 has the ugliest breast I’ve ever seen. Nice guy though! Good at swimming too