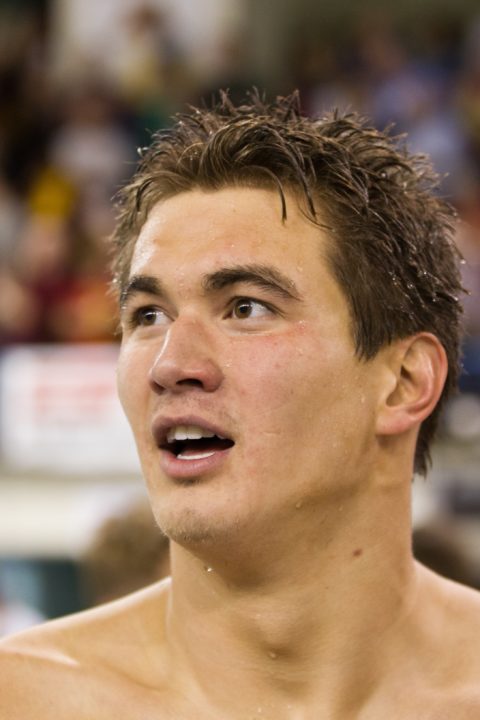 Nathan Adrian looked very good to take the top seed in the 100 free on morning 4 of the 2012 Olympics (Photo Courtesy: ©Tim Binning/TheSwimPictures.com)

The highlight of the prelims of day 4 at the 2012 London Olympics will be the beginning of the men’s 100 freestyle, where Australian James Magnussen looks to atone for a disappointing relay swim from earlier in the meet, and Brazil’s Cesar Cielo will make his debut at this meet: the last swimming superstar to kick off their quest for gold.

Full results are available here (with relay splits – PDF).
Live video stream via NBCOlympics.com (US Only).

A very slow couple of heats left the cutoff to make the semi-finals in this men’s 100 free at just a 48.99, and that’s a good thing for many of the biggest names, as they needed every tenth of that to slide in. That includes Yannick Agnel of France and James Roberts of Australia in 48.93, both of whom should be 47-second medal contenders. Agnel would say after the race that he “felt like a zombie” this morning, after a presumably late night following his win in the 200 free on Monday.

He was followed by former Auburn Tiger Gideon Louw, representing South Africa, in 48.29. Louw will push through, while his teammate Graeme Moore will not (49.29). Moore had a disappointing South African trials, and missed again here. The Netherlands’ Sebastiaan Vershuren was 2nd in 48.29, followed by a much-improved swim from James Magnussen, the world’s fastest this year, in 48.38. He looked much better than he did in the relay finals.

Canada’s Brett Hayden was next followed by a 6th-place tie between the Cayman Islands’ Brett Fraser and Belgium’s Pieter Timmers. The Belgian sprinters have been outstanding this meet – their 400 free relay was a surprise finalist.

Cullen Jones and Cesar Cielo were also through; Cielo, the master of the early-round slow play, was a 48.67.

Neither Italian swimmer will earn a 2nd swim, with former World Champion Filippo Magnini 19th in 49.18. Germany’s Marco di Carli doesn’t seem to have recovered from a bad trials, and was 18th in 49.03.

American Kathleen Hersey already looks in spectacular form in this women’s 200 fly after leading all prelims heats with a 2:06.41. That’s already more than a second better than she was at the Olympic Trials, and given her strength she should do well to continue fast swims through all three rounds.

The competition will be better, though, so she’ll have to keep fighting throughout the afternoon. The defending silver medalist, and 2011 World Champion, Jiao Liuyang of China sits 2nd in 2:07.15, followed by Britain’s Jemma Lowe in 2:07.6 and Hungary’s Katinka Hosszu, the NCAA Champion, in 2:07.7.

Lowe’s is one of the better swims we’ve seen from the Brits at this meet, though her teammate Ellen Gandy’s 2:09.92 was not: she was out fairly well through the 150, but was sunk by a 35.61 split on the last 50. That left her out of the final by six-tenths with a 2:09.92: four seconds from her season-best. Gandy is the defending World Championship silver medalist.

Other top qualifiers include Hungary’s Zsu Jakabos, having a breakout year, in 2:07.75 – just .04 back of her more accomplished teammate Hosszu.

Japan’s Natsumi Hoshi is the 6th seed in 2:08.04, though she won her heat. American Cammile Adams (2:08.18) and both Spaniards in similar times. China’s Liu Zige, the defending Olympic champion and World Record holder, was 11th in 2:08.72 – fairly pedestrian for her.

Aside from Gandy, there were no significant medal contenders to not make it through.

The Brits have finally put a charge into the home-town fan base, as Michael Jamieson (2:08.98) and Andrew Willis (2:09.33) took two of the top three seeds. With that, Jamieson blows-away his best time, and Willis ties his.

Willis lit up the arena when he topped two-time defending champion Kosuke Kitajima (2:09.43) in the final heat of the morning by a tenth as Kitajima glided to the wall, while Willis had a near-perfect finish.

Both men were upended, though, by Hungary’s Daniel Gyurta, who’s won just about everything since Beijing (including both World Championships). He will be the top seed in 2:08.71, and should be able to show-off his new-found top end speed a little bit more in the later rounds.

After the Brits came the Japanese, Ryo Tateishi (2:09.37) and the aforementioned Kitajima. It looks like Tateishi is holding things together pretty well on his second taper of the season: something he’s not always able to do. Those two swimmers are the two fastest in the world this year as well.

Next up were the Americans. Clark Burckle is the 6th seed in 2:09.55. He seems to have hit his taper perfectly, as that’s a best time and a second better than his swim from Trials. Weltz was juts after him in 2:09.67 to round out the swimmers under 2:10.

Lithuania’s Giedrius Titenis did pretty well with a 2:10.36, but swimming well in prelims hasn’t been his issue. Other swimmers of note include Luxembourg’s Lauren Carnol in 12th in 2:10.83, Canada’s Scott Dickens in a best time of 2:10.95, Brenton Rickard from Australia, and both of the Germans. Marco Koch barely snuck through in 16th. There won’t be any notable absences from the semi-finals.

The American men dominated the prelims of this 800 free relay, but that’s no big surprise given their far-superior depth in the 200 free. Their splits included:

That would seem as though the one vacancy in finals would be the spot of Florida Gator Conor Dwyer to lose, unless the American coaches are intending to use Peter Vanderkaay tonight. Both swimmers are coached by Olympic men’s head coach Gregg Troy. Initial indications are that it will be Dwyer’s spot, though we’re unlikely to hear official word until shortly before finals.

The United States ran away with this relay in 7:06.75, followed in 2nd by a French team that was without their best swimmer Yannick Agnel, the individual 200 champion. The best swim was Jeremy Stravius in a 1:47.42 leadoff. He has only relay swims this year, and after being left off of the finals group in the gold-medal winning 400 free relay, he all-but-assured himself of an evening race with that time. Clement Lefert, who was so good in the shorter race, was a 1:46.33, so he’ll definitely be deserving of a finals spot too.

Germany, using Paul Biedermann early as he’s done with individual racing, is 3rd in 7:09.23. Biedermann anchored in 1:45.6, and they also got a very strong 1:47.4 from American-trained Dimitri Colupaev on the 2nd leg.

Australia, a balanced Great Britain lineup, China, South Africa, and Hungary will round out the top 8. China should have one big change to make by putting Sun Yang on this relay in the final, which would improve their time by three seconds or so.

Hungary was led-off by an outstanding 1:47.23 from Dominik Kozma, the fastest leadoff of the field. He scratched the 100 free, as the National Record holder, to focus on this relay, and that seemed to have been a prudent move as they nipped the Japanese by a tenth for the last spot in finals.

The Russians sloughed this prelims relay big-time, and it hurt bad as they were 10th in 7:11.86. That makes for a waste of Danila Izotov’s scratch in the 100 free prelims, as he could have been through to the semi’s. They had a 1:48.8 from Mikhail Polishchuk on the 3rd leg that put them too far behind even for a solid 1:47.3 anchor to make up.

Garcia is an interesting wild card, Did you see him close the second 50 meters? He came on like a freight train, passing everybody but Adrian.

oh, there is a new thread. posting in wrong place lol

didn’t catch if Roberts was in.

Garcia is not so overhyped at all.

I´ve been checking “Live Comments” and they said Cielo held off on the second part.. is that true?

Cielo was out fast, he looked good. he did seem to ease up a bit in the last 25 metres.

Cielo has a MAJOR weakness
He has Horrible Endurance and HORRIBLE recovery.. He is not the kind of guy than can go ALL out in sequence.. He will probably save everything for tomorrow.. on 50 free he does not have that problems..

another day of swimming.

I hate NOT BEING ABLE TO SEE!

is the link not working for you?

Blocked at my workplace