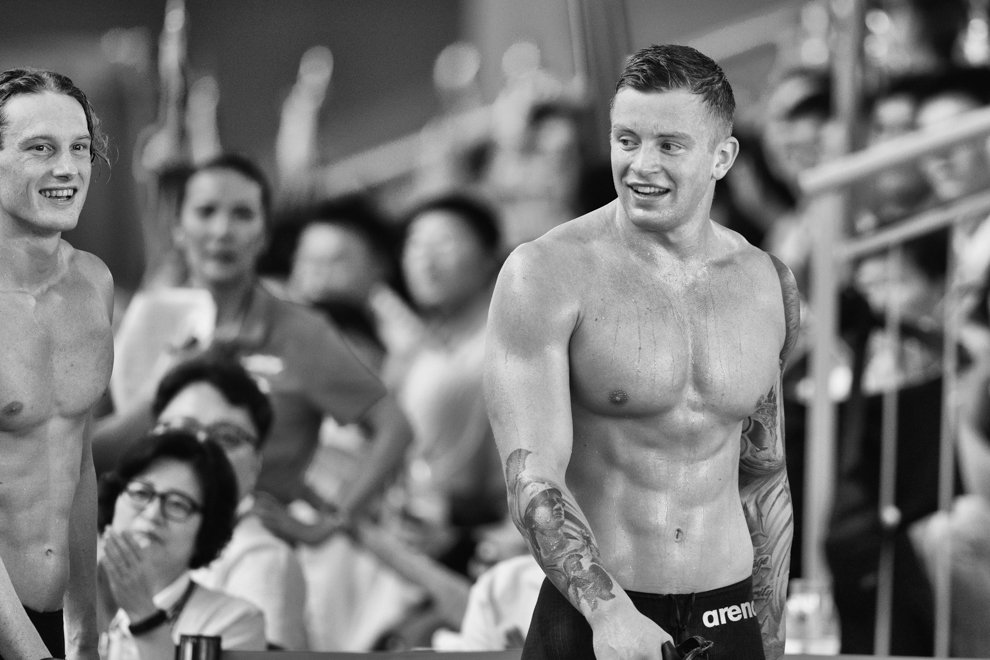 Adam Peaty and other members of the GB National Team will be making a return to the water after receiving endless pool's installed in their backyards. Current photo via “Rafael/Domeyko Photography”

Olympic and World Champion, Adam Peaty recently joined the growing list of athletes to find ways to train while pools remain closed. Peaty, along with other members of Great Britain’s national team, partnered with Bedfordshire Hot Tubs Limited as well as the Jacuzzi brand to receive Swim Spa’s, a flume pool similar to those made by Endless Pools.

The partnership was facilitated by Peaty’s training partner and former Youth Commonwealth Games Champion, Edward Baxter. Baxter, through his connections with the owner of Bedfordshire Hot Tubs Limited, and with the help of Mel Marshall, the coach he shares with Peaty, was able to secure eight pools to be temporarily installed at the homes of members of the English National Team.

Never thought I would be doing Vo2 sessions in my back yard! A huge thanks to @edwardbaxter98 for the connection with @bhtubs @jacuzziukspaandbath so I can train at home without putting people at risk. We don’t know when things will return to normal so this is a great tool to continue my training 🙌🏼🚀

In addition to Peaty, Anna Hopkin, who made waves this year in the NCAA swimming for Arkansas and is now training with Loughborough, Ben Proud, James Guy, marathon swimmer Jack Burnell, Luke Greenbank, Sarah Vasey, and Tom Dean all received pools installed at their homes. This puts them among a small group of swimmers in Great Britain able to secure water time, as the country remains in lockdown.

The full parade of swimmers 🔥 what a line up! Special thanks to @edwardbaxter98 for helping make the magic happen and @jacuzziukspaandbath @teamgb @britishswimming for their incredible support | full details of the collaboration between Jacuzzi Brands UK, Bedfordshire Hot Tubs and our legendary swimming team are in bio 🏊🏼🔥🇬🇧

While Swim England has yet to establish a set time table for the reopening of pools, it appears as if it may not be in the near future. Richard Lamburn, Swim England’s Head of Facilities, said that it would take roughly 3 weeks to get pulls across the country operating again once they are able to begin working on them.

While other countries struggle to find access to full-size pools, club teams in the United States are in the process of returning to the water. Beginning on May 1st teams such as the Mission Viejo Nadadores made a return to the pool, albeit under strict guidelines. The team is only swimming one athlete to a lane, meaning only 18 swimmers are able to train at one time.

England currently has roughly 125,000 confirmed cases of Coronavirus, with just over 25,000 casualties attributed to the virus.

The US national team should be getting supplements for systems like this if they don’t have access to the pool or the ocean.

A big problem is that manufacturing has been shut down in the US. The wait now for an endless pool is around 7 weeks. Low inventory. To get a pool to suit the needs of a competitive swimmer that is near or at national level cuts is not cheap. Ballpark cost is almost $40K. It’s not just a pool, it’s an investment and high performance machine.

Hardly anyone in Australia has had an endless pool put in. Some are tethering though .

Tethering is the most cost effective option unless you can find a sponsor to “lend” you a pool.

What do people think of training in an endless pool? They are great for instruction, but how about for building an aerobic base? Granted, something is better than nothing.