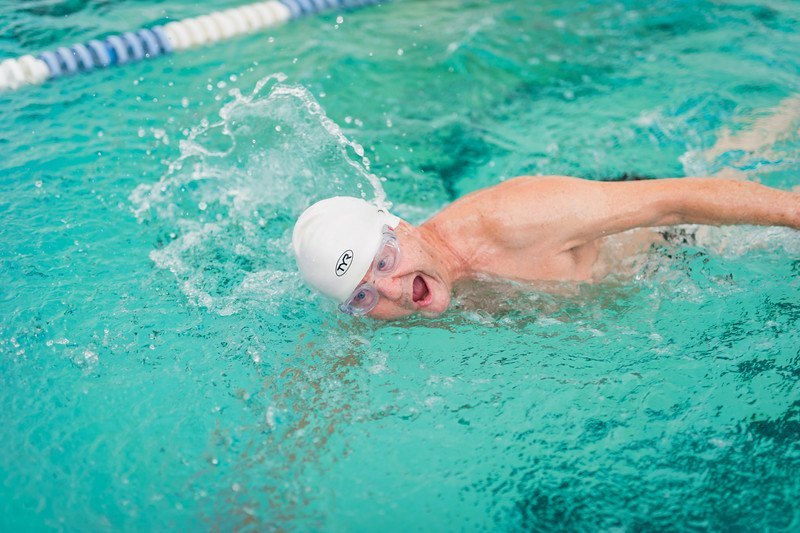 When 99-year old Willard Lamb was born, only two men had ever set the World Record in the 1500 free: Henry Taylor at the 1908 Olympics and George Hodgson at the 1912 Olympics.

Now, Lamb has written his own name into the record book in the event. Since he ages up this year, he competes in the 100-104 age bracket. At USMS Summer Nationals, Lamb took on the 1500 free, clocking 42:27.06 to set a world record and U.S. Masters Swimming record. As of May 31, 2022, FINA had no record ratified for Lamb’s age group, meaning that this is the first recorded swim ever by a man his age.

He set multiple records during the race, including USMS records in the 50 and 100 freestyle. His splits at the 200, 400, and 800 are new world and USMS records. Even though they took came during a longer race, they can still be ratified as official records since they’re timed from his start.

This isn’t Lamb’s first record, though. That came in 1940, when he broke the Washington 220-yard freestyle record as a senior at R.A Long High School. In a recent interview with the Seattle Times, Lamb said it was that record that made the University of Washington head coach approach him about joining the Huskies’ swim team. Lamb was undefeated in his first semester, but that first semester was his last, as he was drafted into service for the ongoing World War II.

In January, at the Bellevue Club Masters Mile, Lamb also set the first recorded FINA world records in the 400, 800, and 1500 short course meter freestyles for his age group. In the SCM 1500 free, he went 38:32.90. Below is video of him starting one of his races at the meet, courtesy of SPLASHForward.

Perhaps the wildest part of his long-course world record though, is that Lamb’s made up entry time was within three seconds off his swim. Lamb had never swum the race before in that age group, so he entered himself with a 42:30.00 seed time.

Lamb was undefeated in his first semester, but that first semester was his last, as he was drafted into service for the ongoing World War II.

That is some real stuff right there. Crazy to remember what some in that generation had to go through.

Just so cool and inspiring!

I had the opportunity to swim at Masters Nationals in 2021 with my 81 year old father in his first meet since childhood. His first race in about 70 years was a 200 long course backstroke!

Masters Nationals is the best! So meaningful to still be able to create great sports memories together at this point in life.

Yup. 100%. My dad and I swam in a relay at masters nationals in FTL many many moons ago. We also did the Miami Mile open water swim together.

42:27 for 1500 Long Course is a legit swim, the fact that Willard just turned 100 is a bonus. Watching him and other Masters swimmers last week was a joy and an privilege. Everyone in the meet had a story, the older the swimmer the richer the stories. No matter the swim the mantra in the building was always “did you have fun?”

Way to go Willard! It was fun seeing you compete =)