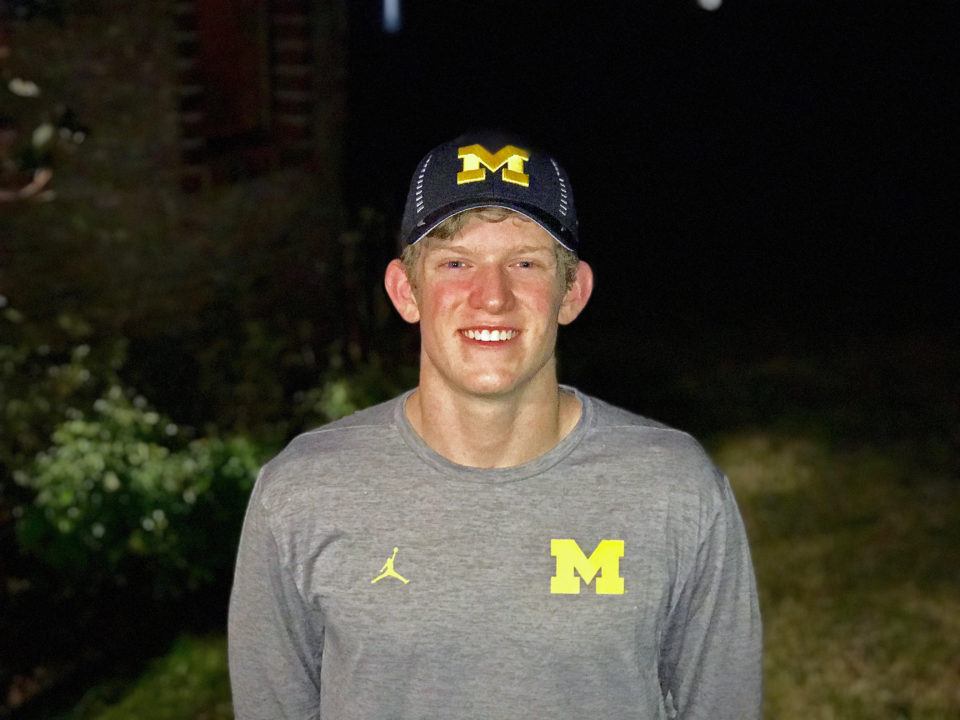 Callan from Bishop Kelley High School and Trident Aquatics Club in Tulsa, Oklahoma has verbally committed to Michigan. Callan is the number 6 recruit on our list of the top boys in the high school class of 2018. Current photo via Patrick Callan

Owasso, Oklahoma’s Patrick Callan, the #6 recruit on the SwimSwam list of top-20 boys in the high school class of 2018, has announced via social media that he will attend the University of Michigan in the fall.

“Pumped to announce my verbal commitment to the University of Michigan! Thanks so much to everyone for all the support! GO BLUE〽️?”

In club swimming, Callan placed 10th in the 400 free and 15th in the 200 free at Phillips 66 National Championships and World Championship Trials, earning a spot on the USA squad for 6th FINA World Junior Swimming Championships in Indianapolis, Indiana. There he competed in the 200m free individually, finishing just off the podium in fourth with 1:47.61. His best time, however, came leading off the men’s 4×200 free relay in 1:47.33, more than 1.22 seconds faster than the 1:48.54 he went at Nationals.

Callan is a great pick-up for Michigan. His best 500 time would have been 20th at 2017 NCAA Division I Championships, just 1/100 behind current senior PJ Ransford. His 200 flat-start time would have been second only to Felix Auboeck on the 4×200 free relay, and would have made him 21st in prelims of the individual event. He’ll have two years’ overlap with Auboeck.

Pumped to announce my verbal commitment to the University of Michigan! Thanks so much to everyone for all the support! GO BLUE〽️? pic.twitter.com/Cgu5C3X3XE

wow… such a shame… If he went to Texas he could have been so good ughhh. Bad decision on his part, but he was probably just scared to train hard and get better with them cause he would actually have competition unlike Michigan.

Mike Bottom and Pat Callan will prove you wrong.

felix auboeck is gonna be a pretty damn good training partner for him. congrats patrick

Yea that Felix Auboeck he’s not fast at all

I know the kid personally. He’s definitely not scared to train hard. He’s just been a huge Michigan sports fan. Pretty sure his father graduated from Michigan as well.

This kid is a little bit of a late bloomer but has been on a real roll the past year and a half… U.S. juniors are very deep in the mid-distance freestyle but he could break out to be the best in the bunch.

Good for him.
Could be the poor lighting, but that high schooler looks like he is in his late 20’s.

I was very impressed with his 1:47.3 this summer, as that meet was the first I’d heard of him. If he can drop just a tiny bit more he could be an important part of our 4×200 free relay for the major international meets

He had some strong races at JR Nats west, and when combined with times from the East, he was first or second in the 200 and 500.

Didn’t Kibler set NAGs in both those events?

Callan had the top time by the spring but he was not first or second as Balding Eagle said at Winter Jrs. And Kibler did set the 15/16 NAG at Winter Jrs. Callan must be older if his spring times weren’t eligible for the NAG.

Great to see a traditional powerhouse like Michigan pick up another mid-d guy… hopefully this helps establish some more parity amongst the top 10 teams.

not sure you can call them top 10 when they were 19th last year?

What are the chances of Robert Finke heading to Michigan after this?

slim or none…florida to michigan….that might be a stretch! not sure he looked at UM

Congratulations, Patrick! I know everyone involved in OKS is thrilled for you! Have a great senior year!