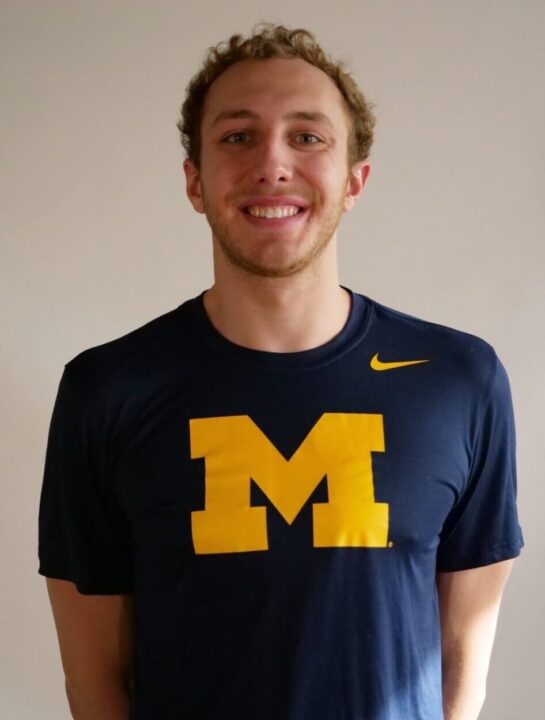 Daigle was the third-highest scorer for the Wolverines at the 2022 Men's Big Ten Championships. There Daigle won the 400 IM in a 3:41.01. Current photo via Jared Daigle

Michigan’s Jared Daigle has announced via Instagram that he will stay at Michigan to use his 5th year of eligibility. Daigle plans to earn his Master of Management (MM) at the Ross School of Business.

“ONE MORE YEAR. I’m so grateful and excited to be able to stay at Michigan for my 5th year. This team has become a family to me and there’s no place I’d be happier. We have unfinished business. Go blue!”

Daigle becomes the third announced fifth year for the Michigan men next year. Olympian Patrick Callan has already announced his return for the Wolverines and Clark Wakeland has announced his transfer from Georgia Tech for his fifth year.

Daigle recently helped the Wolverines to a third-place finish at the 2022 Men’s Big Ten Championships. He won the 400 IM in a 3:41.01, finished third in the 200 IM (1:43.63), and finished seventh in the 200 back (1:42.05). Daigle was the team’s third-highest scorer with 82 points only behind freshman Gal Groumi (87 points) and sophomore Jake Mitchell (84 points). Mitchell announced this week he will be transferring to Florida.

Daigle also competed at NCAAs for the Wolverines. Daigle finished 14th in the 400 IM swimming a time of 3:40.74. He also swam in the prelims sessions of the 200 IM and 200 backstroke. His return is key for the Wolverines as he was one of only two individual scorers for the team.

Athletes were allowed an extra year of eligibility due to COVID-19 during the 2020-2021 season. Many athletes took this extra year this season, but the number is expected to fall over the next few years. Another B1G star swimmer that has already announced his plan to take the extra year next season is NCAA Champion Max McHugh.

Daigle is currently a senior studying Applied Exercise Science at the School of Kinesiology. The Master of Management program is a one-year program.

Michigan has historically been one of the best swimming programs in the NCAA. They will be back some day, programs like that don’t just fall off the face of the earth, alumni and leadership won’t let it. They just need to figure out what needs to change and get back on the horse…

He went for it in the 200IM at NCs, leading his heat from an outside lane. Yes he died a little but sometimes that’s the way to go.

yep… there was another backstroker Rob Zofchak from Dexter, MI who graduated recently… another poster boy of improvement.

It’s refreshing to see Michigan get a vote of support.