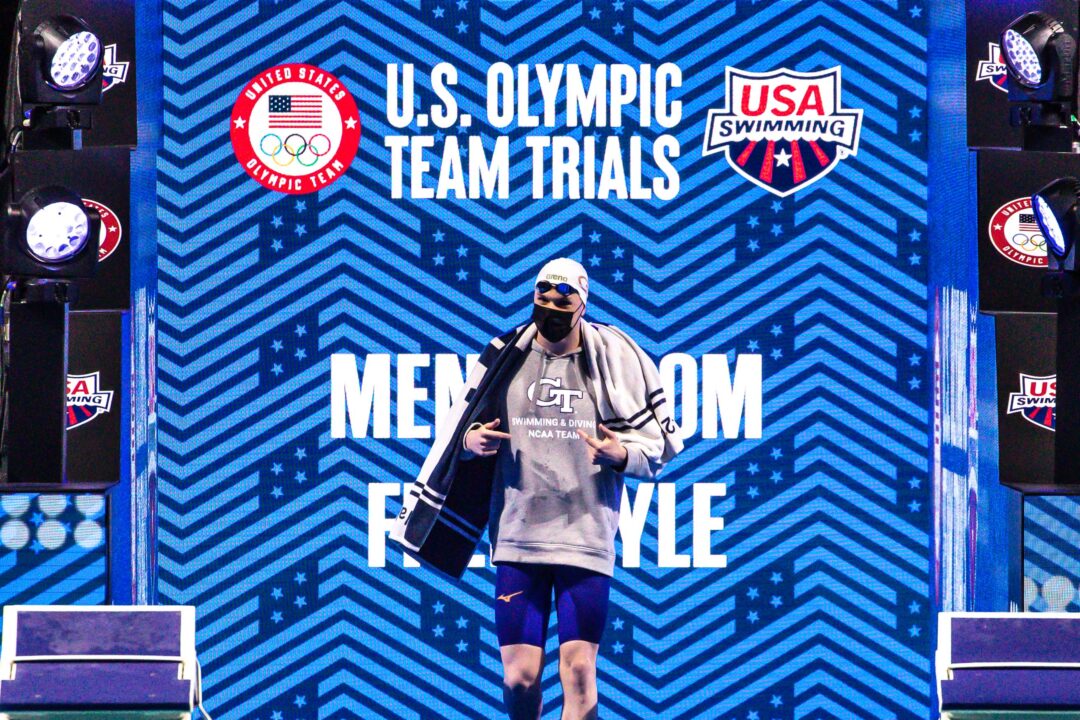 Clark Wakeland will use his 5th season of eligibility at the University of Michigan, where he will begin work on his master's degree in aerospace engineering. Archive photo via Jack Spitser/Spitser Photography

Amid a run of transfers out of the program, the Michigan Wolverines got some positive news on Saturday in the form of an incoming transfer.

Clark Wakeland announced on Instagram that he will use his 5th year of eligibility at Michigan next fall. He’ll begin work on his Master’s of Science in Aerospace Engineering.

Wakeland used his first four seasons of eligibility at Georgia Tech. At the 2022 ACC Championships, he was the team’s 8th-best scoring swimmer with 26 points, including a high-water mark of 14th in the 500 free (4:18.46).

Like other swimmers who raced in the 2020-2021 COVID-rittled NCAA season, Wakeland received an NCAA waiver allowing him to use a 5th season of eligibility. In the 2021-2022 season, the first where the waiver was available, athletes’ scholarships did not count against their teams’ caps if they stayed at the same school. Starting next season, however, those scholarships will count against team caps.

His 2022 split would have improved Michigan’s 800 free relay at the same meet.

Wakeland was effusive about his time at Georgia Tech in announcing his decision to transfer.

“Swimming at Georgia Tech was the best decision I’ve ever made, and what I’m most thankful for is the opportunity to meet so many amazing people who I get to call my friends,” Wakeland said. “All of my teammates and coaches I’ve had the privilege of getting to know at GT have made an impact on my life as a swimmer, as an engineer, and most importantly, as a person. I feel confident saying I’m leaving GT as a better person than when I first arrived. I’ll always be a Yellow Jacket🐝.”

The Wolverines have lost a number of swimmers to transfer this season off both their men’s and women’s team.

House is one of a number of Michigan men and women who have entered the transfer portal and/or announced a decision to transfer this season. Also within the last week, Greta Gidley, who wasn’t able to match her high school best times in a semester of racing at Michigan, entered her name in the portal.

Also entering the portal this season are Victoria Kwan (September) and Alexandra Klein (August), plus 5 other members of the men’s team.

NCAA qualifiers Patrick Callan and Jared Daigle both coming back for a 5th year.

Question. When is the last graduating year for those who can use a “5th” year?

Much needed dub for Michigan

Can’t believe we managed to get that 4th pic on swimswam.

I think it is housey not house

Michigan does have lots of scholarships to give now..

CDub is one of the brightest human beings I have ever met in my life! Working with him was a pleasure and an honor at the same time. I’m lucky to say I was part of his journey! UMich is a lucky team for having him around! CDub, have fun, my friend! And enjoy the ride!! See you on the other side!

CDub bout to reattach to CDub