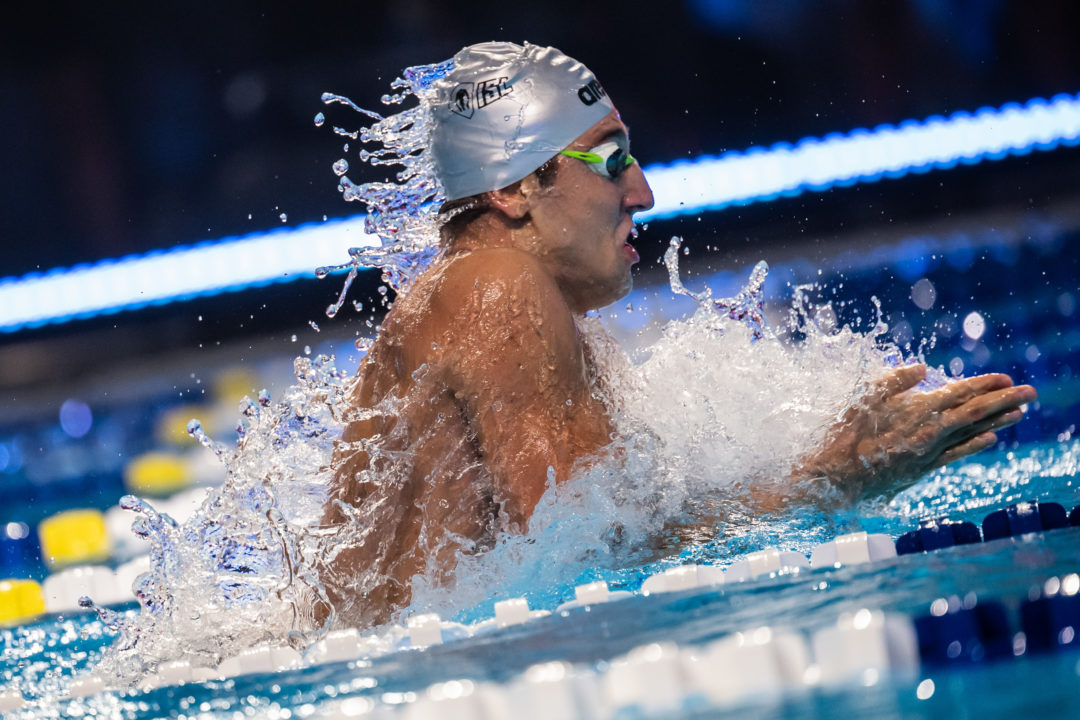 Just how good was Emre Sakci's 25.73 in the final round of the 50 breast skin race? We try to put it into perspective for other strokes. Current photo via Mike Lewis/Ola Vista Photography

Match 4 has wrapped – here’s what we learned:

Because it was the first men’s 50 breaststroke skin race, it’s hard to put into perspective just how good Emre Sakci has to be to go 25.73 in the final round.

In the individual 50 breast – just one round and coming pretty early in the event lineup on day 1 – only two men in the entire league have been under 26 seconds across four meets. Sakci’s 25.50 is the ISL leader and ISL record, and Ilya Shymanovich has been 25.64. Beyond that, no one has been better than 26.0.

So after an entire meet’s worth of swims – and two rounds into a brutal skin race format – Sakci went faster than anyone but Shymanovich has gone with almost total rest and prep time.

Sakci’s swim is like a freestyler going 20-point-mid in the third round, or like a women’s breaststroker going 28-high in the final round. His swim today was incredible, and it carried Iron to second place.

Sakci’s swim is like a freestyler going 20-point-mid in round 3, or like a women’s backstroker going right around 26.0. It was an incredible swim, and it powered Iron to second place.

So far this season, we’ve seen two very different strategies for filling out the 100 IM. Some teams have tended to use their 200/400 IMers, hoping their versatility will translate down. Others have filled the race with their best sprinters, hoping speed will make up for a specific focus on IM.

While the sprinters have been winning more often, IMers scored a lot of points today. The top three women’s finishers (Margalis, Abbie Wood, Meghan Small) are all probably better-known as IMers. We might be seeing a little disparity between the men’s event – where sprinteirs seem to dominate – and the women’s event, where IMers, even 400 IMers, have a better shot at placing highly.

This is the first year of the ISL’s new rules allowing the winner of the medley relay to choose the stroke for the skin race. So far, the medley relay winners are 8-for-8 in skins wins, suggesting that teams are indeed picking ‘correctly’ and maximizing their strengths.

The Power of Rest

While superstars like Caeleb Dressel have pulled insanely crowded event lineups, teams are taking a wildly different tactic with their support swimmers. Today’s meet showed the benefits of selectively lightening a swimmer’s event load to set up for one big event, if they’re not  superstar who needs to fill lots of lineup gaps.

Here are a few examples:

Another one:
Dos Santos winning an ISL event at 40!

-So far, breaststrokers have had an advantage in skins because they can have clean breathing every single stroke, and pullouts don’t just fall off like underwater dolphin kicks when you’re tired. Maybe not a fair comparison, but still a fantastic swim for Sakci on round 3. Similar to King going 28.90 on round 3 in the first match. -As expected, Andrew has gotten a bit better. He got a bit more rest this meet, and he was top-4 in all his events today. -Could team training be affecting performance? The Breakers had a great showing yesterday while they weren’t as on fire today, while it was the other way around for Iron. Was the Trident weaker this meet because they… Read more »

this is SUPER random, but I feel like it was a missed opportunity for David Nolan to miss out on the ISL. He would have thrived in this format. 12/12 NCAA individual finalist in his career.

Felicia Lee, Janet Hu and Ally Howe would’ve been amazing in this format

Australian swimmers are loosing out on important racing!

Doubt it bothers Australian s. Except for dingbat Melbourne, life is fine everywhere else .