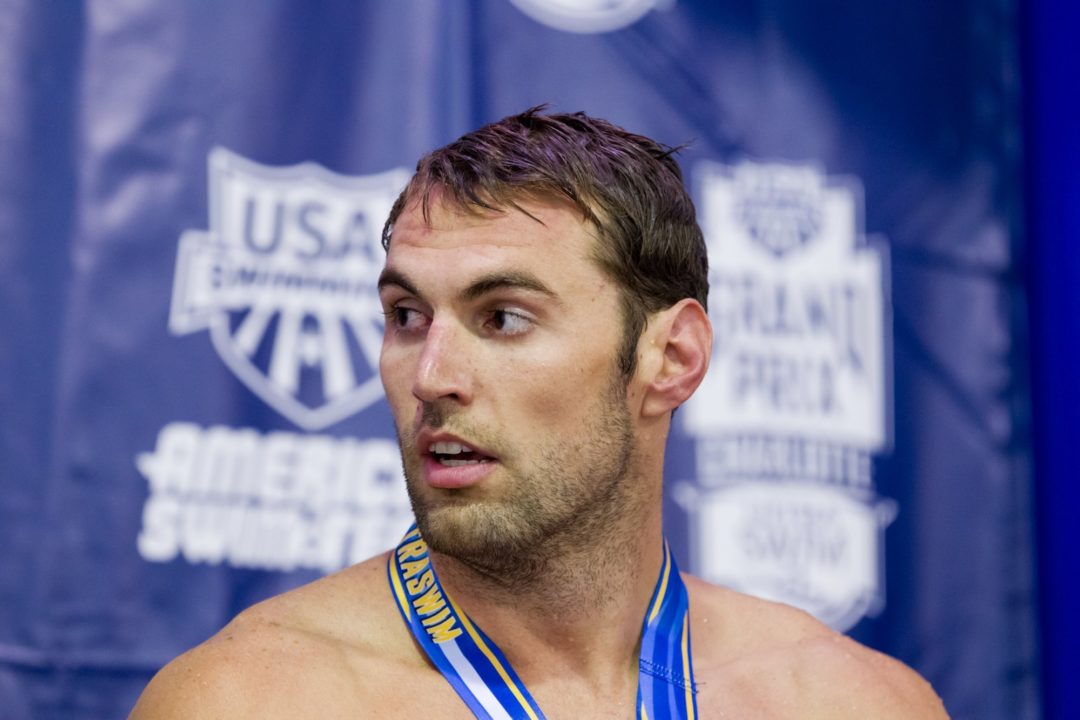 The 34-year old Matt Targett has been training for the last 2 months with his former Auburn coach Brett Hawke in Los Angeles. Archive photo via Tim Binning/TheSwimPictures.com

Two-time Australian Olympian and seven-time NCAA Champion Matt Targett is working on a comeback to competitive swimming, as evidenced by a 49.12 swim in the 100 short course meters free on Thursday evening in San Diego.

Racing at a private meet, complete with disco lights and a DJ, hosted by Team Elite in San Diego, the 34-year old Targett was one of a number of Olympians to have competed in the event.

Watch Targett’s Swim in the video below, starting around the 48 minute mark:

Targett’s last officially-sanctioned meet that we could find evidence of was in January of 2016 at a small meet in New York, though with a finish of 48.13 in the 100 yard free, he was far from his peak at that point of his career.

While his swim on Thursday won’t strike much fear into the future of Australia’s top sprinters, sources tell SwimSwam that he has been training under coach Brett Hawke for the past 2 months in Los Angeles. Hawke, an Australian-turned-American, was the sprint coach at Auburn while Targett was there as an undergraduate. While at Auburn, in 2009 he was part of the best sprint group in college swimming history, first overlapping with Cesar Cielo, and then after an Olympic redshirt finishing his season in 2009 where the Tigers won 4 NCAA relay titles, breaking NCAA Records in 3 of those events.

The record in the 200 free relay, which Targett anchored, still stands as the fastest ever.

The Australians, after the retirement of James Magnussen, do have a lack of depth in the 100 free – at last year’s World Championships en route to a bronze medal, they used the same 4 swimmers in prelims as in finals. That means that Targett, if he can get below a 49 in long course, has at least a chance at a prelims swim in Tokyo.

While Targett would have a tall mountain to climb in order to return to the international stage, that climb is certainly not unprecedented: earlier this year, Canadian Brent Hayden, who is 36, made his comeback after almost 8 years away from competition and hit an Olympic “A” qualifying time in the 50 free.

Targett is still the Australian Record holder in the 50 fly, and also ranks as the 7th-best 50 freestyler and 6th-best 100 freestyler in his country’s history.

After the 2012 Olympic Games, Targett began a career as a model.

So can he compete for USA given him and now american coach brett Hawke are based there ?

No. It’s whatever country you have citizenship with and my guess it’s only with Australia.

Any other results from this meet?

Full results are available here. Abrahm Devine’s time in the 400 IM is wrong and some of the splits are wrong as well.

I hope to be still swimming mid 30s. Whether it be masters national meets, speedo sectionals, and long distance open water swims!

I love this! Ervin, Torres, Alshammar, Frolander, etc opened the door for swimmers in their mid-30s to continue to be great… glad to see more and more people following the trend!

Schoeman = doper. Don’t need to mention him with the rest.

Missed a prime pun opportunity in the title for him to “target” a comeback.

I’m embarrassed for us