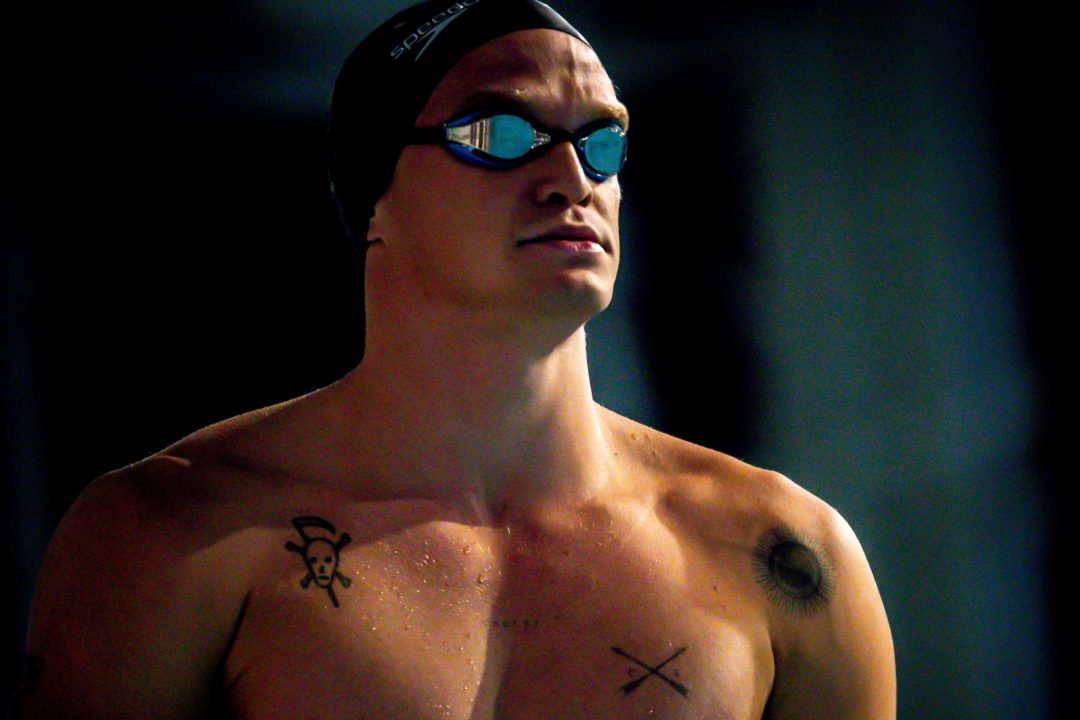 Australian pop star Cody Simpson, Olympian Kathleen Baker, and other notable names made their return to racing on Thursday at a meet hosted by Team Elite. Current photo via Jack Spitser/Spitser Photography

Some of the best swimmers from around the San Diego area participated in a private meet hosted by Team Elite on Thursday night. Supplemented by a DJ and disco lights, several notable names raced for the first time since the coronavirus pandemic shut down pools across the country.

Over the course of his music career, Simpson has released 3 studio albums and was the opening act for the European leg of Justin Bieber’s Believe tour in 2013. His first single went to #19 on the Australian charts and reached #12 on the Billboard Top 100. He’s had 3 singles achieve Gold status, and his album Surfers Paradise reached #10 on the charts in the US and #2 in Canada.

Simpson also made an appearance on the show “Dancing with the Stars” in 2014 and most recently appeared on Australia’s version of “the Masked Singer”, where he won the show.

This was at least Simpson’s second appearance at an American swim meet in the past year. In October of 2019, Simpson competed at the Trojan Invite, where he competed in his traditional event, the 100 butterfly.

In the first event of the night, the women’s 100 freestyle, former US National team member Linnena Mack emerged victorious, beating the field by several seconds to finish in a time of 53.40 seconds. Mack is a member of the ISL’s LA Current for the 2020 season, so this swim bodes well for her heading into the season that begins in about 2 weeks.

In the men’s 100 freestyle, Greek World Championships silver medalist Kristian Gkolomeev and German Marius Kusch held a tight battle throughout the entire race. At the wall, Gkolomeev touched first, finishing in a time of 47.81 to Kusch’s 48.86. Gkolomeev’s time fell only a few tenths short of his best (47.30) from the 2017 European Short Course Championships.

A few events later, Olympian and former world record holder Kathleen Baker swam her signature event, the 100 backstroke. Touching in a time of 56.96, Baker bested the rest of the field by almost 2 seconds. Like Gkolomeev, Baker’s time came in slightly off of her best time of 55.91 from the 2018 World Cup stop in Eindhoven. Baker, who competed in the ISL as a member of the LA Current last season, won’t race in the upcoming season.

Coming in second to Baker in the 100 backstroke was Team Elite’s Kendyl Stewart. Traditionally a butterflier, Stewart finished in a time of 58.55, coming in .2 seconds off of her best time that was set at the 2013 Duel in the Pool.

Trinidadian Olympian Dylan Carter dominated the men’s 100 backstroke, cruising to a final time of 51.56, which won the event by over 8 seconds. Carter does not have a 100 SCM backstroke time officially registered, but his swim is significantly faster than his best LCM 100 backstroke time (54.04) converted to SCM (52.82).

Shortly after her 100 backstroke, Baker came back to take 2nd (1:02.21)  in the 100 IM behind Israeli IM-specialist Anastasia Gorbenko. Finishing over 3 seconds ahead of the field, Gorbenko touched in a time of 58.99 to take over a second off of her personal best 1:00.07 from 2019, marking her first time under the 1:00-barrier. For Gorbenko, this was also an Israeli Junior Record, and the second fastest time in the nation’s history behind Amit Ivry’s 58.66.

In the men’s event, current Team Elite member and former Stanford NcAA Champion Abrahm DeVine also dominated the field, finishing 4 seconds clear of his nearest competitor in a time of 54.01. This was DeVine’s first time swimming the 100 IM in the SCM pool.

German Olympian Jacob Heidtmann ran away with the win in the men’s 200 freestyle, finishing in a best time of 1:45.68. This marked about a second drop for Heidtmann, who’s previous best was 1:46.28 from 2013.

Finishing out the meet, swimmers competed in 50 freestyles “skins” events, mimicking the ISL’s format. In the women’s event, Mack out touched Stewart 24.88 to 25.69 for the victory. Mack touched first in each of the rounds, dropping exactly .11 per round throughout the event by going 25.10/24.99/24.88.

In the men’s event, Belarusian Artyom Machekin came in ahead of Gkolomeev, 23.07 to 23.30 to claim the victory.

I mean good for him for staying in shape and working out but he might wanna stick to singing. He’s not making any Australian national team anytime soon

Perhaps he is swimming for a reason other than being an olympian?

This may sound crazy but maybe Cody has been successful enough to justify spending some time on other hobbies? Just a thought.

This is such an odd sentiment – the implication is no one should swim (or play any sport?) unless you’re set to compete at elite international level.

Absolutely, and Drake should stop playing 3 on 3 because he’ll never make the NBA finals.

For someone who has been out of the sport and make a comeback of sorts in the 12-18 months is amazing.
His 50 free time would get him Aussie
SC qualifying.
With Matt Targett back swimming too.
It Can’t hurt at all.
At the end of the day Old mate, Cody
Is enjoying it.

i’d say this is one of the coolest, most relevant swimming stories yet. along with Zac Efron being on Conor Dwyer’s relay team for a California based pier to pier swim, it is always awesome to see mainstream anything mix with swimming- it’s great for our sport. please keep this kinda thing going. all are welcome to compete.

Young Zac Efron has found love in
Byron Bay NSW with a young lady.
By all reports he is loving it there.
The Hemsworth clan live there.
Apparently Zac has bought a fixer upper
There too.

Is Marsh going to Budapest?

I think it’s pretty cool quite honestly. Whatever brings positive attention to this sport I support 100%.