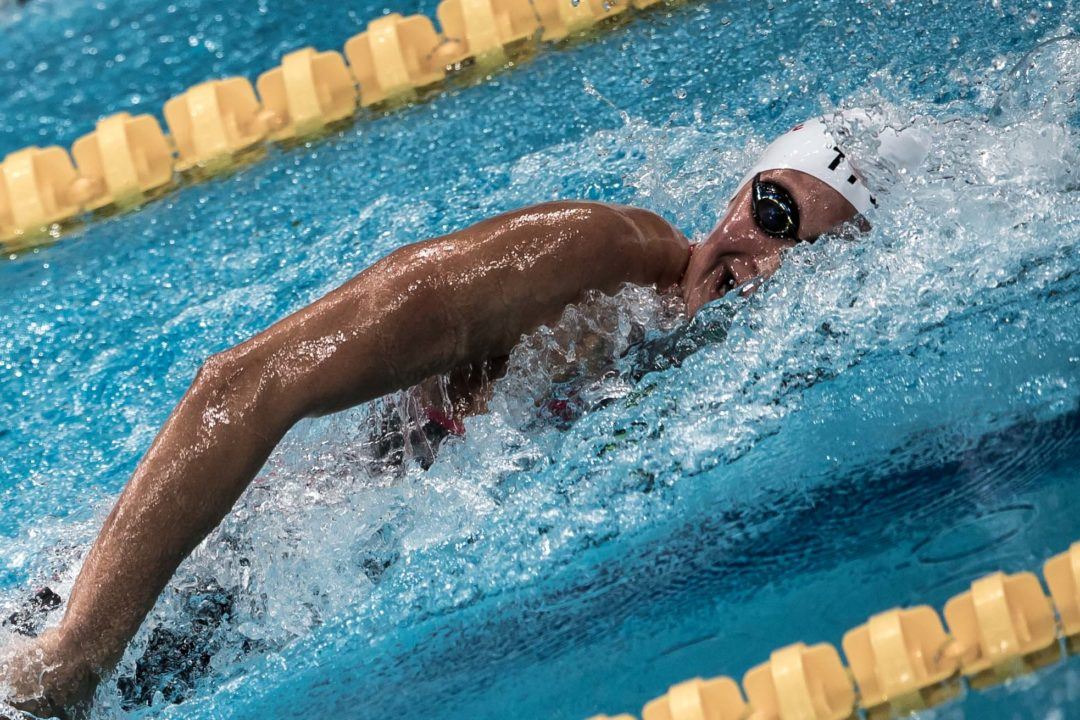 Three-time Olympian Charlotte Bonnet is in position to book her qualifying spot for the 2022 World Championships tonight in the women's 200 freestyle. Archive photo via Mike Lewis/Ola Vista Photography

It will be an action-packed third night from the 2022 French Elite Championships after we saw some blistering prelim swims on Thursday morning.

Both Grousset (50 fly) and Salvan (200 free) have already earned wins here at the competition and qualified for Worlds, but one swimmer who hasn’t but is in position to do so today is Charlotte Bonnet.

The women’s 50 back will also be a big event for Analia Pigree, who came into yesterday’s 100 back in line for a World Championship spot but ended up on the outside looking in. The National Record holder in the 50, Pigree will rematch with the two women who snagged those Worlds spots in the 100, Emma Terebo and Mary-Ambre Moluh, in the 50 tonight.

Antoine Viquerat (27.92) edged out Carl Aitkaci (27.94) for the victory in the men’s 50 breast final, reversing the order the two finished at the French Elite Championships in December.

At the meet in Montpellier, both swimmers established their best times, with Aitkaci winning in 27.66 and Viquerat placing second in 27.73. A French Record would be required to hit the FFN Worlds cut of 27.33.

Mary-Ambre Moluh adds a second event to her World Championship schedule in two months as the 16-year-old edged out Analia Pigree for the win in the women’s 50 back in a time of 27.70.

Moluh, who was second in the 100 back last night, betters her previous best time of 27.76 and breaks the French Age Group Record for 17 & under girls.

Pigree, who set the National Record of 27.39 last August and had gone 27.41 at the championships in December, was just .02 back in 27.72 to officially qualify for the World Championships after missing out in the 100 back on Wednesday.

Beryl Gastaldello had her fastest performance in three years to get on the podium in third, clocking 28.22 to beat 100 back winner Emma Terebo (28.42).

After putting up the fastest time in the world this year in the prelims, Maxime Grousset reset that mark in tonight’s final of the men’s 100 freestyle with a definitive victory in 48.03.

The 22-year-old once again employed similar tactics to what we saw in the prelims, flipping in 23.33 before closing in a blazing 24.70.

Grousset had gone 48.09 in the heats, which edged out what Lewis Burras did in the British Trials prelims (48.15) in Sheffield, England. The finals session there will start at the top of the hour (1:00 pm ET).

Grousset owns a best time of 47.52 from the Tokyo 2020 Olympic Games, doing so leading off the 400 free relay before placing fourth in the individual final.

Placing third was Charles Rihoux, who clocked 49.25 to hold off 18-year-old Nans Mazellier (49.50). Rihoux owns a PB of 48.81 and tied for second behind Grousset at the French Elite Championships in December in a time of 49.09.

The FFN qualifying criteria for Worlds has a 3:14 as the required add-up to earn the top four finishers in this event a relay berth in Budapest. The add-up for these four times sits at 3:15.29.

Trailing by eight-tenths at the final turn, Noyan Taylan held steady down the last 50 of the men’s 200 fly to overtake the fading Jaouad Syoud and claim the win in a time of 1:57.23.

The swim for Taylan marks his second personal best of the day, having gone 1:57.47 in the prelims to take out his previous mark of 1:57.70. He misses the World Championship qualifying time of 1:56.71 by just over half a second.

For Syoud, an Algerian native, he sets a new National Record for the second time in as many swims, clocking 1:57.88 to edge under his prelim showing of 1:58.10. Coming into the meet his record stood at 1:58.92, set in March on the Golden Tour in Marseille.

Taking third was Clement Secchi, who knocked just over a tenth off his best time in 1:58.72. Secchi won the U SPORTS (Canadian university) title in the SCM 200 fly last month in a time of 1:54.61.

Charlotte Bonnet unleashed her fastest swim since 2019 en route to a big victory in the women’s 200 freestyle, touching in 1:56.47 to blow by the World Championship cut by more than two seconds.

Bonnet’s time betters what she managed to produce at last summer’s Olympic Games (1:56.88), and moves her into sixth in the 2021-22 world rankings.

A three-time Olympian, Bonnet’s best time in the event stands at 1:54.95, set at the 2018 European Championships where she won the gold medal in dominant fashion.

Lucile Tessariol knocked two-tenths off her PB to place third in 2:00.44.

Swimming out of the ‘B’ final, Russia’s Anna Egorova delivered an impressive time of 1:57.95 to mark her second-fastest swim ever, trailing only the 1:57.58 she produced in December 2020.

Damien Joly went on the attack early in the men’s 800 freestyle, pulling away from the field on the front-half before picking up a three-second victory in a time of 7:51.25.

In a tight race for second, 400 free winner Joris Bouchaut (7:54.37) held off Logan Fontaine (7:54.71) to finish in the runner-up position, both splitting 27s on the last 50 in a mad-dash. The two men, who own best times in the 7:52 range, fall slightly off the qualifying time for the World Championships of 7:53.11. Fontaine is notably qualified to compete in Budapest in open water.

Another swimmer qualified for the World Championship team in open water, Marc-Antoine Olivier, took fourth in 7:58.89.

David Aubry, who set the French Record of 7:42.08 en route to winning bronze at the 2019 World Championships, tried to go with Joly early but fell off the pace and ended up seventh in 8:03.48.

Grousset, Salvan and Moluh added events to their Budapest schedules on Thursday, while Pigree, Bonnet and Joly officially qualified for the first time.

He posted a 100 fly time in the last year… maybe something happened in his recovery?

What are Gastaldello’s chances to make the team?

Sorry. I couldn’t be present for the live.

Most notable swims for me are Grousset and Salvan in the men’s 100 free.
Salvan confirms his 200 free performance. 2 years before Paris 2024 he knocks on the door of the top international level in the 100 and 200 free. He’s on track to be 47 mid in 2 years.
Very promising swim for Grousset. 48 low right now while it was more like a training meet for him is pretty good.
He’s on track to swim 47.2 at worlds and win a medal there.
For the rest nothing very surprising.

Is the 8:03 from Aubry not “notable”? What the heck was he thinking with that tactic? For such an experienced swimmer, you’d expect more, no? Also, Manaudou not focusing more on the 100 freestyle hurts the Nat’l team, he wasn’t going to qualify for breaststroke on this form any way. The 200 butterfly record will stand for another 10 year’s. French and German team’s have been the most frustrating over the last 10-15 year period. So much talent, but looking at paper plane’s when thing’s really matter. This will be the smallest French team for how many year’s?

I think Flo is trying to find some fun in what he does by adding some variety. I found his performance quite admirable for someone who hasn’t raced breastroke in years. Additionnally he might be working on some IM races (a man can dream haha)

This is true, he did take a lot of time off to have fun with handball. Was hoping it’d renew his commitment to the sport.
It’s always a bummer to play the “what if” game, as a fan and athlete.