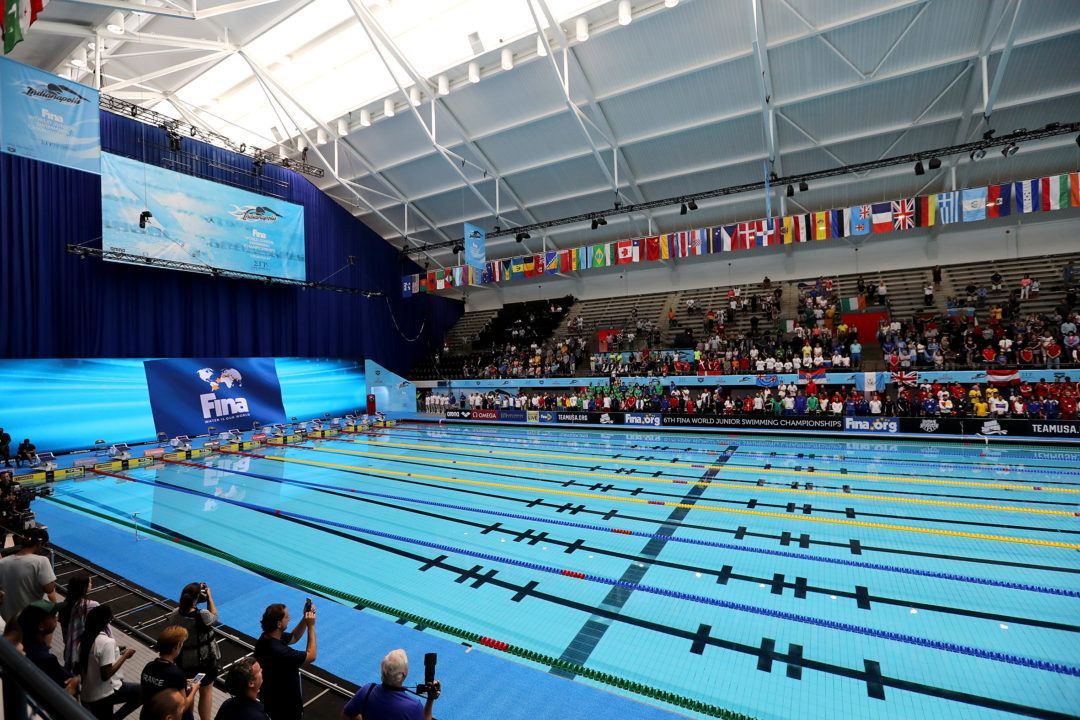 The FINA Swimming World Cup Series will return to the United States for the first time since the 2005-2006 season as one of two North American stops. Archive photo via Satiro Sodré/SSPress/CBDA

Riley Overend contributed to this article.

FINA has set a three-meet schedule for the 2022 FINA Swimming World Cup Series, including a historic return to North America.

The 2022 series will be raced in short course meters.

The only other North American country to have hosted is the United States, which hosted 10 times between 1998 and 2006. Most recently that was a 5-stop run in East Meadow, New York.

Indianapolis has hosted once before, in the inaugural year of the series in 1988-1989.

Berlin has been a regular stop on the tour over the last 25 years. The city has hosted the series 20 times, which is more than any other city. Beijing is the next-closest host frequency with 15 bids, followed by Moscow and Paris with 14 each.

The cancellation of the 2022 International Swimming League season has thinned out the global swimming calendar a little bit, but a number of major international meets, including long course and short course World Championships, Asian Games, European Championships, and the Commonwealth Games, has still left a narrow window of competition for this World Cup Series.

The Berlin stop will be at the famed SSE in the Northeastern part of the city. The pool is considered one of the fastest in the world in short course meters and has been home to a number of World Record swims – including 5 current short course World Reords:

The facility includes a 50 meter competition pool and a separate 25-meter warm-up/cool-down pool. The venue offers permanent seating for 2,000 spectators with the ability to expand to 4,500 for major events.

The SSE facility hosted the 2002 and 2014 European Championships, among other events. The pool (and adjacent velodrome) is unique in that it is built mostly underground, surrounded by a large park with hundreds of apple trees.

Opened in 2014, the TPASC is a $205 million facility that can hold up to 6,000 spectators. Its construction represented the largest federal investment in amateur sport in Canadian history. In 2015, it was the site for the Pan American Games.

While no records have been set in the TPASC yet, nine current Canadian Records were raced in the pool.

The pool has two 50-meter pools, a separate diving pool, a separate training facility, and seating for 2,277 (reduced from 6,000 for the Pan American Games).

The facility includes a 50 meter competition pool, a separate 50 meter instructional pool, and a 25-yard diving well (that has hosted a number of high profile events in its own right).

When do tickets go on sale?

Wow, remember when the World Cup had over 10 stops?? Different times indeed.

These last couple of years made me appreciative of these meets

Will we See Ryan Lochte?

2011 in October, at the 2011 FINA Swimming World Cup in Berlin, Missy Franklin set the first world record of her career in the 200-meter backstroke SCM, bettering the previous record of 2:00.13 held by Shiho Sakai with a time of 2:00.03. Way to go Missy and Todd!

It was swum in the pool listed above.

Maybe reading the article would help you. There is a big section listing all the world records performed at the Berlin pool with a mention that this pool is one of the fastest SCM pools in the world. They missed the record listed by Roach. Good catch.

Yes! Excited for this. Blocking my calendar for Toronto…hopefully they’ll allow spectators by then.

100% … this will be great. If the Raptors and the Leafs can be back at full capacity, swimming should be.

“The only other North American city to have hosted is the United States.” Huh?

I think it is long course

Usually the 100 IM is swum SCM

You could like read the Article in which it says it is in SCM.