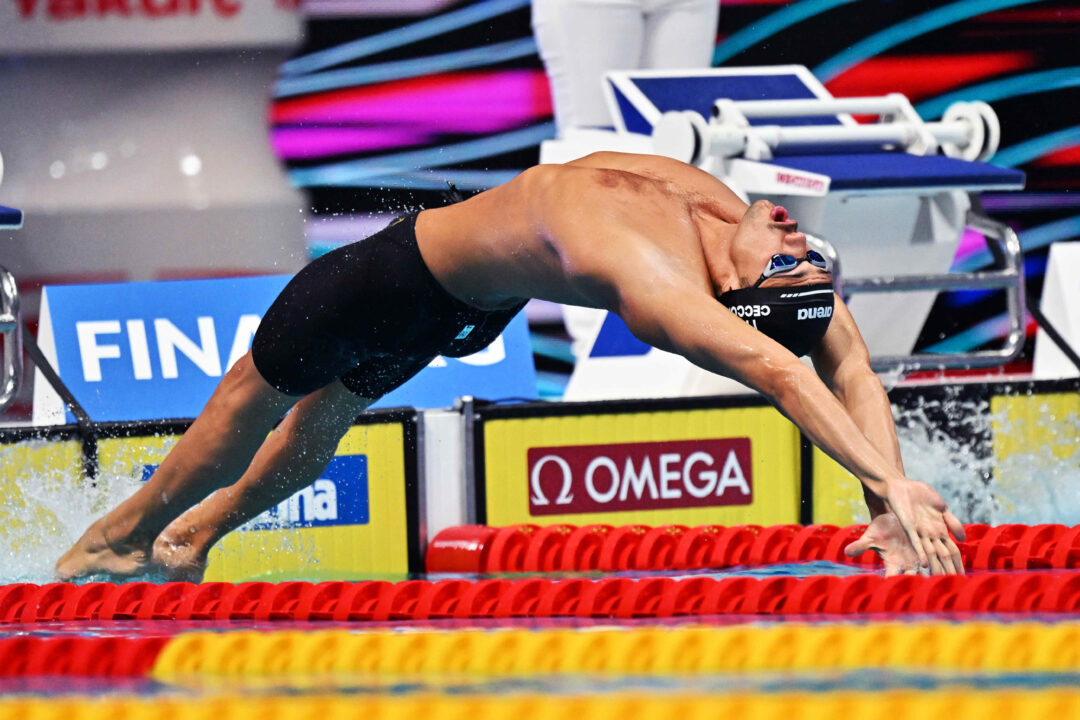 Thomas Ceccon, the new world record holder in the 100 backstroke, is the clear favorite in that event at 2022 Euros, but is a medal threat in the 50 as well. Archive photo via Gian Mattia D'Alberto - LaPresse

While the men’s backstroke events at the 2022 European Championships are missing some big names and medalists from the 2020 edition, they still project to be some of the most exciting races of the meet. That’s thanks to the large crop of European backstrokers that have emerged this season as serious contenders, some from the 50 all the way up to the 200.

This is one of the events where we will see a total podium turnover from the 2020 European Championships, as Kliment Kolesnikov, Hugo Gonzalez, and Robert Glinta all aren’t racing at this edition of the meet. However, at Worlds, there were several European sprint backstrokers who had breakthrough meets, which promises an exciting race in this rematch in Rome.

Ksawery Masiuk, Thomas Ceccon, and Apostolos Christou placed third through fifth at Worlds. Masiuk won the bronze medal, touching in 24.49, just a hundredth off the Polish national record he set in semis. Masiuk then won this event at European Juniors. He’s not racing the 200 back at this meet, instead focusing on the 50 and 100 backstroke like he did at Worlds. In his third major meet of the summer, that might turn out to be a wise choice, as he’s a medal favorite in both his events but faces tough competition.

Ceccon is the clear favorite in the 100 backstroke and though he’s still certainly in medal contention here, it’s a bit less clear cut. Like Masiuk, he set a national record in the Worlds semis (24.46), but added time in the final and ultimately just missed the podium. Though a 50 race always carries a level of unpredictability as it hinges on doing everything perfectly at the correct time, it would be surprising if Ceccon walked away without a medal in this event.

Christou followed Masiuk and Ceccon’s trend: in Worlds semis, he set a national record, then added time in the final. At the 2020 European Championships, Christou finished fourth and is sure to be eager to step onto the podium. Ole Braunschweig broke the German record in Worlds prelims, swimming 24.58 before adding time through every round and finishing seventh. Braunschweig should be a factor in the final, but he’ll need to reverse that trend.

Also looking to get involved in the action will be Yohann Ndoye Brouard and Michele Lamberti. Ndoye Brouard hit a personal best of 24.79 in Budapest, and has been having a strong season so far. He’ll likely need another drop to contend for a medal, but based on his trajectory so far, it’s certainly possible. Lamberti will try to double up on Italians on the podium; like Ndoye Brouard he’ll probably need to drop to make that happen as he’s been 24.86 this season, just off his lifetime best 24.70.

Someone else to keep an eye on is Bjorn Seeliger. It would be surprising to see him in the medal hunt, but Seeliger had an incredible 2021-2022 NCAA season, which included him showing off his backstroke prowess. He didn’t race individually at Worlds, suggesting that this is his big taper meet for the long course season. Will he be able to translate his yards success into the big pool?

Though Olympic gold and silver medalists Evgeny Rylov and Kolesnikov won’t be in attendance, half of the field from the Worlds 100 back final will be. That was 0ne of the fastest men’s 100 back finals in history, with three men under 52 seconds, capped off with a new world record.

Newly-minted world record holder Thomas Ceccon is the favorite here. Not only does he own the fastest time ever at 51.60, but he’s the only one in this field to have broken 52 seconds. He was on fire in Budapest; in addition to his world record he set Italian records in the 50 back and 100 fly and he’ll look to follow up his Worlds title with a win in front of a home crowd.

17-year-old Ksawery Masiuk has asserted himself as a medal threat not only in the 50 back, but in the 100 as well. He reset the Polish national record multiple times en route to his sixth-place finish at Worlds, going from 53.40 to 52.58 during the meet. At European Juniors, he swept the backstroke events. Over the course of this season, he’s shown that he’s capable of contending at every level–what kind of form will he bring to his third international championship this summer?

Ceccon and Masiuk weren’t the only ones setting 100 back records in Budapest. Greece’s Apostolos Christou set a national record in the semifinals (which also stood as the Worlds Championship record until the final). In the semis, he clocked 52.09, close to that 52 second barrier. He added time in the final and wound up fifth, but if he’s on form, should be squarely in the medal hunt here.

The fourth Worlds finalist also racing at Euros is France’s Yohann Ndoye Brouard, who finished fourth in Budapest in a lifetime best 52.50. He’s had a strong season so far, and will look to keep that rolling in Rome. He’s seeded third and showed at Worlds that he can contend with Ceccon, Masiuk, and Christou and will surely be in the mix for a medal.

It’s also worth keeping an eye out for Ndoye Brouard’s teammate, Mewen Tomac. He sits slightly off the pace of the first four, with a season best of 53.41. His lifetime best is 52.86 from 2020 Euros, and he’ll need to get closer to that to make a push for a medal.

Lurking way down the psych sheet in 22nd is Brodie Williams, with the 54.48 he went at British Championships in April. He’s already bettered though; at the Commonwealth Games he earned silver in a lifetime best 53.91, breaking 54 seconds for the first time. That time would launch him up to ninth on the psych sheet so while it would be surprising to see him vie with that favorites for a medal, don’t be shocked if he grabs a lane in the final.

With six of the Worlds finalists racing in Rome (all but the Americans), the 200 back projects to be another close race. The two highest European finishers at Worlds were the Brits, Luke Greenbank and Brodie Williams, who earned second and fourth, respectively.

At the Commonwealth Games, Greenbank looked like he was about to win gold, then he faded to fifth while Williams took the win. Greenbank has the fastest lifetime best in the field; will he be able to rebound from disappointment in Birmingham? Williams set his lifetime best of 1:56.16 at Worlds, and if he and Greenbank are both on form, they’ll be a tough duo to break up.

The other pair of teammates and 200 back Worlds finalists that will be in the field here are the Hungarians, Adam Telegdy and Benedek Kovacs. They finished sixth and eighth in that final, respectively, and will be hungry to climb up the standings. Of the pair, Telegdy likely has a better chance to medal: he has the faster personal best at 1:56.15, and was within range of that at Worlds at 1:56.91. Kovacs added almost a second and a half between the semis and finals in Budapest, which he’ll need to avoid repeating if he wants to be a factor in the final.

Continuing our trend of 200 backstroke pairs, two men who could also make some noise in this event are the Frenchmen Mewen Tomac and Yohann Ndoye Brouard. Tomac finished just off the podium at Worlds in fourth, but with a lifetime best 1:56.35. That time puts him squarely into medal contention; on the psych sheet, he’s tied for fifth with Nicolas Garcia Saiz, who posted his mark at the Tokyo Games and hasn’t been close to it this season. Ndoye Brouard has a lifetime best 1:56.10 from 2021, and will look to improve on his tenth place finish at Worlds. He’s set lifetime bests in the 50 and 100 back this season, could he have a drop in the 200 in store?

The 2020 bronze medalist, Roman Mityukov is seeded fourth. He finished seventh in Budapest in 1:57.45, adding about four-tenths from the semis. He earned his bronze at the last edition of this meet in a lifetime best of 1:56.33 (out-touching Ndoye Brouard) and in this field will likely need to be around that time to defend his medal.

Another entry to note is Germany’s Lukas Märtens, who’s had a huge breakthrough in distance freestyle this season. There have been rumors about which distance events Märtens and his teammate Florian Wellbrock will swim, and it’s not clear if Märtens will swim this event. But he went a lifetime best 1:56.97 this season and is seeded 11th, which means that if he does swim it, he’s capable of a semifinal swim and has an outside shot at a lane in the final.

Ceccon never set an Italian record in the 100 fly. I think you meant the 50.